What is a greenhouse gas? Definition and Meaning

A greenhouse gas is an atmospheric gas that absorbs and emits radiation within the thermal infrared range. In other words, it helps keep the planet’s surface warm. This process is the fundamental cause of the ‘greenhouse effect.’

The greenhouse effect is the natural process by which a planet’s atmosphere traps some of its Sun’s energy. Subsequently, the atmosphere becomes warm enough to support life.

If it were not for the greenhouse effect, we would not exist. In fact, most life forms would probably not exist. 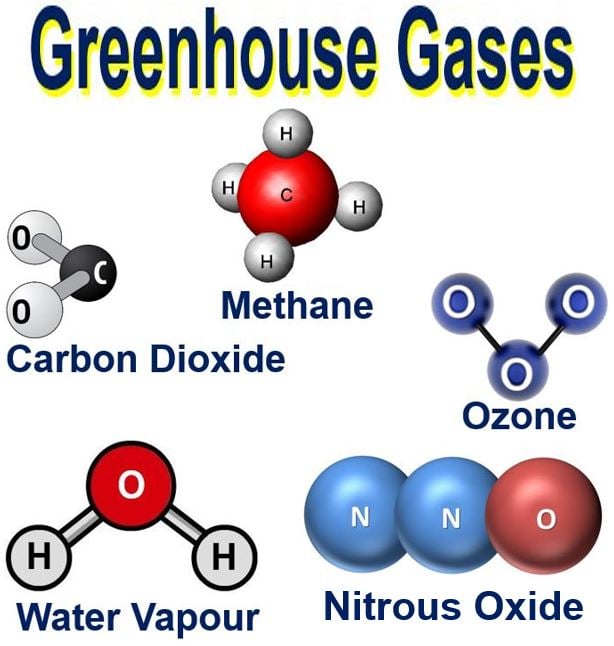 These are the most common greenhouse gases.

The primary greenhouse gases are:

Without these greenhouse gases, the temperature of the Earth’s surface would be 0°F (-18°C) rather than its current 59°F (15°C). Additionally, the difference in temperature between night and day would be more extreme. Conditions here would be more like the Moon’s, i.e., extremely cold and extremely hot.

Other planets in our Solar System – Titan, Mars, and Venus – also have greenhouse gases. A graph showing changes in the annual greenhouse gas index (AGGI) between 1979 and 2011. The AGGI measures the levels of greenhouse gases in the atmosphere based on their ability to cause changes in our planet’s climate. (Image: Wikipedia)

Greenhouse gas concentrations have been ideal for life most of the time for hundreds of millions of years. On occasions, they have fluctuated, and life on Earth has either thrived or deteriorated as a result.

There have been several mass extinctions, i.e., when a large percentage of all life forms on Earth vanished. Greenhouse gas levels were partly to blame.

At the moment, environmentalists, other scientists, and a growing number of lay people worry that greenhouse gas concentrations are rising too high. The higher they go, the warmer our planet will get.

If the ice in and around the North and South Poles melts, sea levels could rise considerably. If the polar caps melt, many low-lying coastal cities, towns and villages will be under water.

Since 1750 – the beginning of the Industrial Revolution – human activities have produced a forty percent increase in CO2 concentrations in the atmosphere. CO2 concentrations rose from 280 ppm (parts per million) in 1750 to 400 ppm last year.

Greenhouse gas emissions due to human activity come mainly from the combustion of fossil fuels. For example, natural gas, oil, and coal are fossil fuels. Soil erosion, livestock agriculture, and deforestation have also contributed to the higher greenhouse gas concentrations.

If greenhouse gas concentrations continue rising globally, by the middle of this century our planet will be warmer. This could have a damaging effect on ecosystems, biodiversity, and the frequency and severity of extreme weather events. Additionally, sea levels will rise.

Many cities in the Middle East risk becoming too hot to live in. 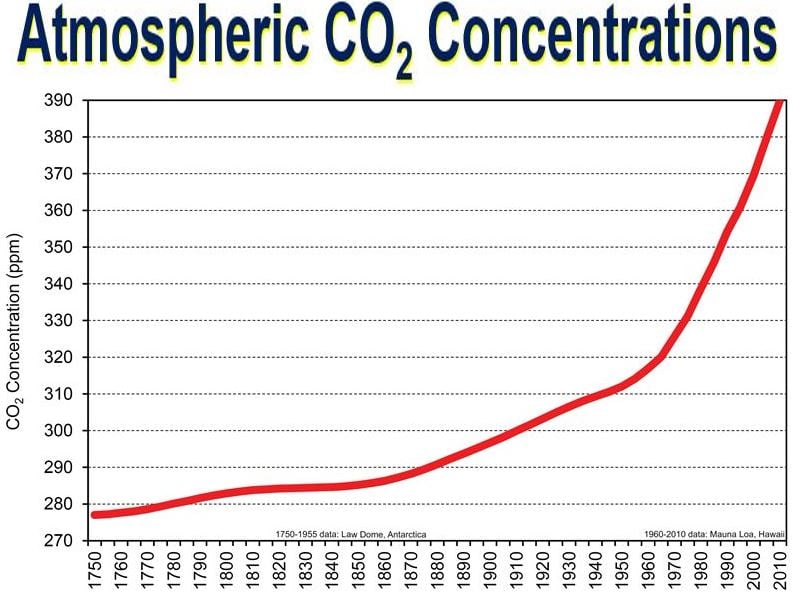 Impacts on the overall greenhouse effect

The contribution of each greenhouse gas to the greenhouse effect is determined by how powerful it is. How much of it there is, is also a factor.

For example, methane’s direct radiative effect 25 to 80 times stronger than CO2 over a period of twenty years. However, there is much less methane in our atmosphere than CO2.

However, methane also contributes to the formation of Ozone, which is another greenhouse gas.

The contribution of each gas to the overall greenhouse effect is as follows (source – Wikipedia): 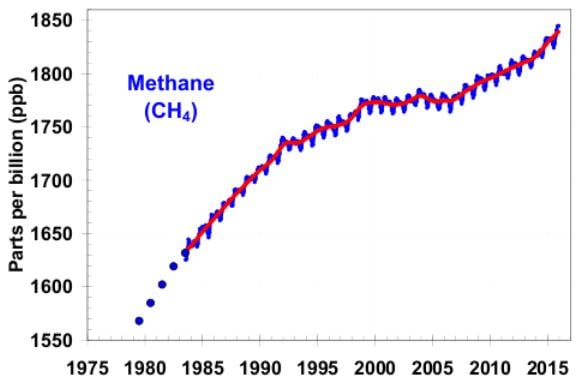 According to the NOAA Earth System Research Laboratory: “The growth rate of methane declined from 1983 until 1999, consistent with an approach to steady-state. Superimposed on this decline is significant interannual variability in growth rates. From 1999 to 2006, the atmospheric CH4 burden was about constant, but since 2007, globally averaged CH4 has been increasing again.” (Image: noaa.gov)

What is a positive feedback loop?

Take water vapor, for example. It is naturally present in the atmosphere and has a strong effect on the climate and weather.

As the Earth gets warmer, more water vapor evaporates from its surface. It then becomes water vapor in the atmosphere.

Some experts say that because of the positive feedback loop and momentum that global warming has gained, there is little we can now do to stop the process. 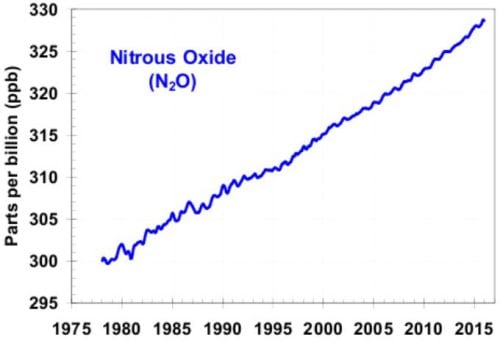 Emissions from the energy sector have declined since 1990 in most of the advanced economies. The decline is mainly due to fuel switching to less carbon-intensive energy sources.

The UK’s second largest source is the agricultural sector, which contributes up to 10% of total emissions. The main gases that come from this sector are methane and nitrous oxide.

Over the past twenty-five years, emissions from agriculture have fallen in the advanced economies. They have dropped because of a decline in livestock numbers and the management of manure. However, they have risen in the emerging economies.

The industrial sector represents up to 5% of the UK’s national total, which emits every type of greenhouse gas.

Greenhouse gases do not simply stay in one place after they have entered the atmosphere. As air moves across the world, greenhouse gases become mixed. Therefore, the concentration of, for example, CO2 is approximately the same everywhere – no matter where you measure it.

You cannot protect your country by simply emitting less. What one country does affects all others. If you take measures but other countries don’t, you will subsequently suffer the effects of their lack of action.

The only way we can effectively tackle global warming is if all nations work together. Greenhouse gases are causing climate change  – it is a global problem that requires a global solution.

When politicians and city planners make decisions regarding the environment, they often factor in a gas’ Global Warming Potential. It is a measure of how much energy one ton of an atmospheric gas absorbs compared to carbon dioxide.

Video – How do greenhouse gases work?

In this video for lay people, you can learn the basics of what greenhouse gases are and what they do.