Scientists have found a way to increase crop yield without plants having to use more energy or resources. It involves modifying the process of photosynthesis so that it does the same job more efficiently.

In field trials with tobacco plants, those with modified photosynthesis produced around 40 percent more biomass than unmodified ones. They also grew faster. 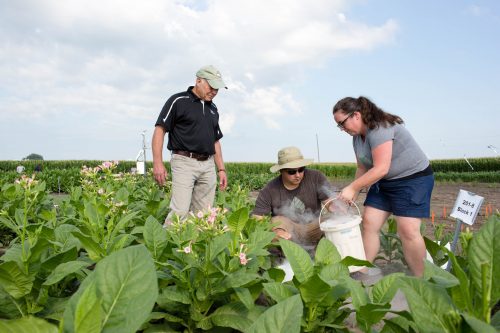 The team at the University of Illinois at Urbana in the United States chose tobacco because it is an ideal model for this type of plant research.

Unlike many food crops, say the researchers, tobacco is easy to transform and test. It also produces huge amounts of seed and has a short life cycle.

But, where it matters, such as in the study of photosynthesis, tobacco is similar to food crops in that it produces a “robust” leaf canopy.

A scientific paper on the study featured recently in the journal Science.

“We could feed up to 200 million additional people,” says senior study author Donald R. Ort, who is a professor of plant science and crop science at the university, “with the calories lost to photorespiration in the Midwestern U.S. each year.”

The study is part of a project called Realizing Increased Photosynthetic Efficiency (RIPE). The project’s aim is to increase sustainable global food productivity by engineering staple food crops that use sunlight more efficiently to increase yield.

The next stage of the project will be to apply the tobacco findings to food plants such as aubergine (eggplant), tomato, rice, potato, black-eye pea (cowpea), and soya.

Photosynthesis is a chemical process in plants that converts sunlight, water, and carbon dioxide into the sugars that fuel their growth. The process releases oxygen into the air as a byproduct.

The chemistry works because of an enzyme called ribulose bisphosphate carboxylase/oxygenase (rubisco), which is “the most plentiful single enzyme on the Earth.” The enzyme pulls carbon dioxide into the photosynthesis reaction.

However, because oxygen and carbon dioxide molecules have similar shapes and chemical properties, rubisco sometimes pulls oxygen into the reaction instead. This results in toxic oxygenated products such as glycolate.

Plants get rid of the toxic products through photorespiration. This is a circuitous, costly process that reduces the efficiency of photosynthesis by 20-50 percent in many food crops.

The RIPE investigators looked at this as an engineering problem. Could there be ways to get the same result (remove the toxins) using less energy?

Prof. Ort argues that even reclaiming just a portion of the calories lost to photorespiration could make a huge difference on a global scale.

It would go “a long way,” he explains, “to meeting the 21st Century’s rapidly expanding food demands [which are] driven by population growth and more affluent high-calorie diets.”

Using a “synthetic biology” approach, he and his team engineered several genetic configurations for three alternative photorespiration pathways, or shortcuts.

They “stress-tested” the configurations in 1,700 plants. This whittled down the best performers to around three to five for each pathway.

After further analysis, they tested the three pathways in field trials and then replicated them to confirm the results. This took 2 years.

The team expects that it will take at least 10 years to translate the technology to food crops and then get it through regulatory approval.

The project is particularly relevant in the context of global warming, as study co-author and postdoctoral researcher Amanda P. Cavanagh explains:

“Rubisco has even more trouble picking out carbon dioxide from oxygen as it gets hotter, causing more photorespiration.”

The project sponsors are the Foundation for Food and Agriculture Research in the U.S., the Bill and Melinda Gates Foundation, and the United Kingdom government’s Department for International Development.

The intention is to give smallholders and small farmers – especially those in Sub-Saharan Africa and Southeast Asia – royalty-free access to all of RIPE’s achievements.

“Our goal,” says Dr. Cavanagh, “is to build better plants that can take the heat today and in the future, to help equip farmers with the technology they need to feed the world.”