Soil minerals have the potential to hold large amounts of carbon drawn from the atmosphere. But could the mechanism help to tackle the challenges of climate change?

Two soil scientists in the United States – Oliver A. Chadwick of the University of California, Santa Barbara and Marc G. Kramer of Washington State University – recently completed a study of the subject. 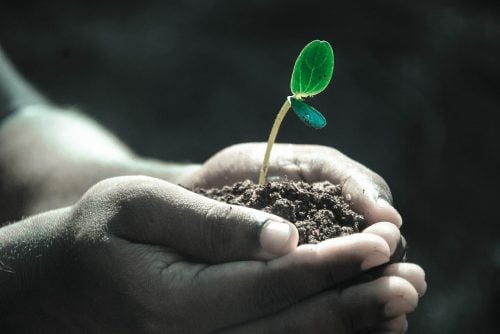 Plants pull carbon out of the atmosphere in the form of carbon dioxide during photosynthesis. Image: pixabay-1838658

“We’ve known for quite a long time,” says Chadwick, “that the carbon stored on minerals is the carbon that sticks around for a long time.”

However, what has been less clear, is how carbon storage by soil minerals varies across different climate zones.

Without this understanding it is difficult to assess the extent to which the mechanism contributes to the “global soil carbon pool.”

To this end, the two scientists carried out an evaluation of carbon storage by soil minerals on a global scale.

They believe that their study, which now features in the journal Nature Climate Change, is the first to accomplish such an exercise.

How does carbon get into soil minerals?

Plants play a key role in carbon storage by soil minerals. They pull carbon out of the atmosphere in the form of carbon dioxide during photosynthesis.

Photosynthesis is how plants make sugars for food, energy, and growth by combining carbon dioxide and water with the help of sunlight.

When plants die, soil bacteria decompose their organic remains and release the carbon in them. This carbon either goes back into the atmosphere in the form of carbon dioxide, or it becomes trapped on the surfaces of soil minerals.

For their analysis, Chadwick and Kramer used soil profiles from the National Ecological Observatory Network and from another archive of globally representative profiles.

Water appears to be a crucial factor in the ability of soil minerals to store carbon.

The scientists found that where the climate is wetter, soil minerals retain more carbon.

Planet Earth has around 600 billion metric tons of carbon stored in the soil. Much of this is held in tropical zones and wet forests.

Soil minerals in land masses with arid climates, on the other hand, are more likely to have a “negative water balance.” This makes them much less able to retain organic carbon.

“Carbon retained by reactive minerals was found to contribute between 3 and 72 percent of organic carbon found in mineral soil, depending on mean annual precipitation and potential evapotranspiration,” note the authors.

Chadwick suggests that even a small change in the world’s water balance could increase carbon storage by soil minerals.

However, this would not an easy thing to do, he explains, especially in places like deserts, where there is little water to begin with.

“So,” he cautions, “it doesn’t actually make any sense to spread a lot of water out over the landscape because water is hugely valuable.”

He and Kramer also considered the possible effects of climate change on carbon storage by soil minerals.

As the Earth’s temperature rises, it increases microbial activity in the soil. This could drive carbon release into the atmosphere at a faster rate than its capture by photosynthesis.

In addition, higher temperatures mean more evaporation, which would reduce the water available to help soils dissolve and retain carbon.

Chadwick and Kramer note that there is still a lot of research to do in this area. Scientists need to find out more about this relatively unexplored carbon storage mechanism before they can start to suggest ways to use it in a climate change context.

Among the many questions that need answers are how long do the minerals hold onto the carbon.

“Is it going to stay there long enough to matter?” asks Chadwick.

“We know less,” says Kramer, “about the soils on Earth than we do about the surface of Mars.”

“Before we can start thinking about storing carbon in the ground, we need to actually understand how it gets there and how likely it is to stick around,” he concludes.