The UK economy grew 0.3% in May after declining 0.4% in April, according to the Office for National Statistics (ONS).

All sectors in the economy expanded. Month-on-month growth in construction was 0.6%, while production grew by 1.4%  after a 2.9% decline in April. Within production, manufacturing grew by 1.4%. 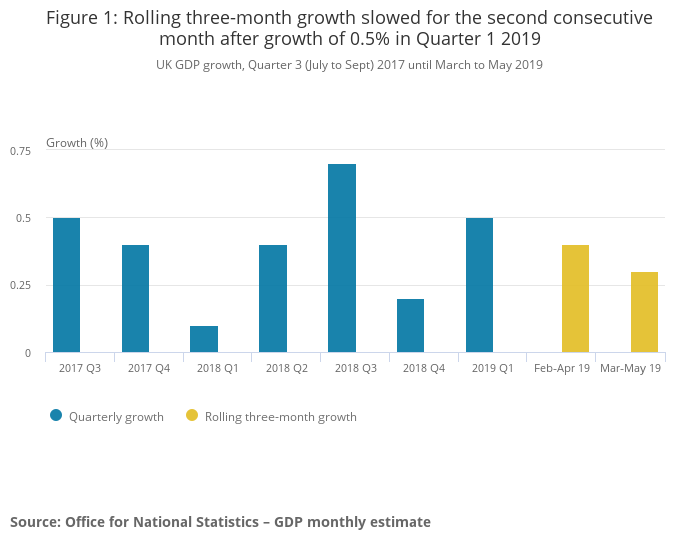 Overall, the economy performed better in May than what many economists had forecast.

UK GDP growth has slowed over the past few months amid weak global growth and heightened Brexit uncertainty.

“GDP grew moderately in the latest three months, with IT, communications and retail showing strength. Despite this, there has been a longer-term slowdown in the often-dominant services sector since summer 2018.

“The economy returned to growth in the month of May, following the fall seen in April. This was mainly due to the partial recovery in car production.”

Ben Brettell, senior economist at Hargreaves Lansdown, was quoted by Sky News as saying that “storm clouds look to be gathering over the UK economy as consumers and business remain hamstrung by Brexit uncertainty.”

“The Bank of England has forecast zero growth for the second quarter (April to June). More worryingly, PMI data releases last week covering the manufacturing, construction and services sectors suggested the economy could actually have shrunk in Q2,” Brettell added.

“But today’s growth figures from the ONS suggest the economy probably grew overall in the quarter, though probably at a much slower rate than the 0.5% recorded in Q1. “The Q2 figure is due to be released on 9 August.”