Why Are Icelanders So Strong? 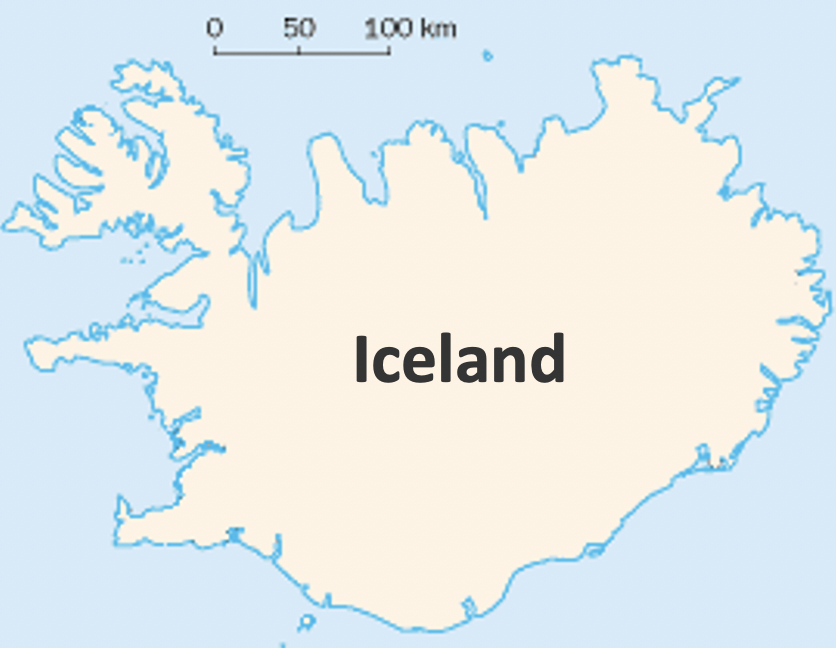 Why Are Icelanders So Strong?

You have seen them crushing it big on international strength competitions; flipping cars and tires, winning championships, breaking and setting world records.

But have you ever thought for a second who Icelanders are and how do they make such daunting feats look so easy?

It’s easy to think this is just a passion for a few people or just several talented folks taking their nation to the world. After all, it seems as though different countries are good at different sports when it comes to world competitions.

That’s true, but the thing with Icelanders and their strength goes deeper than that. In this post, I will be taking y’all to the core of this tradition of Greek-god strength, where it all started, and whether the future looks bright for the heavy lifters of Iceland.

Iceland; the country, the people

Up North, on a small, black volcanic rock 103,000 square kilometers lives a people almost 369 thousand strong. Deceptive as the numbers might be; this is the Republic of Iceland.

The nation has been in the making for hundreds, if not thousands of years, and so have her people.

Throughout their centuries-long history, perseverance, physical strength, and the fight for survival have always been a vital part of Icelanders, a second nature engraved in the better part of the population.

And rightfully so, as the small Nordic island nation is a land of extremes. The climate is brutal here, with punishing winters lasting for months on end.

The landscape doesn’t help either. Its volcanoes, lava fields, geysers, and hot springs are nothing short of picturesque, but this seemingly perfect land is a far cry from your fantasy romantic destination {although it could be for those who come and go.}

For the nationals, however, it’s a whole different story altogether. It’s a brutal land where it’s virtually impossible to grow enough produce to go around. So, yeah, everyone has to pull their weight for survival.

But everywhere across the globe, people have to strife just as much to survive…how is Iceland special?

Giants of Iceland; the folklore, myths, and legends 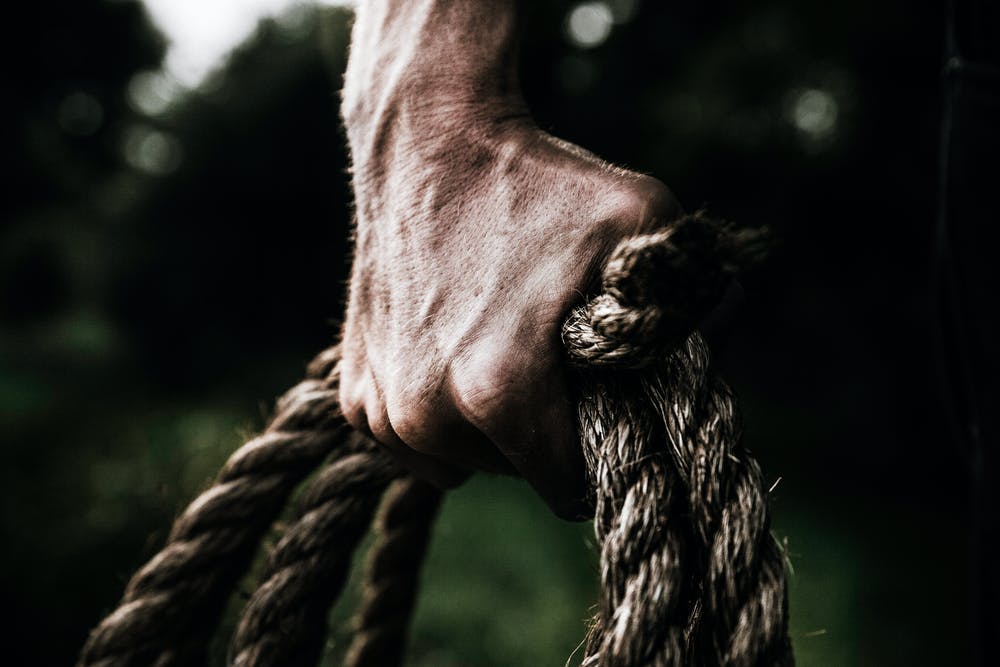 The belief and glorification of sheer strengthby most Icelanders didn’t start in the 16thcentury; it goes further, further back. So much so, that it’s more a matter of myth and legend than recorded history.

We know today that there are many extremely strong and fierce Iceland competitors but the most historical conic figures that have been at the core of Icelanders’ sense of strength and power are the Old Norse gods, Thor and Tyr being among the most popular, and relevant ones.

Defined as the god of thunder, wrestling, and fertility, Tor wasripped, strong,   and formidable. The same goes for Tyr, although the latter is believed to have used mostly brains, while Tor was all out for brute force, with the use of his hammer.

The Vikings stuck to this line of thought and pursued this fantasy and mythology; achieving some awesome feats that came to be renowned in history.

Their exploits were not to last forever though, conversion to Christianity came, and with it a new theology. But while the theology changed, the reverence on power and strength didn’t.

Why are Scandinavians so strong? 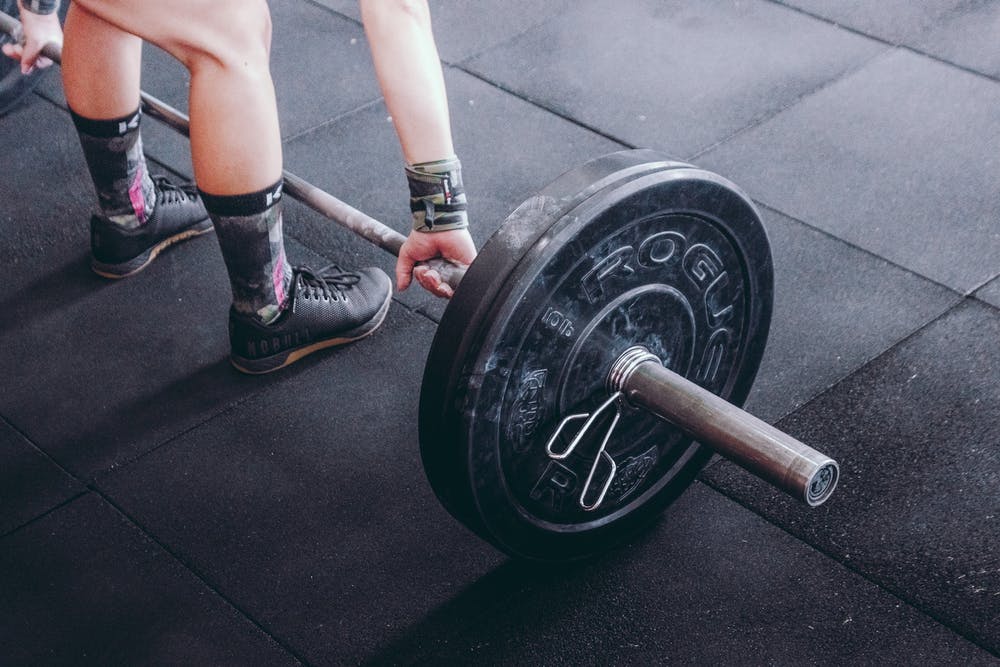 This partly has something to do with the diet, but I’ll get to that in a bit. Now, as much as the diet counts, the feats that the people on this island have to pull off every day are also a reason why they grow continually strong.

Back in the 20th century when the women have to haul loads of laundry a punishing five kilometers to a hot spring and then haul the heavier wet laundry back home. Now, that’s no mean feat.

The men didn’t have it any easier either. They too had to earn their keep in society by carrying on grueling work. From moving rocks, and I mean heavy ones, for long distances for construction to wrestling with heavy nets when fishing, it took brawns to make it through each day.

With such a strenuous life, it’s no surprise that individuals would grow strong and pass those genes over to their subsequent generations.

It would be fair to say these are a people carved into who they have become by decades and centuries of a life that depended on brute force, strength, and endurance.

Why are Icelanders so big?

Strength isn’t the only distinguishing aspect about the Icelanders; they are just as outstanding when it comes to size.

Perhaps this explains their overwhelming strength.

On the bottomline, however, it’s clear that strength and size are two features that set the people from this country apart.

It has been suggested that when it comes to big guys, Iceland is only second to the US worldwide, and tops the list in the European countries.

This is a big deal considering the size of the country’s population.

How can a small isolated island have such big, strong people? There seems to be only one explanation; two factors are at play here….the diet and genetics.

Lifting, moving, exercising, and arduous work aside, what you eat can make a world of difference in the size of one’s body, and even possibly reflect on the strength as well.

Thanks to the harsh climatic conditions and the rough landscape, growing crops in Iceland is challenging enough. Out of necessity, and with a bit of ingenuity, Icelanders figured out how to melt cod liver and use it as oil.

They also learned to make useof milk for food preservation, especially for fatty foods. With no land for growing plants, vegetables, fruits, and even wheat would be hard to come by, more so for a large percent of the population.

Overall, the most staple food on the island was (in the not so distant past) highly protein-based, and with high levels of fat.

To break this down a tad, as I already mentioned, Icelanders were good at fishing, in large quantities. Combine this with the rearing of animals like sheep, on an island where crop growing just isn’t practical, and you are left with meat, dairy, and fish diet to go on.

This has its benefits;

Genetics hasa way of honing people into a certain character. Now, I don’t have to go into details about DNA and all the science involves. But it’s easy to tell why Icelanders can grow so big.

As I have mentioned above, diet is one big factor and one that has been at play for a long time.

Looking back at the Vikings, it won’t make much sense to say modern-day Icelanders are so big for simply being their descendants. In fact, in their hay days some 1,200 years ago, Vikings were about five feet six on average.

That would be considered short by today’s standards. But consider this, as resources become scarce, and survival becomes a necessity by the day, humans have continually grown taller.

And none more so than the males (Icelanders included), with the bigger body size being an advantage for finding a mate, and thus passing their genes to the next generation.

Forget the situationaround the globe and zoom in on today’s Icelandic men, who rank high on world standards, at around 5’11” for the average man. This puts the Icelanders about 2 inches taller than your average American.

Now, the larger frame can carry more muscle, giving the individual more strength, which is apparent among a fair number of Icelanders.

Does Iceland have the strongest people?

That depends on how you look at it.

Iceland has produced some strong of the strongest men who ever lived, and some who are still alive.

But when you decide to face the facts and look at the population across the board, then it becomes hard to rank the nation up there.

The thing is, while a population might have a few strong men, and a fair share of big guys, that doesn’t automatically mean the country has the strongest people.

To draw the line here, it would be safe to say Iceland has some of the strongest people, but not particularly the strongest of all. 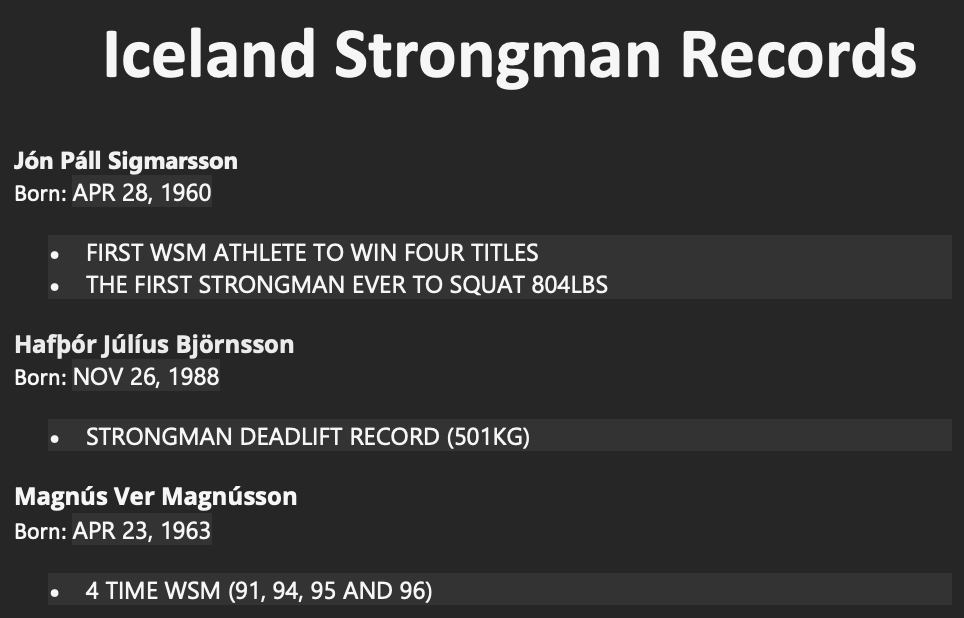 Concrete, steel, and sweat…Icelanders have had some of the most committed strongmen focused on pushing their bodies past the limit.

And yeah, these efforts have paid off time and again, with the likes of Jón PállSigmarsson winning international strongman competitions almost 10 times. Then the icons just kept coming.

Here’s a sneak peek into some of the outstanding strongman achievements in the world competitions by Iceland best of the best.

Icelanders’ performance in strength competitions speaks for itself. However, one thing is for sure, it just doesn’t happen.

Those who hit the gym do work up a sweat. And they take strongman workouts to a whole new level with custom-made, outright insane training equipment.

That isn’t to say Icelanders don’t use the standard equipment used in gyms across the globe. They still crunch it hard on treadmills,bikes, rowing machines, and even barbells as well as other strength training equipment.

But I’m sure they are using heavy duty exercise equipment, not the normal ones you and I use; like imagine an Icelander strongman using a compact rower to do his exercises, it would break immediately.

If they are to get any longevity out of their strength training equipment or keep from breaking other’s gym equipment, they need to stay away from anything other than heavy duty models designed for high weight capacities and built to withstand the pressure and abuse of these ridiculously strong humans.

The good thing about the training culture is that it starts right from a young age, with obstacle courses and other strength workouts that set men and women on a fast track to fitness right from the start.

Speaking of which, Iceland isn’t short of women who are ready to rip iron as well. And this has been portrayed in world CrossFit champions like Katrina Tanja, as well as Annie Mist, who have titles in this competition.

Others like Ragnheiður Sara Sigmundardóttir and SóleyJónsdóttir have also displayed their physical prowess and incredible strength in weightlifting and powerlifting competitions.