The noun ‘work‘ has several different meanings. It can mean an activity that involves physical or mental effort in order to get a result, the workplace, employment (a job), one’s working hours, a task or tasks that need to be undertaken, cosmetic surgery, a painting or sculpture, materials (notes, documents, etc.) that people use in their jobs, or a musical composition.

As a verb, it can mean to be engaged in a mental or physical activity in order to get a result, to toil, to be employed, to function properly (to be operational), to produce the desired result, and to persuade.

The plural of the noun – works – can mean everything a writer or musician wrote or composed (the complete works of Shakespeare), a factory, deeds carried out by a virtuous person (works of charity), a syringe (slang), and the proper functioning of something (spanner in the works).

Etymology is the study of where words come from (their origin) and how their meanings evolved over time. An etymologist specializes in the origins of words.

According to etymonline.com, in Old English, the words Weorc and Worc meant “something done, action, proceeding, business, that which is made or manufactured, products of labor, physical labor, oil, skilled trade, craft, occupation, and military fortification. It came from Proto-Germanic Werkan.

The use of the expression To be out of work, meaning jobless, appeared in the 1590s. The term Work of art dates back to 1774. The expression Work ethic has only been around since 1959. 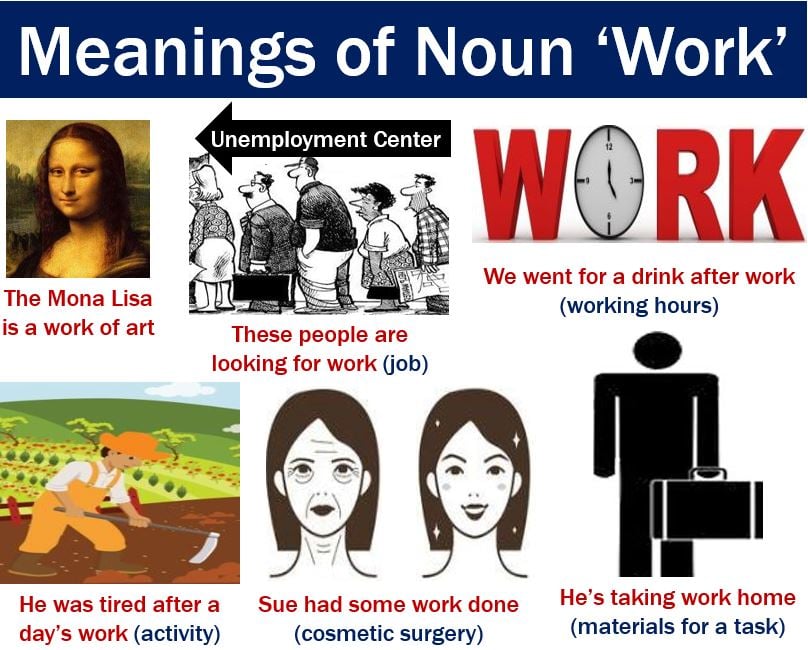 As you can see in this image, the noun ‘work’ can mean activity, cosmetic surgery, materials for a task (office papers), job(s), a painting, and working hours.

A phrasal verb is a verb plus an adverb, preposition, or both. When the main verb and preposition/adverb come together, there is a new meaning.

For example: ‘To look‘ means ‘to see’, but to ‘look down on somebody’ means to feel superior to them. The phrasal verb in this case is ‘Look down on‘.

There are literally dozens of phrasal verbs with ‘work’. Below are some of the most common ones:

– To Work Out: can mean to exercise in the gym, as in “When I was young, I worked out five times a week at my local gym.” If I say “The plan worked out” it means that it was successful.

“John and Mary worked out their problem,” means they resolved their problem. This phrasal verb is also used when talking about calculating the answer to a math, physics, or mechanical problem, as in “I worked out the sums you gave me for homework in about twenty minutes.”

– Work Up (To): when somebody gets worked up it means they become stressed or upset, as in “I should not have shouted at him; I got worked up after listening to all the criticism.”

When somebody says “I did some exercise and worked up an appetite,” or “I worked up the courage to tell her,” they are talking about building up something or evoking an emotional or physical state.

Before competing in the marathon last year, I started training lightly, and ran just one mile four times a week at first, and then two miles, and gradually worked up over a period of six months to the full 26 mile (42 km) distance. In this sense, the phrasal verb means to arrive at something by gradual progression. 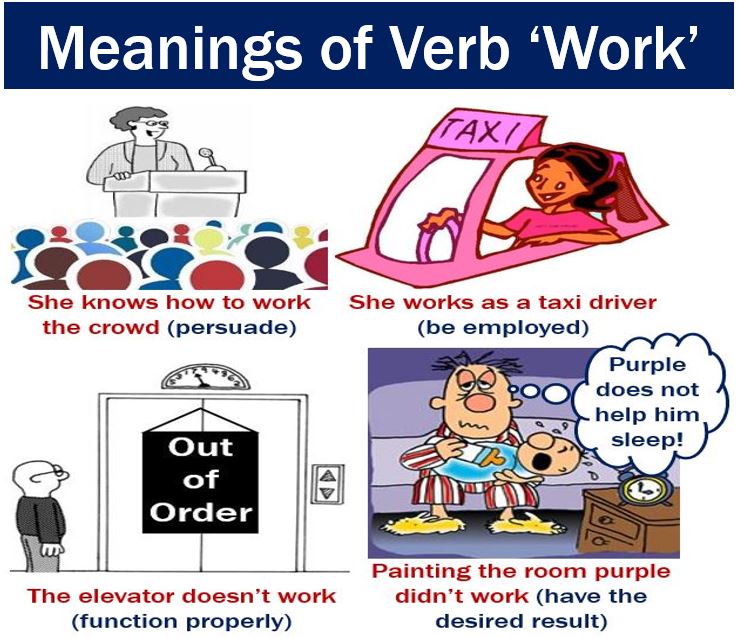 The word ‘work’ as a verb can mean to persuade, to be employed, to have the desired result, or to function properly. As a phrasal verb, there are dozens of possible meanings.

Work On: means to practice, as in “Your singing was good, however, you need to work on the lower notes.” This phrasal verb may also mean to try to persuade somebody to do something you want, as in “I worked on my Dad to get me a motorbike for Xmas, but he gave me a collection of books.”

– To Work Around: to resolve a problem by circumventing it; not dealing with it because you find your way around it, or you found a substitute, as in “I did not have any sugar when making the desert, but I worked around it by using honey.”

– To Work Through: to push on until a problem is solved – to gradually overcome an obstacle, as in “In our third year of marriage we had some serious problems, but we worked through them, fortunately.” Sometimes this phrasal verb implies a certain amount of cooperation by both parties.

– To Work Off: to burn calories consumed, as in “I worked off the calories in the Mars bar I ate by running 2 miles.” It can also mean to pay off a debt by doing something rather than paying with money, as in “I had no money to pay for my meal, so I worked it off by waiting at tables and washing dishes for two hours.”

– To Work In: to include something in, for example, a routine, as in “In my busy schedule, I manage to work in four sessions at the gym each week.”

– To Work Over: to inflict injury as in “John is in hospital. He was worked over by a bunch of thugs on his way home from work.” It can also mean to defeat an opponent convincingly as in “Manchester United did not expect to be so badly worked over by Chelsea in the cup final.”

In this TED video, behavioral economist Dan Ariely presents two interesting and eye-opening experiments that reveal our surprising and nuanced attitudes toward the meaning of work.