Its working paper – ‘The Economic Costs and Benefits of Securing Community Forest Tenure: Evidence from Brazil and Guatemala’ – found that one of the greatest impacts is in global benefits realized through significantly avoided CO2 emissions from tree felling (deforestation).

In just the two areas studied – Guatemala and Brazil – secure rights to community forests are forecast to prevent the release of more than 5.4 billion tons of CO2 over two decades. This is equivalent to over one billion cars in one year. 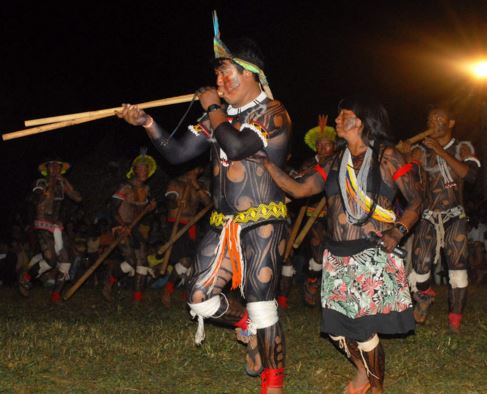 The Yudja – one of several indigenous groups who call the Brazilian Amazon home.

“Secure rights in community forests of Brazil and Guatemala are a positive investment for both countries, which carries important implications for many other countries.”

The Indigenous Territories in the Brazilian Amazon cover 13% of the country. The authors calculated that the benefits from carbon capture and averted emissions resulting from community forest rights amount to $161.7 billion over twenty years.

“The global implications are huge. Indigenous Peoples and communities have some legal rights to about one-eighth of the world’s forests although they actually hold and use much more under customary arrangements.”

“When we invest in strengthening their rights, we now know we are not only doing the right thing, we are also making a smart investment in a more climate-stable world.” 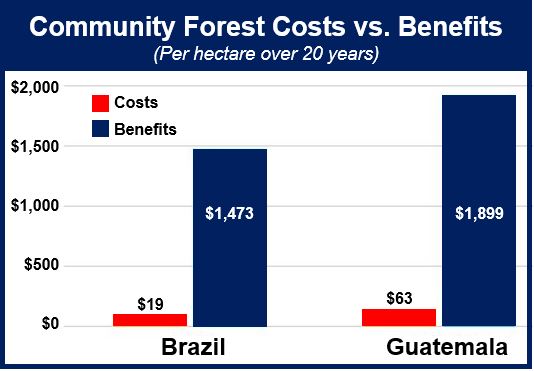 According to previous WRI research, community forest rights that are legally protected and recognized by governments frequently translate into healthy forests with high forest carbon storage, and less deforestation.

However, achieving secure rights requires investments to ensure legal protections and their implementation, as well as to improve local people’s capacity to sustainably manage and benefit from forest resources.

In this latest analysis, the researchers calculated that the estimated annual costs per hectare of securing community forest tenure are relatively low, when taking into account the reductions in carbon emissions and avoided deforestation.

In Brazil, for example, investing $19 per hectare today would yield the equivalent of $1,473 in benefits over a period of twenty years. That’s a benefit of $77.5 for every $1 spent.

Over the same period, $63 invested today would yield $1,899 in benefits. The Guatemalan estimate includes the economic benefits to communities through sustainably harvesting and marketing forest products.

The authors believe that the development of such methods will eventually demonstrate even greater net benefits of secure rights to community forests.

“This paper sheds important new light on the multiple benefits of securing land rights. However, it’s clear that further research is needed to more fully understand the economic benefits. We expect that as we expand our understanding of this issue, decision makers will take more actions to strengthen community land rights.”

Video – What is Climate Change?

Climate change is all about the long-term change in our planet’s average temperature and weather patterns. The term is similar to global warming, but not the same.