An Annual General Meeting, or AGM, is a gathering of a company’s interested shareholders.

At the AGM, which is usually mandatory, the company’s directors present an annual report. The report informs the stockholders (shareholders) about the company’s profits or losses.

At the AGM, senior management also tells shareholders how well or badly the company performed, why, and what its strategy is. Rather than Annual General Meeting, some people simply say General Meeting.

In this article, ‘senior management’ means the same as ‘directors’.

During the AGM, shareholders will expect the directors to answer their questions. Even though AGM attendees look respectable and civilized, these events can become quite heated. In fact, in some AGMs of famous multinationals, shareholders have become violent.

While many AGMs are large, others are quite small affairs with no more than four or five people. 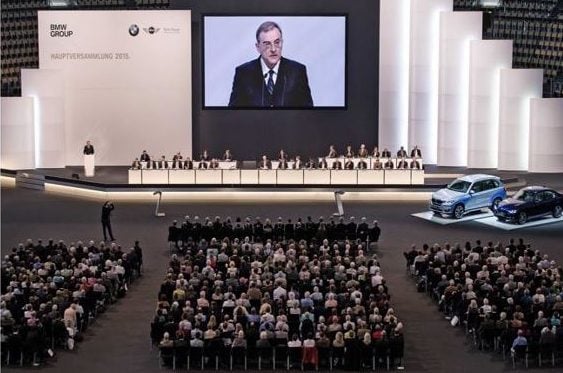 Dr. Norbert Reithofer, Chairman of the Board of BMW AG, speaking at its 95th Annual General Meeting in 2015. (Image: press.bmwgroup.com)

Shareholders will vote on any issues that the directors present or discuss at the AGM. Issues may cover the appointment of a new person to the Board of Directors, the removal of a director, dividend payments, the selection of auditors, and **executive compensation.

** Executive compensation refers to how much money the company pays senior management. In fact, since the 2007/8 global financial crisis, shareholders have become increasingly rebellious regarding executive pay.

AGMs do not only take place in companies, but also in schools, universities, charities, unions, and other organizations.

The President or Chairman presides over or chairs the meeting and may give an overall status of the organization.

The minutes – what people said – are prepared by the Secretary. The Secretary may also have to read important papers.

The Treasurer, Financial Director, or Chief Accountant may present a financial report. Shareholders will also expect other board members to present their reports too.

Public companies in the United States

Every US state requires public companies incorporated within it to hold an AGM of shareholders to vote for the members of the Board. The states also dictate that AGMs should cover any other business that requires stockholder approval.

The Board must inform all shareholders and senior management about the AGM’s venue and date in advance. States have different minimum notice period requirements. People who will attend the Annual General Meeting receive a written notice.

The SEC voted in 2007 that all public companies should make their AGM materials available online. SEC stands for the US Securities and Exchange Commission.

AGMs in the United Kingdom

As from 1st October 2007, it became optional in the UK for any private company to hold an AGM. AGMs are mandatory only if the company’s Articles of Association specify this.

** You can buy and sell the shares of a public company on the stock market.

The Companies Act 2006 does not specify what AGM members must talk about or do during the meeting.

Who can attend an AGM?

However, the members of a charity, voluntary organization or public company limited by guarantee may not necessarily be its owners.

Proxy: sometimes it might not be possible or practical for a shareholder to attend an AGM. Maybe the shareholder is busy, or the Annual General Meeting is too far away. Shareholders may vote by proxy – a substitute. If you authorize somebody of your choosing to vote on your behalf, that person is voting by proxy.

The term AGM should not be confused with EGM – Extraordinary General Meeting. Shareholders of a company, employees of an official body, or members of an organization, hold an EGM at an irregular time.

An EGM is held when an issue arises that requires the input of the entire membership. Furthermore, this issue is too urgent or serious to wait until the next Annual General Meeting.

The company must tell shareholders what the purpose of the EGM is so that they can prepare for it.

According to the Cambridge Dictionary, an Annual General Meeting is:

“A meeting that happens once every year in which a company or other organization discusses the past year’s activities and elects new officers.”

AGMs can be very boring and dull events. A small company’s AGM may be held at its lawyer’s Board room and is attended by just a handful of people. In fact, in many cases, the majority of the voting is by proxy.

The AGMs of larger businesses, however, are often quite colorful, entertaining, or even violent. Mike Volker, at Simon Frazer University in Canada, gives some real-life examples.

At one of MacMillan Bloedel’s AGMs, a protestor shouted:

“We will light the world on fire the moment you try to blast a road into those valleys. It will be ugly. I promise you that!”

You may now wonder whether the AGMs of ‘public companies’ are open to the public. The answer is ‘No’. AGMs are for members only, which in the case of a company are its shareholders.

However, members of the general public and certain pressure groups will try to crash AGMs – sometimes successfully. Individuals or organizations claiming to be corporate watchdogs attend AGMs. According to these watchdogs, they are serving the public interest.

AGM attendees, just like wedding reception guests, love complaining about how the company organized the event. Criticisms regarding the food are very common.

At a Canadian Tire AGM, one stockholder complained that the bagels he was given were stale. Stephen Bachand, the company CEO, responded: “Why don’t we hold the meeting at a deli?”

A fight broke out among Daimler shareholders at its AGM this year in Germany. A dispute rapidly turned ugly, and the company had to call the police. Local media said that this was a pity because the luxury carmaker was declaring its highest dividend ever.

Daimler served about 12,500 sausages to its 5,500 shareholders at the meeting for lunch. Additionally, there were thousands of bread rolls, wraps, potato soup, and potato salad.

A man repeatedly went to the buffet and started wrapping up several sausages to take home with him. A female shareholder was not impressed and told him off. The altercation turned into a vicious shouting match, and the police were called.

Buffet lunches are a common sight at German AGMs, which tend to go on for a very long time. Some German AGMs continue well into the night. Daimler’s last AGM was the shortest anybody could remember – it lasted from 10 a.m. to 4.15 p.m.