An autarky is a country that is completely self-sufficient. Not only does it not need to import, but it also exists without external aid. An autarky would manage fine if it were completely isolated. A trade embargo or natural phenomenon that cut it off from the rest of the world would not affect an Autarky’s ability to survive.

An autarky is a closed economy. It is an isolationist nation. The term may refer to either a country or the system itself.

The term refers either to the state of self-sufficiency or an entity that is completely self-reliant.

Whether or not a country is an autarky may be the result of either deliberate policy or good luck. A nation with lots of land, raw materials, and the right climate to feed itself is lucky.

However, some countries become autarkies deliberately. Their governments shun contact and trade with other nations, and they learn to become self-sufficient.

Canada and Australia, for example, have sophisticated economies, lots of land, and raw materials. Additionally, they can produce enough food to feed their citizens.

Japan and the United Kingdom, however, rely on trade, i.e. imports and exports. Japan needs to import fuel, food, and several raw materials.

Canada and Australia are much closer to being autarkies than the United Kingdom and Japan. In other words, Canada or Australia would survive in total isolation better than the UK or Japan would. 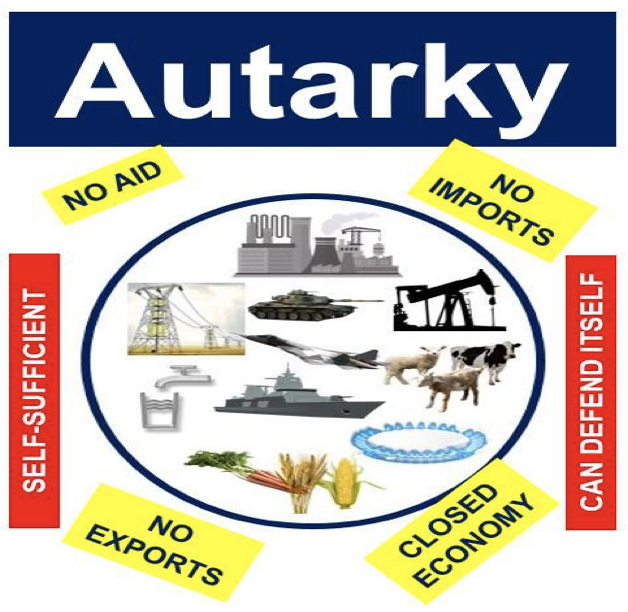 Autarky is a utopia that does not exist, economists say.

Autarky not limited to economics

The term does not always refer to an economic state. A military autarky, for example, is a country that can defend itself without outside help. That nation can also make all the weapons it needs without relying on imports.

For example, most countries aim for autarky concerning food production. We all agree that it is more desirable for a country to be able to feed itself.

No country wants to rely on foreign powers for its energy, food, or water. We call those parts of the economy that are vital for a nation’s survival its strategic industries.

According to ft.com/lexicon, autarky by definition is:

“An ideal state of economic self-sufficiency based on an abundance of raw materials, food and other essentials.” John William Snow, born in Toledo, Ohio, was once CEO of CSX Corporation. He served as US Secretary of the Treasury under President George W. Bush from 2003 to 2006. (Image: Wikipedia)

During the Edo Period, before its opening to the West in the 1850s, Japan was partially an autarky. The term Sakoku (鎖国) refers to that period of isolationism.

In the 17th and 18th centuries, mercantilism was a policy that the great empires of Western Europe pursued. They limited or banned trade outside their empires. 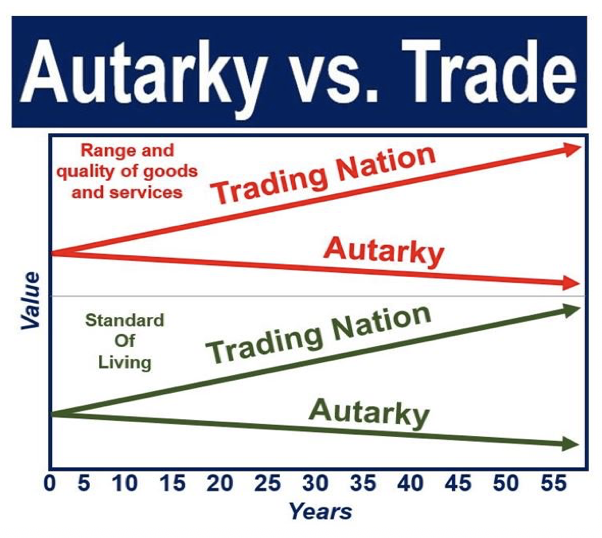 Autarky is bad for economic growth.

In 1808, US President Thomas Jefferson declared a self-imposed embargo on international shipping. The embargo lasted until 1809.

America was emerging from the Revolution. The government was wary of the Britain’s military and economic might.

Nazi Germany had a goal of total self-sufficiency in the 1930s. Hitler’s government encouraged trade inside its economic bloc. The Nazi’s wanted to cut trade relations with the world powers, including the UK, the USA, France, and Russia.

Nazi Germany encouraged international trade only with countries it saw as economically weak. The Nazis saw Eastern Europe, the Balkans, and South America as weak, so they traded with those regions. They also needed to import essential raw materials.

India pursued near-autarky in 1950 after its independence. That policy ended in 1991 after a high number of bankruptcies. In 1976, the People’s Republic of Albania became a quasi-autarky. Enver Hoxha, Albania’s Communist Party leader, instituted a policy of self-reliance.

Spain’s dictator Francisco Franco turned his country into a near-autarky in 1939. In 1959, he opened up the country to international trade.

The resumption of trade coincided with the Spanish Miracle. The Miracle refers to a two-decade period of spectacular economic growth.

Ne Win, who ruled the Union of Burma from 1962 to 1988, pursued the Burmese Way to Socialism. Win’s policy was one of autarky.

In the 1980s, Romania’s dictator Nicolae Ceaușescu proposed paying off the country’s entire foreign debt. In the same year, he also said he wanted to boost domestic production.

Ceaușescu wanted to reduce dependency on imports because his relationship other countries was deteriorating.

Pure autarkies do not exist today. North Korea, whose government ideology is based on Juche (Chosŏn’gŭl: 주체; Hancha: 主體 – self-sufficiency), is a possible example of a country trying for total autarky.

However, without aid from other countries, North Korea’s population would starve. The country also trades extensively with mainland China, Iran, Vietnam, Syria, and some other nations.