The black economy, underground economy, or shadow economy involves business dealings that are untraceable and therefore not taxable. We can also call it the hidden economy. Black economy dealings do not form part of a country’s official GDP (gross domestic product).

Newspapers today often use the term the informal sector. It means the same as the black economy.

The black economy exists in a system where the players use mainly or exclusively cash. The participants either keep no transaction records or register them in secret account books. In fact, when those accounts do exist, we call them ‘number two’ accounts.

Even though the informal sector represents a large portion of incomes in developing nations, people commonly stigmatize it. Apart from describing it as unmanageable, politicians also view it as troublesome.

The Economist makes the following comment regarding the black economy:

“If you pay your cleaner or builder in cash, or for some reason neglect to tell the taxman that you were paid for a service rendered, you participate in the black or underground economy.”

“Such transactions do not normally show up in the figures for GDP. So, the black economy may mean that a country is much richer than the official data suggest.” 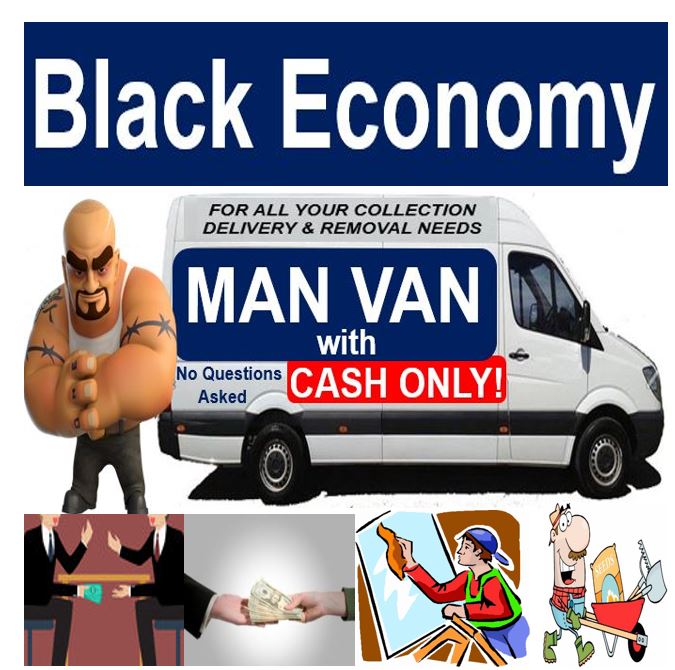 In the black economy, cash is king. Not only do the participants not declare their income, but they pay no taxes either. It is a shadow economy.

Black economy larger than in the 1960s

Over the past fifty years, the black economy has been expanding. Integrating the underground economy into the formal sector is extremely difficult in the developing countries. However, it is a policy that most governments are pursuing.

In repressive regimes, such as Cuba, North Korea, or the old Soviet Union, it is a survival practice for millions of citizens.

In this context, economic activity refers to any activity where people buy, sell, make, or distribute things for money.

During the US prohibition from 1920 to 1933, the black economy was huge. During the Prohibition, the Government banned the sale and consumption of alcoholic drinks.

In the UK, where taxes on cigarettes are extremely high, the tobacco smuggling is big business.

However, that does not mean that all black economy activities are criminal. For example, a boy selling chewing gum in Mexico City’s streets is working in the black economy. We do not, however, describe his activity as criminal.

If I pay a man $100 to do some gardening, is it a black market transaction? If he does not declare that income, then it is. Gardening is not illegal but charging for the work without declaring that income is.

Whether or not you declare an income determines whether it is a black market activity.

There have been several estimates regarding the shadow economy of the United States. While some have included criminal activities, others have not.

Economist Friedrich Schneider, from Johannes Kepler University of Linz, Austria, carried out a comprehensive study. Kepler estimated that the US black economy represented 7.2% of GDP in 2007.

According to Prof. Schneider, from 1999 to 2007 the black economy in the rich countries had been shrinking. However, since the global financial crisis of 2007/8, the trend has reversed.

According to the Federal Reserve Bank of St. Louis, the black economy is very hard to measure. It says there are several direct approaches. For example, surveys, tax audits, as well as other compliance methods can give us an approximate estimate.

There are also some indirect approaches, including examining the discrepancies between national expenditure and income statistics, and discrepancies between the official and actual labor force. Additionally, we can create estimates by monitoring transactions, analyzing currency demand, and tracking electricity consumption.

A Bloomberg article informed that people never reported 18% of US income to the Internal Revenue Service. Some economists had estimated that in 2013 there was $2 trillion of undeclared income. This gave rise to an annual tax gap of between $450 billion and $500 billion.

According to Inequality.org, in California, between 15% and 17% of the labor force works in the black economy. They generate up to $140 billion annually in economic productivity. Therefore, the state is losing up to $28 billion in taxes.

The Institute of Economic Affairs estimated that the UK black economy in 2012 was worth £150 billion annually. This is a huge figure, but as a proportion of GDP, it is much lower than in most other rich countries.

In 2012, the UK shadow economy was worth 10% of GDP. However, this was less than half of the Spanish, Greek, and Italian levels.

The average for the 35 OECD member nations was 13.4%. OECD stands for Organization for Economic Co-operation and Development. Its aim is to stimulate economic progress and world trade.

The report added that there are two main factors determining the size of the black economy. First, the country’s tax system, and second its benefits system.

Much of the UK’s shadow economy was due to the loss of benefits for low-paid workers as incomes rose. The loss of tax credits was also partly to blame.

Video explanation of the black economy

This video explains what the black economy is in a way that’s easy to understand.