What is a bookkeeper? Definition and examples

A bookkeeper is somebody who records payments and money coming into a company or other entity, i.e., they record financial transactions. Bookkeepers maintain the records of the financial affairs of individuals, companies, and other organizations. We refer to their activity as bookkeeping.

The term is a very rare word in the English language because it has three consecutive double letters: oo-kk-ee.

We can write it as one word or two with a hyphen: book-keeper or bookkeeper. The latter form is more common. However, when you start with one, do not switch to the other version in the same article. If you write book-keeper, i.e., with a hyphen, continue with a hyphen for the rest of the text. As a writer, be consistent. 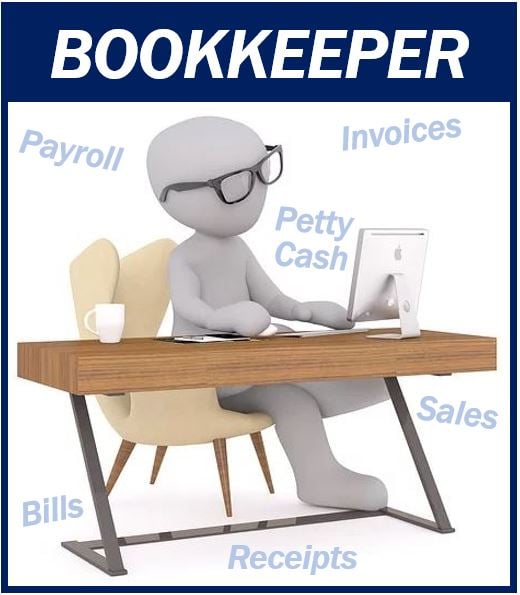 Collins Dictionary has the following definition of the term:

“A bookkeeper is a person whose job is to keep an accurate record of the money that is spent and received by a business or other organization.”

The term first appeared in the English language in the 1550s, according to the Online Etymology Dictionary. Etymology refers to the origin of words and how their meanings evolved over time.

Some people, usually those not involved in bookkeeping or accountancy, use the terms accountant and bookkeeper interchangeably. However, the two words have quite different meanings. Both occupations are important for the proper function of businesses.

Upper management, i.e., the directors of a company, cannot make corporate decisions based solely on the data that bookkeepers provide.

Accountants interpret and classify a company’s financial data. They collect the data and then analyze and report it. They also summarize the data when presenting it to lay people, i.e., those who are not accountants.

The directors of a company are able to make corporate decisions based on the data they receive from an accountant.

In a Market Business News article about bookkeeping, we made the following comment about the two occupations:

“Bookkeepers typically bring the books to trial balance. Accountants, on the other hand, prepare the balance sheet and income statement using the ledgers and trial balance that the bookkeeper prepared.”

A company’s balance sheet tells us about its financial status at the end of a quarter, half-year, or financial year.

Computers have changed how people work

Traditionally, bookkeepers maintained their companies’ books manually. They entered financial data by hand using a pen, pencil, or quill. Today, most of them use bookkeeping or accounting software, i.e., specialized computer programs. Books, in this context, means a company’s accounting records or general ledger.

Some sophisticated accountancy software packages now have AI within their programs. AI stands for Artificial Intelligence, i.e., software technology that makes smart machines like computers or robots think and behave like human beings.

Will AI completely replace human bookkeepers and accountants one day? If so, what will they do? Most experts believe that humans won’t be replaced, but the nature of their work will change. Software programs will take over all mundane and repetitive tasks, while humans will have a more supervisory role.