Capital controls are measures to limit how much capital flows in and out of an economy. In other words, how much money enters and leaves a country.

A country’s government introduces the capital controls. For example, tariffs and volume restrictions are common capital control measures. Governments may also introduce legislation to reduce capital flows. The term ‘capital flows’ refers to the international movement of money for investment.

However, rich countries sometimes impose controls. They may do this either directly or indirectly. Canada, for example, has often been unwilling to let Chinese investors buy its natural resources companies.

Some controls have a minimum-stay requirement. In other words, money that comes in from abroad has to stay in the country for a minimum period. This occurred in Chile at the end of the last century.

For example, foreign currency restrictions make it harder to buy necessary foreign parts. A lack of foreign currency subsequently undermines the availability of products that some domestic producers make.

Capital controls may limit how much money you can take abroad or how much foreign currency you can buy. Governments may also restrict the sale of financial assets to foreign companies. Financial assets are intangible assets such as stocks, bonds, and bank deposits. 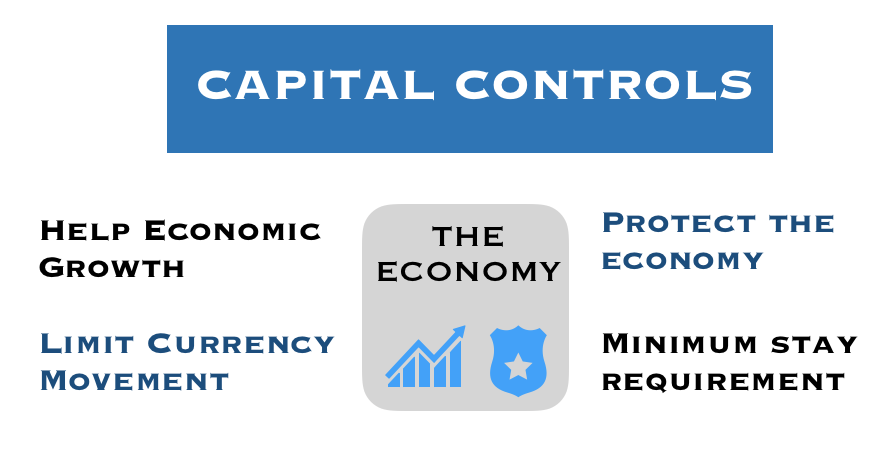 Most leaders of democratic nations are critical of capital controls. Critics argue that controls do more harm than good.

However, their commitment to free market principles often melt away when a financial crisis hits. This occurred during the Latin American debt crisis in the early 1980s and the Russian ruble crisis of 1998/99.

In fact, even the advanced economies introduced capital controls during the global financial crisis of 2007/8.

– Many economists say controls are an excuse to postpone reforms.

BusinessDictionary.com has the following definition of capital controls: