What is a carbon tax? Definition and meaning

A carbon tax is an environmental tax on the emissions of carbon dioxide – a heat-trapping “greenhouse” gas. It is a form of carbon pricing. Carbon tax is levied on the production, distribution or use of fossil fuels based on how much carbon is emitted upon their combustion.

Carbon is found in all hydrocarbon fuels, including coal, petroleum, and natural gas.  When hydrocarbon fuels are burned, carbon and hydrogen atoms react with oxygen in air, releasing heat energy and carbon dioxide.

The amount of carbon dioxide caused by the combustion of a fossil fuel is proportional to the fuel’s carbon content. Because of this, carbon tax is simple to document and measure. In fact, the tax can be levied at any point in the product cycle of the fuel.

The goal of a carbon tax is to reduce greenhouse gas emissions in the atmosphere. The tax makes those who do pollute pay an amount in proportion to their emissions. This can be a powerful incentive for an economy to be more energy-efficient and move to non-carbon fuels. 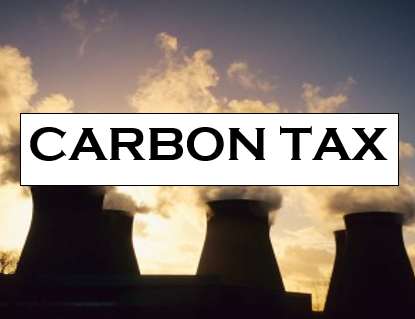 Carbon tax aims to change behavior and guide purchases and investments. The increase in prices for consumers are proportional to the carbon content of a fuel, which sends a price signal to producers and consumers, encouraging them to reduce their consumption and use products generating the least carbon dioxide.

Over twenty countries around the world have introduced a carbon tax as part of their policy against global warming.

Government leaders have made the following comments on their support for carbon pricing:

“Cities that take action on climate change now are building a more resilient, prosperous future for their citizens tomorrow. In Vancouver, our efforts to reduce carbon pollution have helped grow our economy while protecting the environment – a win-win.” – Gregor Robertso, 39th Mayor of Vancouver, British Columbia, from 2008 to 2018.

The video embedded below looks at the use of carbon trading and carbon taxes as policies to cut emissions: