As a verb, the word claim commonly means to assert or profess that something is true. Examples of the noun form include making a claim on an insurance policy and making claims about product benefits in advertising. 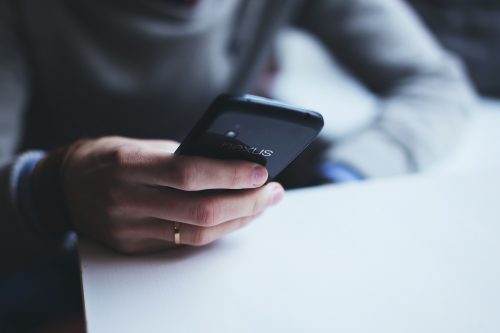 Some insurers allow you to submit claims using an app on your phone. Image: Pexels on pixabay.

The word is one of the 3,000 most common in the English vocabulary. It originates from clamare, the Latin for “call out.”

Online sources such as the Oxford Learner’s Dictionaries and Merriam Webster give numerous meanings of the noun and verb form. The following sentences offer examples of both.

The following sections deal more extensively with some common usages.

In literature and speeches

Claims are professions of the truth. Writers or speakers use them to make their case. As literary or oratory devices they can work singly or collectively, e.g., to build an argument.

Winston Churchill  used claims in his famous “we shall fight on the beaches” wartime speech. He delivered the speech to the House of Commons on 4 June 1940.

Those who study argumentation suggest that there are at least three types of claim:

Claims are the essence of advertising. The advertiser wishes to persuade the consumer that the brand in the advertisement is the best.

The Advertising Standards Authority (ASA) and the Committee of Advertising Practice (CAP) regulate advertising in England and Wales. You can read about their standards online. They concern the regulation of claims about products and services.

For example, in Section 03 on misleading advertising, the word appears more than 30 times. Here are two instances:

The ASA define “puffery” as obviously exaggerated claims that “consumers are unlikely to take literally.”

An insurance claim is a request for payout from a policy. The insured party makes the request to the insurer. The request is for payment to cover a loss described in their policy.

When the insurers receive the request, they validate it or deny it. If it is valid, they pay the policy holder or their approved representative.

There are many types of insurance. Examples include: life insurance, health insurance, car insurance, travel insurance, income protection, and mobile (cellphone) insurance. The policy describes the extent and limits of cover on specified events and losses.

The following is an example of making a claim on a house insurance policy.

Mary has house insurance that covers her house and its contents. One day, she noticed water seeping out of the side of a wall. Mary suspected a cracked drain and called the insurers.

The insurers recommended a company that came and inspected the drains with a camera. The company confirmed it was a cracked drain and gave an estimate for repair. The insurance company agreed to pay for the inspection and the repair. They sent Mary the payment and she then paid the drain company.

Sometimes, receiving a payout from an insurance policy can result in higher premiums in the future.