In a completely closed economy, there are no imports or exports. The country claims that it produces everything its citizens need. We also refer to this type economy as isolationist or an autarky.

A closed economy is the opposite of an open economy or a free-market economy. Open economies trade with other nations; they import and export goods and services. Hence, we also call them trading nations.

Maintaining a closed economy is more difficult today than two hundred years ago.

Certain raw materials are vital for the production of many products. For example, without oil, a country would not be able to function today. Many countries, such as Japan, need to import nearly all their raw materials. 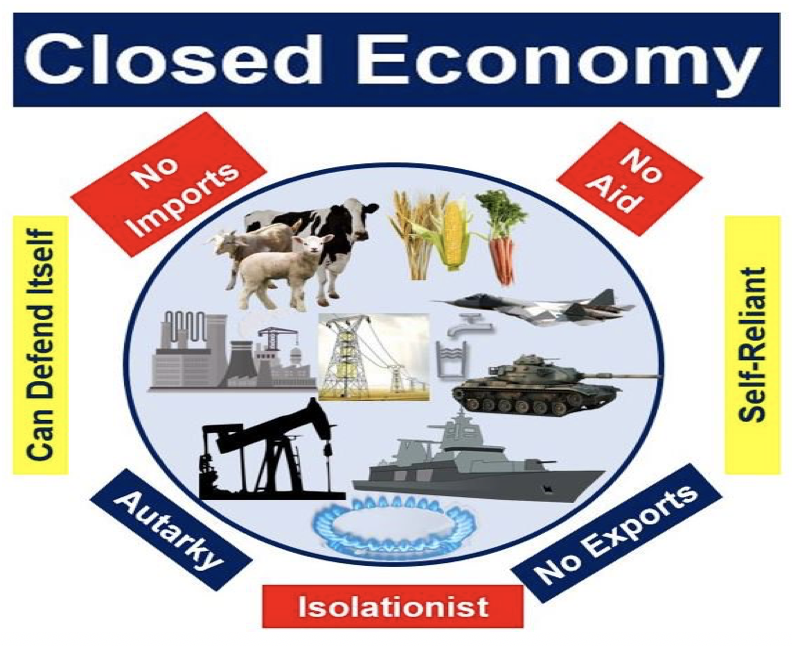 A closed economy is one that claims to be self-reliant. In fact, it is an autarky. It does not import or export. The idea is a myth because the largest black markets exist in the closed economies. Black markets sell imported goods.

Henry George (1839-1897), an American political economist wrote a book titled ‘Progress and Poverty.’ He published it in 1879. George explained that cities and nations that cooperate with each other are much wealthier than those that don’t.

George’s illustration consisted of a plot of undeveloped, resource-rich land. Twenty people had divided up that land. In other words, they owned one-twentieth each.

By cooperating intelligently, they could produce much more than if they worked in isolation, he explained.

Similarly, twenty nations cooperating intelligently can create more wealth than twenty countries can with no cooperation.

According to The Economist, a closed economy is:

“An economy that does not take part in international trade; the opposite of an open economy. At the turn of the century about the only notable example left of a closed economy is North Korea.” 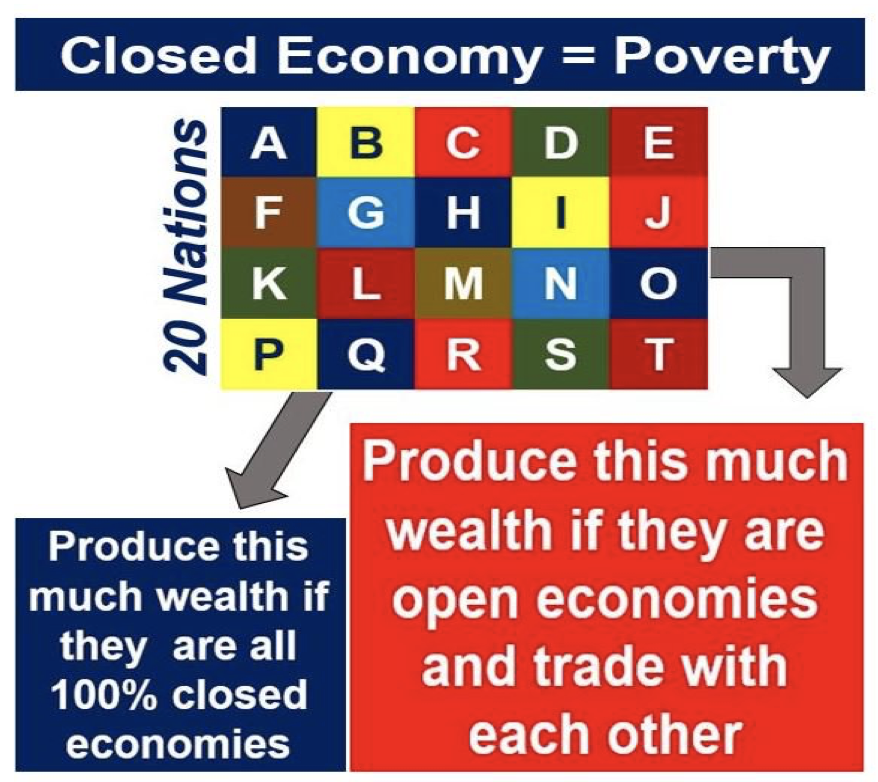 The wealth created by twenty countries that have closed economies is less than what twenty nations can produce if they cooperate intelligently. In other words, if they trade with each other.

Closed economy utopia is a myth

A closed economy or autarky is not a utopia. Many leaders have eventually found out the hard way. No country has ever been able to produce the full range of products and services its population demands. Additionally, producing all those goods at competitive prices is impossible.

Those who have tried to do so have condemned their systems to inefficiency. Their people lost wealth. Put simply; their countries became poorer while the trading nations got richer.

In a closed economy, citizens find the lack of goods intolerable. Consequently, black markets emerge, which import products from other countries.

And herein lies the myth – the autarky exists only in theory. The closed economy is not closed because the black market is importing goods.

The largest black markets in modern history have flourished in the Soviet Union and its satellite countries. North Korea and Cuba also have huge black markets. All these countries are or were closed economies.

In the Dominican Republic between the 1600s and early 1900s, rural peasants, freed slaves, and escaped slaves lived in total isolation. They lived in the forest deep in the interior of the country.

In Japan, until the 1850s when it opened to the west, it was a partial autarky. We call that period of isolationism the Edo Period. In Japan, people call it Sakoku (鎖国).

The empires of the 17th and 19th centuries pursued a policy of mercantilism. This meant that there was very little trade outside the empire. 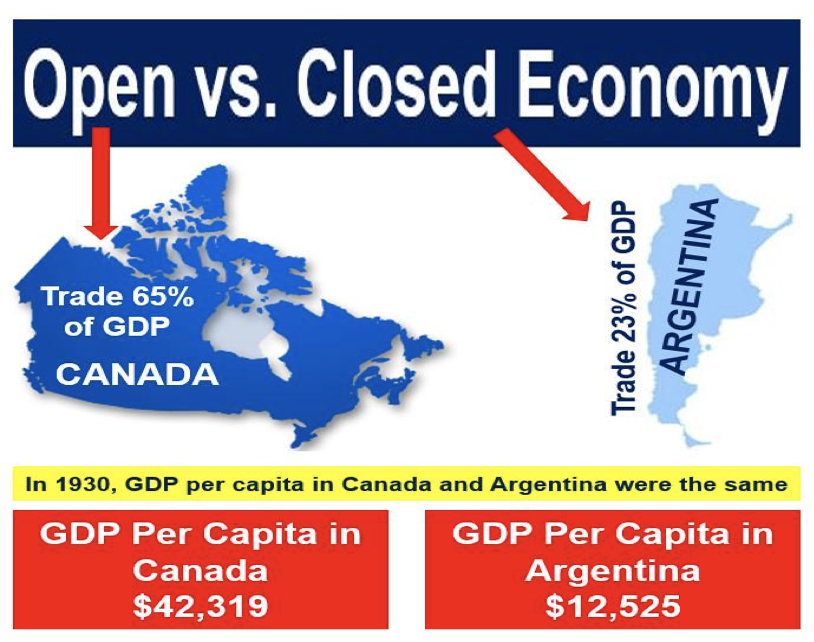 In the 1930s, Canada and Argentina stood neck-and-neck regarding economic development. Their GDPs per capita were similar. Over the last eighty-five years, Canada has been an open economy and Argentina a relatively closed one. Today, GDP per capita in Canada is 3.37 times greater than in Argentina. (Data: Trade % of GDP, World Bank. GDP per capita: Statistics Times)

US President Thomas Jefferson, in 1808, declared a self-imposed embargo on all shipping from abroad. This embargo lasted until 1809. The US was emerging from the American Revolution and feared the economic and military might of Great Britain.

In the 1930s, Adolph Hitler had a goal of self-sufficiency. The Nazis encouraged trade within its economic bloc but discouraged external trade.

Hitler especially disliked trade with the UK, France and Russia – countries against which he expected to be fighting in a war.

After its establishment as an independent state in 1950, India pursued a quasi-autarky. This policy continued until 1991.

In 1976, Enver Hoxha, Albania’s communist leader, turned his country into a quasi-autarky. After he died in 1985, the country began trading again.

Spain’s dictator, Francisco Franco, severely restricted international trade from 1939 to 1959. After the country started trading with other nations, the Spanish Miracle occurred. The Miracle was a period of rapid economic growth that lasted well into the 1970s.

Burma’s dictator, Ne Win, pursued the Burmese Way to Socialism from 1962 to 1988. During that period, it traded as little as possible with other countries. Today, the country’s name is Myanmar.

He wanted to reduce dependency on imports. He wanted this because his relationship with both Western and communist leaders had worsened.

South Africa had a closed economy forced upon it during the Apartheid period – from 1948 to 1991. The international community imposed economic sanctions.

Completely closed economies do not exist anymore. North Korea is the best example today of a nation aiming for total autarky. It is one of the poorest countries in the world.

Without food aid from abroad, millions of North Koreans would not be alive today. Hence, the country is not self-sufficient.

Brazil – the cost of a closed economy

Brazil is not a closed economy, but compared with other countries it is one of the least open. As measured by trade penetration, in 2013 exports plus imports equaled just 27.6% of GDP. Compare that to an average of 55% among the six countries with bigger economies than Brazil.

We frequently use Brazil’s large size to explain its relative lack of openness. However, this argument does not stand up to scrutiny, says The World Bank.

Given Brazil’s size, economists at the World Bank would expect its trade to be equal to 85% of GDP. In other words, it should be more than three times its actual size.

Very few companies in Brazil export. There are 20,000 exporters in Brazil, a country with 200 million people. Norway has approximately the same number of exporters.

However, Norway has a population of just over 5 million. Norway has one exporter for every 250 citizens compared to one for every 10,000 Brazilians.

The World Bank made the following comment regarding Brazil if it opened up to the world:

“Opening up and integrating more deeply into global value chains would result in the closure of uncompetitive production chain segments and their replacement with imports.”

“The surviving businesses would be more competitive thanks to their access to imported inputs, allowing them to create products of lower cost and higher quality.”

If Brazil’s economy had been more open over the past 40 years, it would be much richer today. In fact, it would probably be one of the world’s advanced economies.

This video explains what a closed economy and open economy are.