In most of Europe’s international insurance market, the term refers to the second meaning. In other words, the joint assumption of risk between some insurers.

Coinsurance, in which several insurers share the risk, is common in the European insurance market. Usually, one insurance firm will lead. That company will be responsible for various aspects of the insurance policy including the premium, claims.

The lead company will also be responsible for the insurance documents. In such cases, the company levies a charge. We call that charge a lead office commission.

According to The Free Dictionary, coinsurance is:

“A provision that provides that the insurance company and the insured will apportion between them any loss covered by the policy according to a fixed percentage of the value for which the property, or the person, is insured.”

In health insurance, the term has a similar meaning to copayment. However, copayment is usually fixed while coinsurance is a percentage. In other words, the percentage that the insurance company pays after the insureds exceed their policy’s deductible.

For example, let’s suppose Mary Smith’s health insurance plan’s allowed amount for consulting a doctor is $100 and her coinsurance is 20%.

– If she has paid her deductible, she pays $20 while the insurer pays the rest.

If her total out-of-pocket costs come to $6,850, she will pay only that amount. Only that amount including her deductible and coinsurance. For the rest of her plan year, the insurer would pay for all services it covers.

We define coinsurance under a property policy as the sharing of risk between the insured and insurer. We usually express this as a percentage.

What does it mean if an insurance policy is subject to a coinsurance requirement? It means the insured must satisfy the specified criteria whenever there is a loss claim.

The majority of claims are just for a partial loss. Therefore, insuring for less than the total asset value may be advantageous, because your premiums will be lower.

However, be careful. If there is a total loss, you will not be able to replace what you have lost. That is unless you have lots of funds. 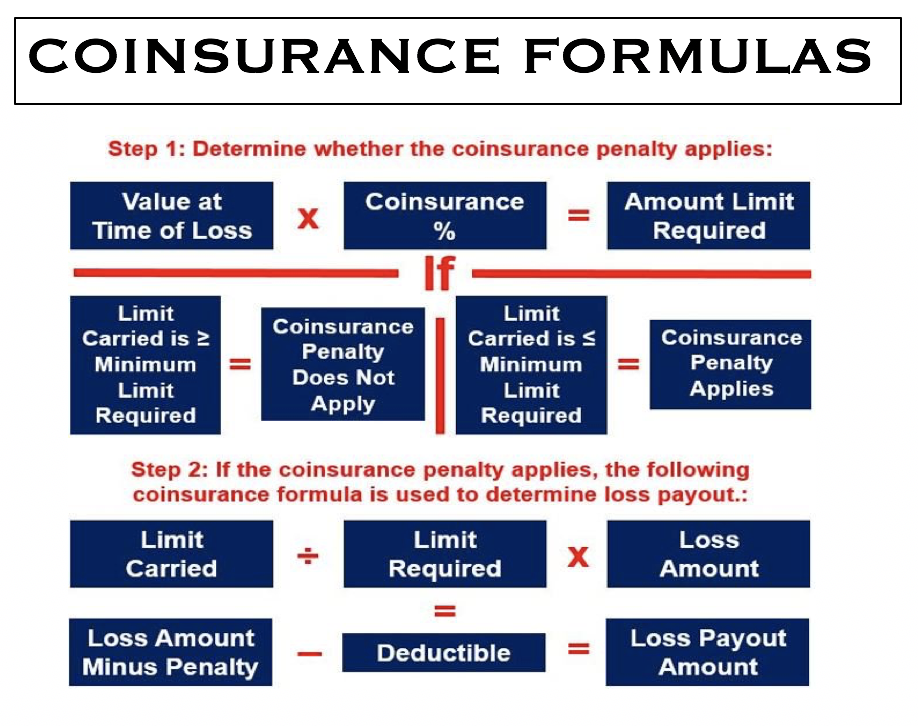 The following is a simple example for calculating the requirement for property coverage with a lower coinsurance amount:

Mr. Brown must insure his property and pay corresponding premiums for at least $720,000 in replacement coverage.

If Mr. Brown insured for less than this amount, he would face a coinsurance penalty. In the formula, you can see a scenario in which he does not meet the coinsurance requirement. In this case, his insurer would only pay a percentage of his total loss. Namely, up to the value of his insurance coverage.

Let’s assume that Mr. Brown had purchased $650,000 of building and contents insurance. He then suffered a partial property loss.

The cost of repairs was $300,000, and he had a $1,000 deductible. His insurance company would calculate how much they owed him in the following way:

What would have happened had he initially purchased the insurance required and suffered a $300,000 loss?

He would have had at least 80% coverage on the $900,000 value of his insured property. Therefore, he would have only been liable for the $1,000 deductible.