A company is a legal entity that people form. It allows them, usually as shareholders, to buy and sell goods and services. In most cases, companies want to make a profit. However, some companies are non-profit organizations.

Just like humans, companies can hire and fire workers. They can also buy shares in other companies, sue, and be the target of a law suit. Additionally, companies can borrow and lend money, and own property.

As legal entities, companies have similar rights and responsibilities to people. They may be responsible for human rights violations. They may also exercise human rights issues against individuals or the state.

The term is synonymous with ‘firm.’ We can call most commercial entities either companies or firms. However, we refer to law or accountancy partnerships only as firms.

We view corporations as large entities. Corporations typically have subsidiary companies. They are companies because they are in business.

Corporations in the United States are limited liability companies. In other words, their shareholders are only liable for the shares they own.

In most cases, the terms ‘company’, ‘firm’ and ‘corporation’ mean the same. However, professional partnerships such as lawyers, accountants, or consultants are firms. They are not companies.

In the UK, some companies that the state owns are ‘corporations.’ For example, the BBC (British Broadcasting Corporation).

Senior management in companies will usually develop a set of organizational objectives. They will also develop a strategy for achieving those objectives. They do this because it helps employees understand where the business is heading. Employees also need to know how the company plans to get there.

The Financial Times Lexicon defines a company as follows:

“An organization that makes or sells goods or services in order to make a profit.”

When we incorporate companies, we create separate legal entities to carry out business. According to New Zealand’s Companies Office, every company has certain basic elements:

What is a limited company?

Limited companies are organizations that people can set up to run their business. They are responsible in their own right for everything they do. However, a limited company’s finances are separate from the owners’ personal finances.

All profits that companies make belong to them after they pay corporate tax (UK: corporation tax). Only after paying the tax can the shareholders share their profits.

According to the British Government, every limited company has members. In other words, organizations or people that own its shares. Directors, who in most cases own shares, are responsible for running the companies.

The vast majority of companies are ‘limited by shares.’ This means that the shareholders’ responsibilities for the company’s debts do not go beyond the value of their shares.

Directors of companies are not personally liable for the business’ debts. In other words, if the company goes bankrupt, their private belongings and savings are safe. 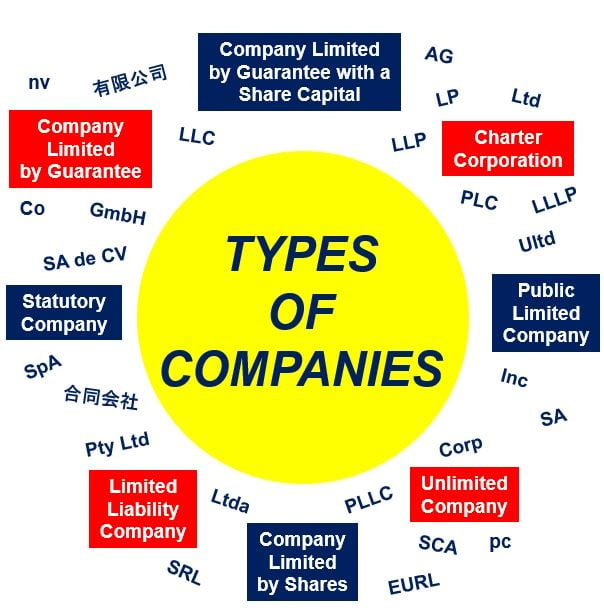 There are thousands of types of companies globally. Some have shares that investors buy and sell on a stock exchange. Others, on the other hand, only change hands through private arrangement.

For example, imagine you set up a limited company and issued 1,000 shares at $1 each. You and a friend own 500 shares each. You have each paid in full for 250 of these shares.

If the company goes bust, the maximum you and your friend are liable for is $250 each. In other words, the value of the shares you both own but have not paid for.

In some cases, the shareholders back the company up to a specific amount if things go wrong. We call this a ‘private company limited by guarantee.’

According to the Online Etymology Dictionary, the term first appeared in the English language in Britain in the middle of the 12th century. It came from Old French Compagnie meaning ‘society, friendship, body of soldiers, intimacy.’ The Old French word came from Late Latin Companio.

A young company that registered at least 20% growth for four consecutive years we call a ‘gazelle.’

Video – What is a company?

In this UdaCity video about startups, the speaker begins by explaining what a company is.