What is over-the-counter or OTC? Definition and meaning

Over-the-counter, or OTC, refers to anything that is bought and sold directly between seller and buyer, away from a formal securities exchange – the trading is carried out directly either by computer, email, or over the telephone. An over-the-counter stock is one that is not listed on an exchange, such as a stock market. OTC derivatives are traded privately and bilaterally – between two parties – and not on a formal exchange platform.

For the meaning of over-the-counter medications, see the last section of this article.

Non-prescription medicine trading has no physical location – it does not take place at the New York Stock Exchange, the London Stock Exchange, etc. OTC trading occurs through a dealer network. 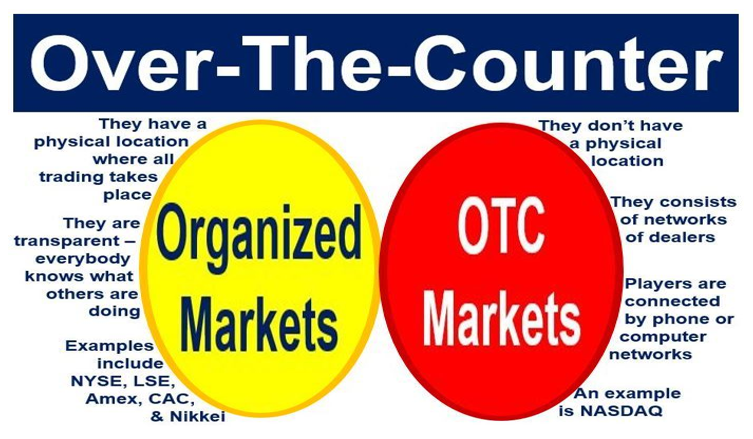 Over-the-counter or OTC refers to a trade that is not carried out on a formal exchange. In the world of finance, people often say ‘off-exchange trading’. Typically, companies offering OTC trades quote the prices at which they are willing to buy-sell assets, giving a price for each trade – unlike on-exchange trades, where several buy-sell prices are observable from many different sources. Although Nasdaq is considered a stock exchange, it operates as a dealer network, i.e. like an OTC market.

Over-the-counter may also refer to debt securities and a wide range of financial instruments that are not traded on a formal exchange but are usually sold by investment banks that seek to raise funds for particular purposes.

In most cases, non-prescription medicine financial instruments and products are traded for smaller commercial entities that fail to meet the criteria for listing on the LSE (London Stock Exchange), NYSE (New York Stock Exchange) and other formal platforms. Sometimes they are traded as unlisted stock.

In an OTC market, trade can be carried out between two participants without anybody else being aware of how much money was involved.

Over-the-counter markets are typically much less transparent than exchanges. Exchanges are subject to considerably more regulations and oversight compared to OTC markets. According to the US Securities and Exchange Commission: “The OTC Bulletin Board (OTCBB) is an electronic inter-dealer quotation system that displays quotes, last-sale prices, and volume information for many OTC equity securities that are not listed on a national securities exchange. Securities quoted on the OTCBB include domestic, foreign and American depository receipts (ADRs). (Image: adapted from finra.org. FINRA stands for Financial Industry Regulatory Authority)

When the financial market is stable, OTC markets generally function well. However, during times of financial stress, as occurred during the 2007/8 global credit crisis, their lack of transparency can exacerbate problems.

During the 2007/8 crisis, mortgage-backed securities, which were traded exclusively in the Non-prescription medicine markets, could not be priced reliably due to a lack of liquidity. Consequently, a large number of dealers withdrew from the market altogether, which made the liquidity problem considerably worse – the global credit crunch was mainly caused by a severe liquidity problem.

– Customer Market: dealers trade with institutions and corporations (their clients).

Prices that dealers quote their clients are not always the same as those quoted to other dealers. The bid-ask spread between dealer and client is often wider than between dealers. The world’s most popular over-the-counter market is FOREX, where currencies are exchanged between parties rather than on exchanges. FOREX is decentralized and takes place twenty-four hours a day, unlike exchanges which have fixed opening hours. (Image: adapted from blog.equinix.com)

In the world of healthcare, over-the-counter medications, also known as nonprescription medicines or Rx, are those that can be purchased without needing to present a doctor’s prescription. For example, aspirin, Tylenol (paracetamol), and many cough syrups can be bought directly at a pharmacy without having to first go to your doctor to get a prescription.

The US Food & Drug Administration (FDA) has the following definition on its website:

“Over-the-counter medicine is also known as OTC or nonprescription medicine. All these terms refer to medicine that you can buy without a prescription. They are safe and effective when you follow the directions on the label and as directed by your health care professional.” Of the top ten non-prescription medicine blockbusters in the pharmaceutical sector, eight target cough and cold symptoms. If an intelligent alien studied this chart, it would probably conclude that humans are riddled with pain and upper-respiratory tract problems. (Data source: visiongain.com/Report)

According to Mordor Intelligence, the worldwide OTC drugs market was estimated to be worth $133.25 billion annually at the end of 2016. This figure is expected to reach $220 billion in 2021. During the 2016-to-2021 forecast period, the market is expected have a compound annual growth rate (CAGR) of 10.6%.

In an article published in August 2016, Mordor Intelligence wrote:

“A switch by major pharmaceutical companies from Rx to OTC with the objective of investing less and earning more has been instrumental in the growth of the market in past 10-15 years.”

“Companies such as Pfizer, Johnson and Johnson, Sanofi, GSK etc. have increased their focus on OTC drugs development to fetch benefits from this promising market.”

The top over-the-counter markets for OTC drugs in 2015 were the United States, France, Germany, China and Japan – which together accounted for almost 56% of global sales.

However, in the near future these figures are expected to change. Latin America and Asia-Pacific will grow it a significantly faster rate than the advanced economies of North America and Western Europe.

Over the next five years, the following markets are expected to grow/contract:

– China: with the fastest growth in the world.

– Latin America: with the second-fastest growth.

– The Central European will expand more rapidly that the Western European ones.

– The Japanese market, which fell by -2% over the past five years, is expected to continue shrinking.

Video – What is over-the-counter?

In this video, Amy Anderson talks about over-the-counter or OTC in the world of business and finance. She begins by explaining that OTC securities are those that were unable to make listing requirements and are not traded on the exchange – hence, they are also called ‘unlisted’.