Debt service coverage ratio or DSCR is the ratio of cash available for debt servicing to interest, principal, and lease payments. In other words, it measures a company’s ability to service its current debts. With DSCR, we measure it by comparing the company’s net operating income with its total debt service obligations.

We also call it the debt coverage ratio.

The DSCR tells us much more about an entity’s ability to pay its debt than the debt ratio does. An entity refers to any company or organization that pays taxes and makes a profit or loss.

Debt service coverage ratio also exists in Government finance. It refers to how much a country must earn from exports so that it can pay its annual interest and principal payments on its external debts.

We use DSCR when measuring a company’s ability to produce enough liquid cash for its debt payments. We also include lease payments in those obligations.

According to Divestopedia, debt service coverage ratio is:

“The amount of cash available to service debt in the form of interest, principal, and sinking fund payments. It is used to determine if a firm has enough cash to cover its debt.”

Likelihood of obtaining a loan

Companies with high debt service coverage ratios find it easier to get loans than those with low DSCRs.

In commercial banking, we also use the term to express the minimum ratio that a money lender accepts. In other words, it may be a loan condition.

Breaching a DSCR covenant could be seen as an act of default on some occasions.

The DSCR is important to both investors and creditors. However, creditors analyze it more often. Creditors are particularly interested in an entity’s DSCR because it measures its ability to pay back debts.

Creditors want to know what a company’s cash position is. They want to know about its cash flow as well as how much debt it currently carries. Additionally, creditors need to know how much cash an entity has available to pay its current and future debts.

We calculate the DSR by dividing net operating income by total debt service.

Net operating income equals all cash flows that remain after paying off all operating expenses. We sometimes refer to this as EBIT. EBIT stands for Earnings Before Interest & Taxes.

Total debt service refers to all the costs the debtor incurred to service its debt. This usually includes principle payments, interest payments, and other obligations. The debtor is the person, party, or entity that owes money.

John Doe Electrics is a fictional store that wants to remodel its storefront. However, it does not have enough money to pay for it. It has approached some banks for a loan.

As it already has several loans, the store is a bit worried it won’t be able to borrow any more.

The calculation for John Doe’s debt service coverage ratio is:

Therefore, John Doe’s DSCR = 1.66. See the breakdown of the figures in the image below. 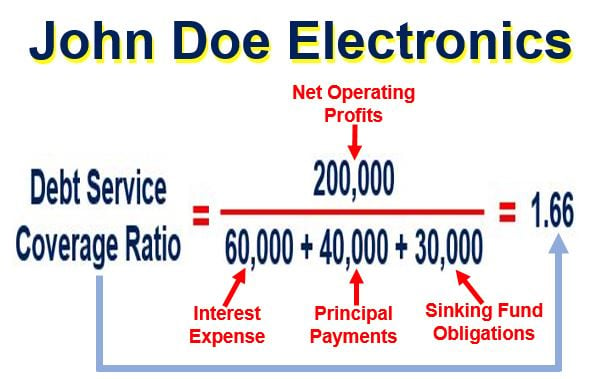 This means that John Doe’s operating profits provide enough to pay its current debt service costs. It is then left with 66% of its profits. Banks are likely to view its loan application favorably. However, this may depend on how much it wants to borrow.

The DSCR is a measurement that tells us how much cash flow is available to service an entity’s debt. It helps banks evaluate a loan applicant’s creditworthiness.