What is default? Definition and examples

The noun ‘Default’ refers to the failure to fulfil an obligation. In the world of business and finance, it usually refers to failure to pay back a loan.

The verb ‘To Default’ means to fail to repay a loan. 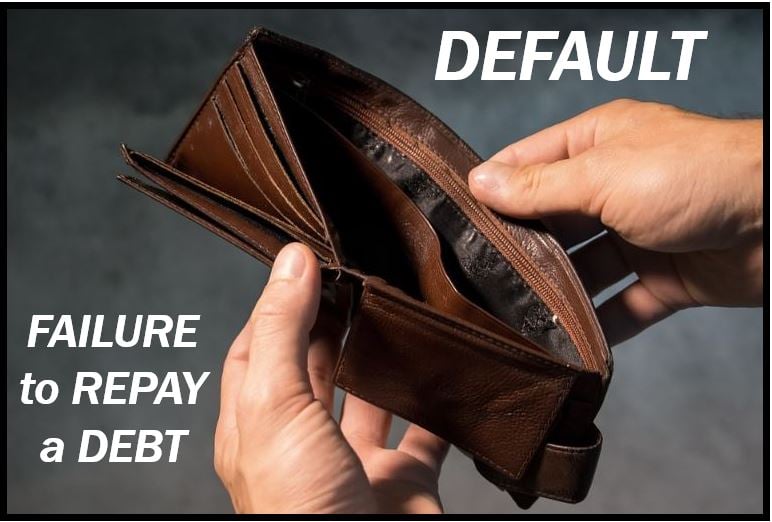 In computer jargon, the term means to revert automatically to its original state or a preselected option.

When a party in an agreement or contract fails to fulfil their obligation, we can say that it is a case of wilful default.

This article focuses on the meaning of the word in a business and finance context.

Default is the failure to pay back a debt. It includes failure to pay the interest on the loan, the principal, or both. The principal of a loan is the amount the debtor borrowed, before adding on interest. A debtor is the party that owes money.

The following can be classed as a default:

The word Debtor means the Borrower; it is the opposite of Creditor (lender).

People, companies, organizations, and even whole governments or nations may fail to repay a loan.

In 2001, Argentina failed to repay $93 billion of its foreign debt. See below how we can describe what happened using the word as either a verb or a noun:

In 2001, Argentina defaulted on $93 billion of its foreign debt.

Foreign debt means the same as external debt. It is the total debt a government or nation owes to creditors abroad.

A secured loan is one in which the borrower has committed a specific asset as security.

If the borrower defaults, the lender has recourse to repossess the asset and sell it to recover the money it lent. We also call this kind of loan a secured debt.

Sometimes, we refer to the asset that the borrower provided as security on the loan as collateral.

When we take out a mortgage, i.e., a loan to buy a house, the lender has recourse to repossess your home if you default. The vast majority of mortgages worldwide are secured loans.

Most companies that are in default file for bankruptcy protection. It is a legal status initiated by a court order, in most cases by the debtor. Sometimes, but less commonly, a creditor may initiate the court order.

When you file for bankruptcy protection, you avoid a full-blown default.

When a company goes into bankruptcy, however, it is for all intents and purposes a default because its creditors are rarely paid back in full.

During the 2008 Global Financial Crisis and the Great Recession that followed, there was a huge number of defaults. Law courts across the world were busy dealing with hundreds of thousands of bankruptcies.

When a country fails to repay a loan, we call it a sovereign default. Governments borrow money by issuing bonds. Investors consider bonds as super-safe investments. We do not expect governments to default.

However, it can happen. When it does, the consequences for that country can be devastating. Its financial markets usually collapse, its currency will most certainly devalue, and it will probably sink into a recession.

A country that has defaulted will find it much harder in future to borrow money. If failure to repay a loan triggered a serious economic meltdown, it is a time when the nation most desperately needs to borrow. Not having access to funds can mean destitution and disaster for its population.

A sovereign default can cause problems and financial instability abroad. When Greece defaulted on a repayment to the IMF (International Monetary Fund) in 2015, the whole European Union shuddered.

However, Greece was lucky. The EU consists mostly of advanced economies with the financial resources to bail out the country. When a developing country falls prey to sovereign default and it does not receive enough financial help, the negative consequences can last several decades.