What is a mortgage?

A mortgage is a loan that individuals and businesses use to raise money to purchase a property, such as a house, apartment, or office building. The vast majority of people need to take out a loan when they purchase their first home. We also call it a mortgage loan.

People who already own a property may also take out a mortgage to raise funds for any purpose – they put a lien on the property being mortgaged.

A ‘lien’ is a right by the lender to keep possession of the borrower’s property until he or she has fully repaid the loan. In other words, the borrower and lender agree to use the property as security on the loan.

If the mortgagor (borrower) is unable to keep up the loan repayments, the lender can seize that property and sell it to recover the money. When that happens, we call it a foreclosure. Loans and credit can influence your mortgage pre-approval. Here is how much a student loan can affect mortgage pre-approval.

According to Finance Gradeup, a mortgage is:

“A legal agreement that allows somebody to borrow money to buy a house or apartment. The lender, i.e., the bank, charges interest on the loan.”

The word ‘mortgage’ in English comes from Old French ‘mort’ (death) and ‘gage’ (pledge) – a ‘death pledge’. Mortgage in modern French is hypothèque, hipoteca in Spanish and Portuguese, Hypothek in German, mutuo in Italian, ипотека in Russian, 抵押 in Chinese, and 住宅ローン in Japanese.

The practice of pledging an asset, such as a house, as collateral on a loan is known as hypothecation.

Mortgagors may be private individuals or businesses. Mortgagees (lenders) are generally financial institutions, such as a credit union, bank, or building society (UK). The loan arrangements may be made directly between borrower and lender or through intermediaries.

Most house purchases are done with mortgages

In the first quarter of 2014 in the United States, forty-three percent of all residential property sales were all-cash sales (no lending involved), which was considerably higher than 38% in the previous quarter and just 19% in Q1 2013, according to Market Watch. The percentage plummeted to 24.6% in May 2015, according to RealtyTrac.

Thirty-six percent of all homes bought in the UK in 2013 were all-cash transactions, according to Property Wire.

While there are hundreds of types of mortgages across the world, they have several characteristics in common.

Term – most mortgage loans have a maximum term, i.e. a period after which an amortizing loan will be repaid. In some cases there is no amortization and the borrower has to make a huge payment at the end, as is the case with a balloon mortgage.

How much and how often – how often installments are paid is generally set at the beginning of the term, and in most cases these occur monthly. How much is paid depends on what type of mortgage it is. In some cases the borrower may apply to alter the arrangement during the term.

Down payments and loan to value ratio 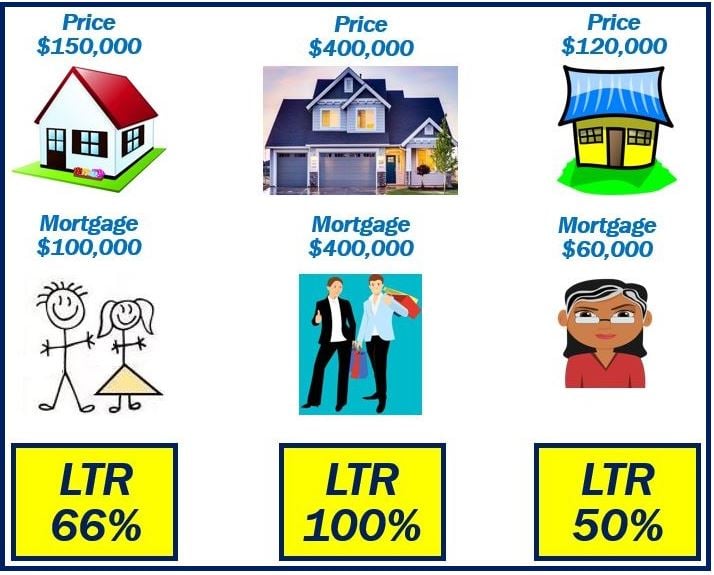 Most lenders require that the borrower make a down payment, i.e. to contribute a portion of the cost of the property. This may be a proportion its value.

The loan to value ratio (LTV ratio) is used by lenders to assess the risk of people wanting to borrow money. For example, if the house you want to buy is worth $200,000 and you want to borrow $100,000, the LTV ratio is 50%. As far as the lender is concerned, the greater the LTR ratio, the higher the risk.

Lenders worldwide will only offer a loan to buy a home after an appraisal is carried out, because the property is the underlying asset that serves as security (collateral) for the money lent. An appraisal is an independent assessment of a property’s value, which is done by an expert for a fee.

The lender will only consider approving a mortgage application after carrying out a valuation of the property.

A wet loan, also known as a wet mortgage, is one in which the funds are released before all the paperwork has been completed. This type of loan is useful if you are in a ‘sellers’ market’ and need to act swiftly.

A dry loan is the opposite – the funds are only released after all the paperwork has been completed, checked, and signed by all parties concerned.

The mortgage market is massive

According to the Financial Conduct Authority, the outstanding value of residential mortgage loans in the UK was £1.451 trillion in Q1 2019, which was 3.4% greater than in Q1 2018.

Over the past one-hundred years, home ownership has changed dramatically. In the US in 1920, there were approximately four times as many renters as homeowners. Today, more than 60% of American adults own their homes.

Video – What is a mortgage?