What are the factors of production? Definition and meaning

The factors of production are the building blocks of any economy. In other words, they are the inputs that we use to produce goods and services so that we can make an economic profit.

We divide the factors of production into the following four categories: Land, Labor, Capital, and Enterprise. 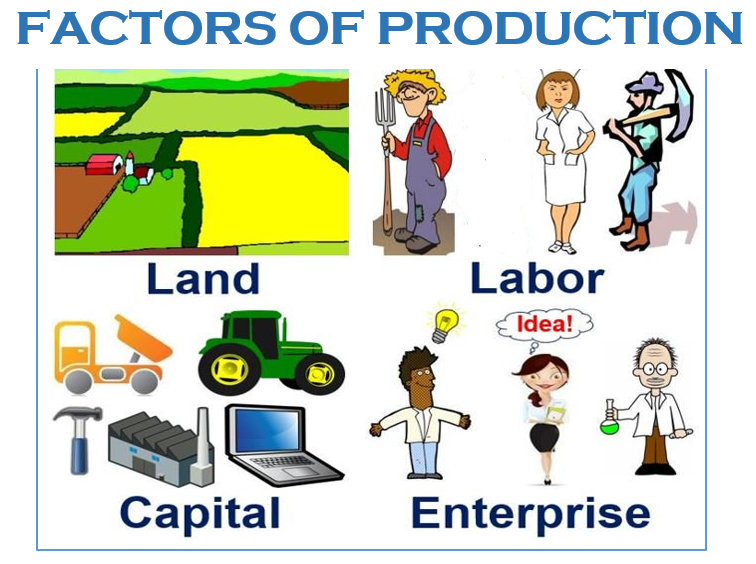 According to the Bank of England, in the short to medium term, estimates of a country’s productivity can be affected by the intensity with which factors of production are utilized.

This factor includes land plus anything that comes from the land. This also includes any natural resource we use to produce goods and services. Forests, coal, natural gas, copper, oil, and water, for example, belong to the category common land or natural resources.

Labor refers to the effort that humans contribute to the production of goods and services. In other words, ‘workers.’

Resources include, for example, the work that the engineer who designed a bridge did. It also includes everything the waiter in your local restaurant does when you want to order a meal.

Any person who has received money for work has contributed labor resources to the production of goods or services. We refer to labor resource income as wages. Wages, for most people, are their largest source of income.

Capital includes machinery, tools, and buildings. Specifically, it includes those elements that we use to produce goods and services. Examples include computers, delivery vehicles, conveyor belts, forklift trucks, hammers, etc.

The type of capital we utilize depends on the work we are doing.

For example, a teacher uses desks, a whiteboard, and textbooks to deliver education services. A doctor, on the other hand, uses an examination room, a stethoscope, and other medical devices.

We refer to the income of capital resource owners as interest.

Entrepreneurship or enterprise is what we need to combine the other factors of production – capital, labor, and land. Specifically, we combine them with the aim of earning a profit.

The most successful entrepreneurs are people who find new ways to produce goods or deliver services, i.e., innovators. Innovators also create new goods and services and bring them to the market.

Many of the innovations we see around are exist thanks to entrepreneurs.  Bill Gates and Henry Ford, for example, combined capital, labor, and land in new ways.

Entrepreneurs have helped build some of the world’s largest corporations. They have also created many small businesses in your neighborhood. They thrive in economies where they have the freedom to set up businesses and purchase resources freely. The entrepreneur earns profit. 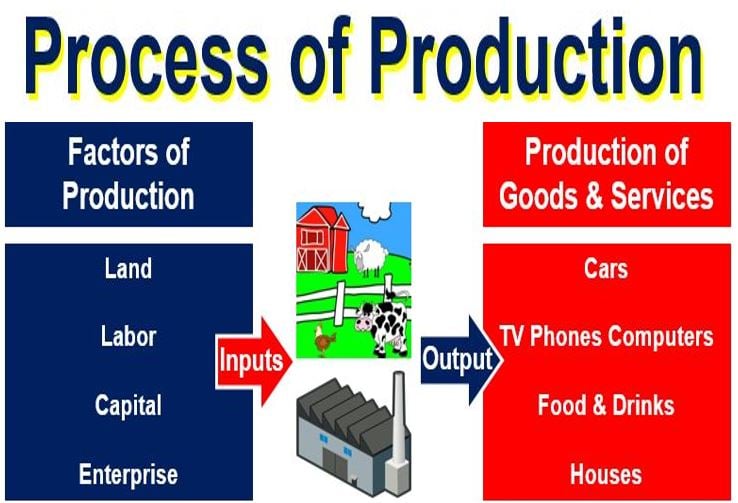 The process of production combines various inputs (Factors of Production) in order to make something for consumption (the output).

We refer to factor subdivisions as the 4 Ms: management, machines, materials, and money. Over the past few years, knowledge has become recognized as distinct from labor, and potentially a factor of production in its own right.

Money isn’t a factor of production

Why don’t we include money mentioned as one of the factors of production? Isn’t it a type of capital?

The Federal Reserve Bank of St. Louis says that in this case, it does not class money as capital because it is not a productive resource.

We can use money to purchase capital, i.e., devices that help produce things. However, money itself does not produce anything.

You cannot use a $50 bill to hammer a nail into wood or transport a shipment of merchandise. In this context, merchandise means goods).

Money is just the facilitator of trade, but it is not a productive resource in itself.

Availability of goods and services

Consider a man’s cotton shirt. We grow the cotton on the land, which uses water and other resources. Both the land and water are limited resources. We could have used those resources to grow different crops.

The workers who cut the cotton and make the shirt in the factory are limited labor resources. They could, for example, have spent their working time chopping down trees.

Resources are limited; their scarcity means that producing some goods and services leaves others unproduced.

Primary and secondary factors of production

The are two kinds of factors of production. Primary factors include land, labor and capital goods we use for production. They facilitate production but do not become part of the product. Neither do they transform significantly in the production process.

Land includes both the site of production as well as the natural resources above or below the soil.

Secondary factors include materials and energy. They are secondary because we get them from land, labor, and capital.

Other schools of thought insist that entrepreneurship is simply a kind of labor or human capital and should not be treated separately.

The Marxian school sees labor as the primary factor of production. Marxists argue that we require labor to produce capital goods and to utilize the gifts of nature.

The ft.com/lexicon defines the factors of production as:

“The elements used to produce economic goods, in other words, land, labor, capital and enterprise.”

When the factors of production are at maximum, any additional production will result in greater costs per unit, so says the law of increasing costs.