What is fair trade? Definition and meaning

Fair trade can mean a social movement which aims to get developed nations to pay a ‘fair price’ for goods produced in developing countries. It also refers to only purchasing imports from places where employees are working in a safe and comfortable environment, and get paid reasonable wages.

Others define the term as a business environment where there is a level playing field – nobody subsidizes their goods, places unfair taxes on imported products, or does anything to tip the balance in favor of one producer or country. We often use the term ‘fair competition’ with this meaning.

According to the Cambridge Dictionary, fair trade is:

“A way of buying and selling products that makes certain that the people who produce the goods receive a fair price.”

Do not confuse the term with fair value, which is the price that both the seller and buyer are happy with.

Fair trade – the eye of the beholder

What may seem as ‘fair’ for one person could be a disaster for another.

Imagine an extreme situation before the days of electricity and gas lights, when the only way we could light our homes was with candles.

The candle makers’ biggest competitor was the sun. For the candle maker, fair trade would be everybody being forced to board up their windows. Then their homes were in continuous darkness. Would the rest of the population think this was fair? It is doubtful.

In the United States today, blue-collar workers complain that their counterparts in Mexico earn much less, and because of this are the cause of unemployment in the US. They point to the number of American factories that close down and open up south of the border.

American blue-collar workers would like the government to impose an import tax on manufactured goods that came from Mexico and other low-wage countries. For them, fair trade would be an import tax.

Mexican farmers say that it is unfair that the US government subsidizes its farmers.

They claim this is partly the reason why they have to abandon their farms because they are unable to compete effectively against US’ artificial prices. Subsequently, they emigrate the USA looking for work.

Their definition of fair trade would be for the US government to stop subsidizing agricultural goods.

According to the World Fair Trade Organization (WFTO):

“Fair Trade is a trading partnership, based on dialogue, transparency, and respect, that seeks greater equity in international trade. It contributes to sustainable development by offering better trading conditions to, and securing the rights of, marginalized producers and workers – especially in the South.”

The principle core of the WFTO, with the help of consumers across the world, is to engage actively in supporting producers, raise awareness, and campaign for changes in the rules and practices on how trade is currently conducted.

Producers, wholesalers and retailers who participate in the fair trade movement can be recognized by the WFTO logo.

WFTO says there is more to fair trade than just trading. It also: 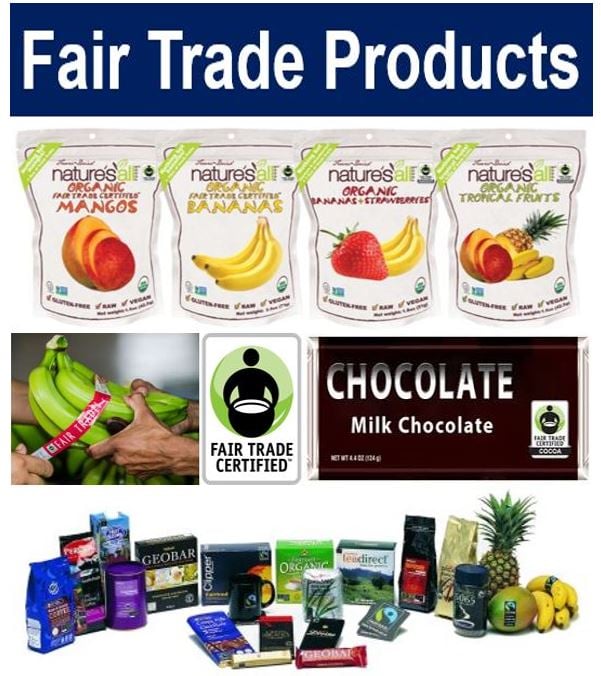 The range of fair trade products in the shops is increasing every year. Look out for the logo, which could be one of several different organizations.

Several studies have shown that fair trade is having a beneficial effect on many farmers in the Global South. Global South means developing countries.

A study in Guatemala involving 34 coffee growers found that 22 of them had a fair understanding of fair trade based on internationally-recognized definitions.

Three of them had a deep understanding of it. They even had knowledge of both fair market principles and how fair trade benefits them socially.

Three of the interviewees said they also joined the Fair Trade movement to raise money for social projects. They were also keen to take advantage of the specialized training that the cooperative offered.

Unfortunately, most farmers across the world have never heard of the Fair Trade movement. They have no idea that there is an organization out there that can help them. If they knew, they could get better prices for their goods and earn more.

Additionally, many consumers in the advanced economies have no idea how little farmers earn in developing countries. Specifically, consumers know little about people who produce the goods that they buy at their local supermarket.

Virtually everybody drinks coffee. What most people do not know is that coffee growers typically earn less than two dollars per day. Imagine trying to live on $60 per month. That is approximately seven hours’ work in the US, UK, Canada, Ireland, or Australasia on the minimum wage.

Farmers wanted consumers to know that this type of trade is important for supporting their cooperatives and their families.

On its homepage, FairTrade writes:

“With Fairtrade you have the power to change the world every day. With simple shopping choices you can get farmers a better deal.”

“And that means they can make their own decisions, control their futures and lead the dignified life everyone deserves.”

Video – What is Fairtrade?

This Co-op video explains what the cooperative Fairtrade is and what it aims to achieve.