What is fair competition? Definition and examples

Fair competition refers to a free market in which all the players operate on a level playing field. Businesses base their competitive practices on price, quality and customer service rather than, for example, predatory pricing.

If a company engages in competitor bashing or the abuse of near-monopoly powers, it is not competing fairly. In other words, practices which public law condemns do not exist in a market with fair competition.

Predatory pricing is a strategy that an abusive market leader takes to kill off competitors. The predatory pricing company drastically reduces the product’s price. When its competitors have died off, it then pushes its price back up.

Regarding the meaning of fair competition, mbaskool.com says the following:

“When the competition between companies or businesses is based on factors like quality, price and customer service and not on practices which is condemned by public or law like predatory pricing or bashing of competitors.”

Companies do not harm their rivals’ ability to compete in a marketplace where competition is fair. There is no zero-sum game philosophy in such markets. 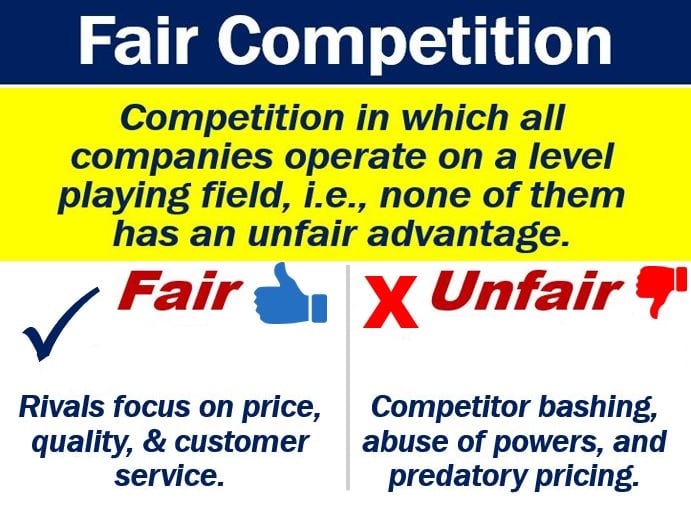 Do not confuse the term with ‘fair trade,’ their meanings are often quite different.

Fair trade is a cooperative movement. Its aims to make sure that producers and purchasers sell and buy at a fair price. In other words, fair trade is a movement that tries to prevent exploitation.

When consumers see ‘fair trade’ on a product’s packaging, we think about the fair treatment of workers. For example, ‘fair trade’ coffee means that the workers in coffee farms and distribution centers receive a decent wage.

With fair trade, workers receive training and have a good chance of improving their standard of living.

However, fair trade, when talking about imports and exports at national level, can mean fair competition.

When competitors can compete freely on a ‘level playing field,’ economies are more likely to thrive.

Economists say that fair competition has improved dramatically since the 1990s, i.e., when people started going online in large numbers.

Small online businesses today can compete against major companies in many different fields. The online world has changed the marketplace significantly.