What is a fat cat? Definition and examples

‘Fat cat’ is a derogatory term for a wealthy business person or politician. The speaker disapproves of the way the person uses or acquires his or her power and wealth. Although fat cat may refer to either men or women, in most cases, it refers to men. A fat cat is also a wealthy individual who contributes heavily to an election campaign or political party.

A fat cat is a greedy, selfish, smug, and wealthy person. They exploit their position for personal gain. In many cases, their gain is at the cost of other people or businesses.

Collins Dictionary says the following regarding the term:

“If you refer to a businessman or politician as a fat cat, you are indicating that you disapprove of the way they use their wealth and power.”

In the United States, fat cats are recipients of the ‘perks of power.’ They can purchase access to top politicians and influence policy. They can even veto cabinet appointments. 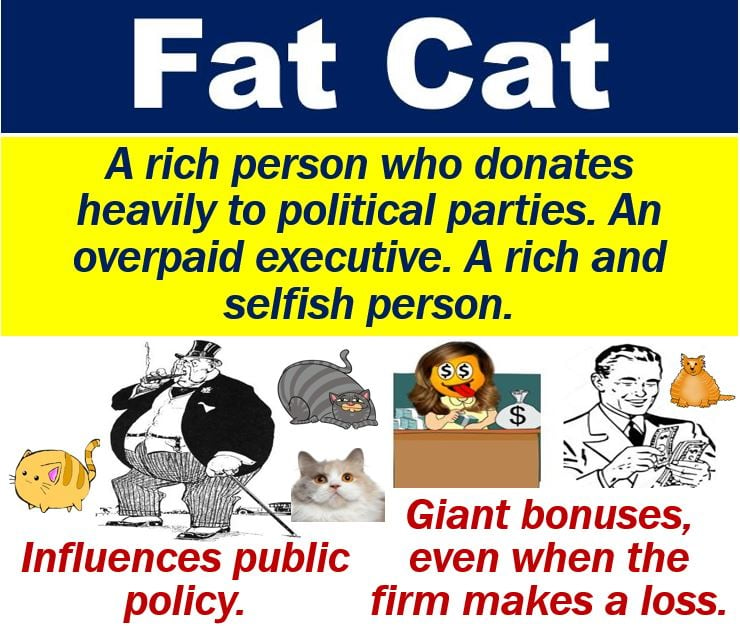 A fat cat is somebody who makes lots of money and enjoys a privileged position in society. We use the term when we disapprove of what the person does or represents.

In the United Kingdom, a fat cat is a company executive who is paid too much. Their pay or bonuses do not reflect their performance. Bonuses are supposed to reflect either company or employee performance.

During the Global Financial Crisis of 2007/8 and the Great Recession that followed, the British taxpayer bailed out many banks. A bailout is the act of saving a company’s life by either lending or giving it money.

Not long after the great banking bailout, banking executives were back to paying themselves giant bonuses. Taxpayers and shareholders were furious because many banks were still running at a loss and receiving help.

British newspapers referred to these executives as ‘fat cats.’

In 2013, banking bonuses rose by 29% globally, with executives in London benefiting the most.

All UK banks that year that made losses still managed to find billions of pounds for their executive fat cat bonuses.

NatWest Bank had to close hundreds of branches and fired many middle managers. However, despite its serious problems, its executives received generous bonuses.

In 2014, the European Commission proposed that shareholders should decide executive pay, rather than top executives. The commission said that there should be a stronger link between pay and performance.

Etymology is the study of the origin of words and terms and how their meanings have evolved.

The term ‘fat cat’ first appeared in the United States in the 1920s. It referred to rich people who donated money to politicians and political parties.

Frank Kent, a reporter for the Baltimore Sun, coined the term in his essay ‘Fat Cats and Free Rides.’

“A Fat Cat is a man of large means and no political experience who having reached middle age, and success in business, and finding no further thrill … of satisfaction in the mere piling up of more millions, develops a yearning for some sort of public honor and is willing to pay for it.”