What is first-mover advantage? Definition and examples

First mover advantage or FMA is a notion from game theory that the first to enter a market can obtain a massive advantage such as brand name recognition, customer loyalty, market share, etc.

The same applies for the first to introduce an innovation. The advantage is not just because the first company can erect barriers to entry, but also because competitors and rivals may be put off from committing the required resources to compete.

The term today is often referred to as technological leadership.

The main first-mover advantage is control of resources. With this edge over its competitors, the first-mover can be rewarded with considerable profit margins and a status of virtual monopoly.

In today’s Internet economy, first-mover advantage is instrumental in building market share. However, online marketers say this does not always mean that the first-mover makes a profit.

Being a first-mover is only worth it if the risks are outweighed by the rewards.

In some markets, the first-mover is rewarded with quasi-monopoly status and gigantic profits. In other industries, however, such rewards do not exist, and late-movers can move in and still compete effectively against the earlier entrants.

The world of business in some ways is very similar to animal survival. When a cheetah hunts down a gazelle, it is the first-mover and has a fantastic opportunity to eat to its heart content. However, if there are hyenas nearby, i.e. second-movers, they can grab the cheetah’s catch and enjoy all the benefits. Although the first-mover did all the work, the second-movers got the profits.

First-mover advantage is typically not just one single advantage, but rather a cluster of advantages that the innovating company gets by being the first one in.

Apart from engendering loyalty among existing customers, brand name recognition also attracts new customers, even after second-movers and later-movers have entered the market.

Economies of scale represent an advantage that is only really there for the first-mover. This is especially the case for manufacturers and makers of technology-based products.

The first-mover has a longer learning curve, during which it establishes more cost-efficient means of making a product and delivering it.

Another first-mover advantage is switching costs. As soon as the first mover sells something to a customer, he or she may be discouraged from switching to a rival product because of the cost. If a company purchases a Windows system for all its computers, it is unlikely to switch to another system rapidly.

The first-mover has a unique opportunity to build up relationships with suppliers, use a wider range of available website names, and recruit key workers.

According to MarketingTerms.com, first-mover advantage by definition is:

“A sometimes insurmountable advantage gained by the first significant company to move into a new market.” 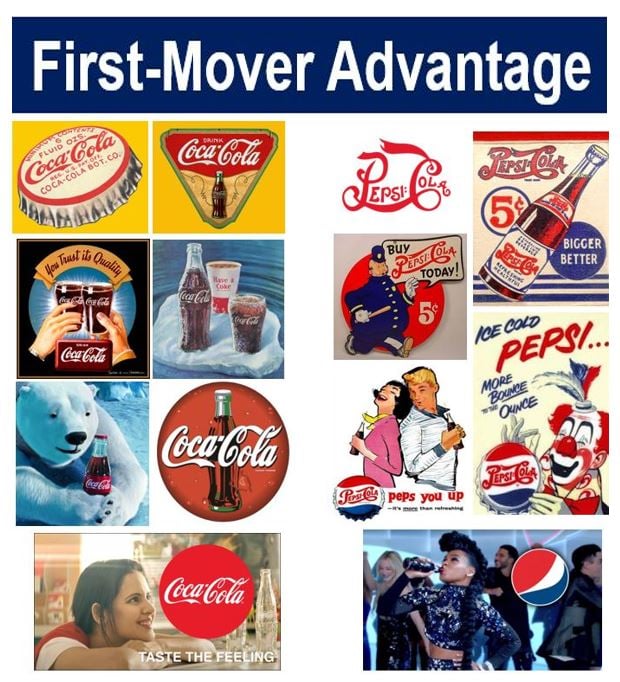 In the soft drinks war that started over one century ago, Coca-Cola was the first-mover – it started selling thirteen years before Pepsi. In part, thanks to this first-mover advantage, the Coca-Cola Company has always managed to be the dominant one.

As is the case in all business ventures where the potential for big profits exists, there are also significant risks.

The advantages of being the first mover are:

– The first mover can develop a huge competitive advantage through learning by doing – making it prohibitively difficult and expensive for other rivals to enter.

– Consumer behavior can be molded early on so that it becomes habitual. This places the company in a unique position.

The disadvantages of being the first mover are:

– Some of the first-mover’s employees may leave the company and compete against it with new challenge brands. There is a risk that the leavers take some of the intellectual capital with them.

– The failure rate for first-movers is high, i.e. it is a venture fraught with danger.

– Second-movers watch and learn, and are less likely to make the same mistakes that the first-mover made. 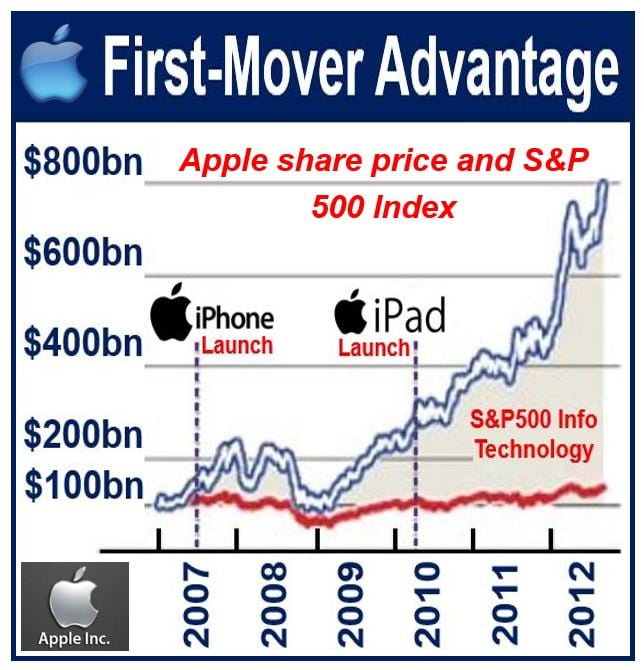 By being the first-mover in the smartphone and tablet markets, Apple Inc. saw its share price and S&P 500 Index rise. (Data: 4.bp.blogspot.com)

Some massive companies that sell products all over the world would not be where they are today had they not been first-movers.

Perhaps the best example of an ultra-successful first mover is the Coca-Cola Company (Coke). Coke was invented by John S. Pemberton in 1896.

When Caleb Bradham launched Pepsi-Cola thirteen years later, customers were already purchasing over one million gallons of Coke each year.

Over the past century, Pepsi has been trying to play catch-up with Coke, but Coca-Cola, the first-mover, has always had that edge. In 2014, the Coca-Cola brand was valued at $79 billion.

Other examples of successful first movers are e-commerce giant eBay, and Kleenex, the brand name for a variety of paper-based products such as facial tissue, which today belongs to Kimberly-Clark.

Amazon.com is a good example of a second-mover advantage company. Jeff Bezos founded Amazon.com in 1994 as an online bookstore – it was launched one year later. Product lines were rapidly expanded to include CDs, computer software, video games, toys, furniture, VHS, DVD, and some other items.

What many people don’t know is that Books.com (Books Stacks Unlimited) was launched in 1992. It was the very first online bookstore.

Amazon.com is today an S&P 100 company, and the largest online retailer in the United States. Book Stacks Unlimited was sold to Barnes and Noble.

In this EHow Finance video, business consultant Alexis Guerreros explains what the advantages and disadvantages are for first-movers.