What is graphene? Characteristics and uses

Graphene is the first truly 2D material we know of. It is just one atom thick, is incredibly light yet immensely tough, and is two hundred times stronger than steel. It is also a superb conductor of heat and electricity and acts as the perfect barrier. Not even helium can pass through it.

Apart from being incredibly hard and tough, it is also amazingly flexible. This is an extremely unusual feature for hard and tough materials.

Scientists have been talking about this one-atom-thick material – not always by that name – for the better part of a century. The idea was to take a diamond and slice it into one-atom-thick wafers. This would make it a 2D substance made entirely out of carbon – that is exactly what graphene is.

Being atomically tiny, it has potential uses in many sectors of the economy. People say it will completely transform how we make things and do business. For example, it will allow for tight packing of transistors in a processor. It will, therefore, help electronic industries take a giant leap forward.

First isolated from graphite in 2004, scientists say that graphene has literally hundreds of possibilities. We can use it to make light bulbs, there are applications in biological engineering, and electronics. We could also use it in filtration, aeronautical and space engineering, photovoltaics, and energy storage.

It is arranged in a tightly-packed layer of carbon atoms that are bonded together in a hexagonal honeycomb lattice. One square meter of graphene weighs only 77 milligrams or 0.0000271 oz.

It is the only form of carbon or solid material in which every single atom is available for chemical reaction from two sides – due to its two-dimensional structure.

Graphene is also the most light-absorbent material – weight-for-weight – that we know of. Imagine wallpaper all over the inside of your house that absorbs most of the light and heat and generates more electricity than you need.

Scientists say this type of wallpaper, which could mean tearing up your contract with your power company, may soon be a reality. (Left) Sir Andre Geim and Kostya Novoselov were awarded the 2010 Nobel Prize for Physics for isolating graphene in 2004. (Image: pubs.acs.org)

British scientists at the Advanced Technology Institute at the University of Surrey found that their graphene wallpaper could generate electricity even in very dimly-lit rooms. What may seem like a dark room for our eyes is still well lit-up as far as a moth is concerned.

The moth’s ability to seemingly ‘see in the dark’ inspired the researchers to adapt graphene to do the same thing.

One of the major problems regarding graphene production – the huge cost – may have been resolved when scientists at the University of Glasgow announced that they were able to make it 100 times more cheaply. Their discovery was hailed as the Holy Grail we had all been eagerly waiting for.

Economically-viable, mass-produced graphene could totally transform the face of many industries, including medical devices. Viable, in this context, means capable of making a profit for a long time.

Graphene and beyond: a revolution in two dimensions by… https://t.co/Zg3YRUyMJB

If we could utilize it to produce artificial skin, for example, it would significantly help provide sensory feedback for limb prostheses, which would dramatically change the quality of lives of millions of patients across the world – their artificial arms or legs would be nearly as dexterous or nimble as natural ones.

A spider’s web that could catch a falling plane

After spraying spiders with graphene, scientists from the University of Trento in Italy found that they produced a web so strong that it could catch a falling airplane without breaking.

We know that spider silk is the strongest natural material on Earth. Prof. Nicola Pugno and colleagues wondered what would happen if spider silk were combined with graphene – the world’s strongest artificial material. 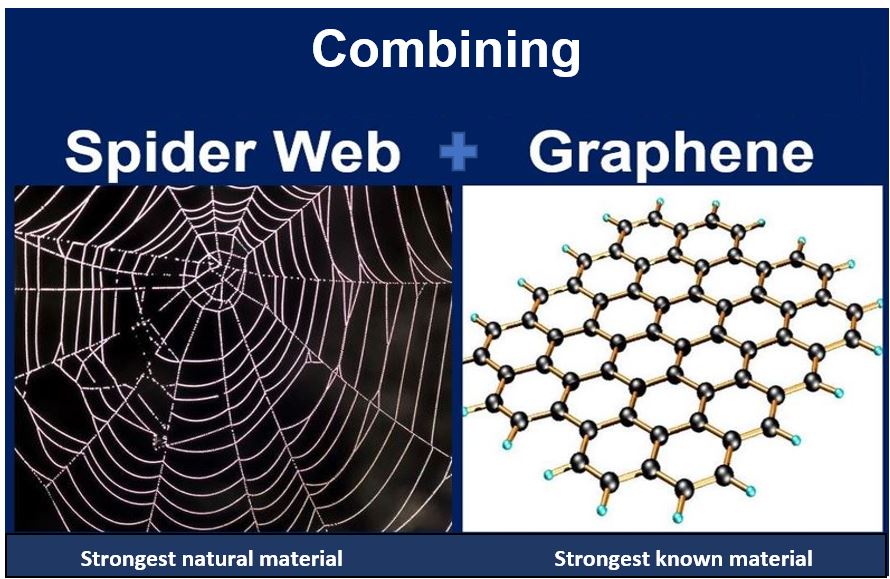 Combining the world’s toughest natural and artificial materials produced a spider web that could catch a falling aircraft.

Some of the spiders that had graphene sprayed on them produced webs up to 3.5 times stronger than normal ones.

How did it end up in the silk?

The researchers have yet to determine how the graphene and carbon nanotubes ended up in the silk – all they did was spray the stuff on the creatures. They suggest that spiders mop up materials around them and incorporate them into their spider silk.

Could this new discovery lead to airports that have a colony of special spiders on standby, ready to weave ultra-strong webs that can catch airplanes that are in trouble?

Prof. Pugno and colleagues say they plan to see how else they could produce mega-tough materials using graphene, such as spraying silkworms.

Graphene Lighting plc launched a lightbulb that was much cheaper to manufacture compared to current lightbulbs, had a longer lifetime and lower energy emissions.

Scientists say that the filament-shaped LED coated in graphene makes the lightbulb conduct electricity and heat much more effectively, making it superior to anything else on the market today. The graphene light bulb is longer lasting than any bulb currently on the market. It also consumes much less energy. (Image: University of Manchester)

Graphene Lighting plc is a spin-out based on a partnership between the University of Manchester in England and the National Graphene Institute.

“This lightbulb shows that graphene products are becoming a reality, just a little more than a decade after it was first isolated – a very short time in scientific terms.”

“This is just the start. Our partners are looking at a range of exciting applications, all of which started right here in Manchester. It is very exciting that the NGI has launched its first product despite barely opening its doors yet.”

An attractive material for nanoscale electronics

Graphene has come one step closer to being used commercially in the semiconductor market for usage in smartphones, tablet, laptops, desktops and other electronic technologies.

The ever-growing demand for faster and smaller semiconductor technology is a race that has probably reached its limit, scientists say, unless we can produce next-generation materials that work well at the nanoscale as alternatives to silicon.

Graphene is one of those materials. A new approach successfully produced long, flat, nanoscale ‘ribbons’ of this type of carbon.

A team of European researchers explained that graphene is attracting interest as a material suitable for use in nanoscale electronics not just because it is only one-atom thick, but also because it has some extremely useful, unique properties. For example, it can allow electrons and other charge carriers to move through it easily and incredibly rapidly.

However, some obstacles need to be overcome before graphene is anywhere near ready for use in industry as a semiconductor. A major challenge is how to manufacture it in required shapes and sizes.

One suggestion is to attempt to make long, structurally well-defined graphene nanoribbons, known as GNRs.

However, it is extremely difficult to produce what the scientists call ‘processable and longitudinally well-extended GNRs’ that are suitable for use in electronics.

Scientists from the University of Manchester used a ‘molecule toolbox’ to make ‘unprecedented longitudinal extensions of GNRs’ while at the same time not undermining their high structural definition.

Dr. Cinzia Casiraghi and fellow scientists used a range of techniques – including Raman spectroscopy – to confirm that all the GNRs were structurally well-defined and had super charge-carrier mobility.

The researchers say that Raman spectroscopy will play a major role in confirming the properties of graphene nanoribbons.

They hope that their approach will eventually lead the way to the successful production of a type of graphene that can be used across a range of electronic components.

“The GNRs produced with this method can allow development of graphene-based transistors, but they can also be used as active material in solar cells, chemical sensors and as novel energy storage material.”

“Because of the potential uses of this material, Raman spectroscopy is expected to play a crucial role in determining the optical and electronic properties of the ribbons.”