What is hysteresis? Definition and examples

As unemployed workers gradually lose the self-discipline, self-confidence and motivation required to get to the workplace and fulfill work duties, they remain in their jobless state, even when the economy recovers and vacancies increase in number.

In the advanced economy, this hysteresis may be compounded by the state benefits that unemployed people receive – if you are on the dole, it is easier to stay out of work. Hysteresis is the lag between cause and effect.

In economics, it is a situation which occurs when a historical event affects what happens in the future. Any disturbance in a country’s economy will lead to a trickle-down effect, and that problem will persist for a long time. This prolongation of the effect is known as the hysteresis effect.

‘Hysteresis’ used in many disciplines

The term is used in economics, engineering, chemistry and physics. For example, if you push something, it yields. But when you release it, it might not spring back completely or immediately. If it doesn’t it is exhibiting hysteresis.

In physics, the term is commonly applied to magnetic materials – a magnet may have several possible magnetic moments in a given magnetic field, depending on how the field changed in the past.

“The occurrence of hysteresis phenomena has been traditionally associated with mechanical and magnetic properties of materials. However, recent studies on the dynamics of biological processes suggest switch-like behavior that could be described by mathematical models of hysteresis.” 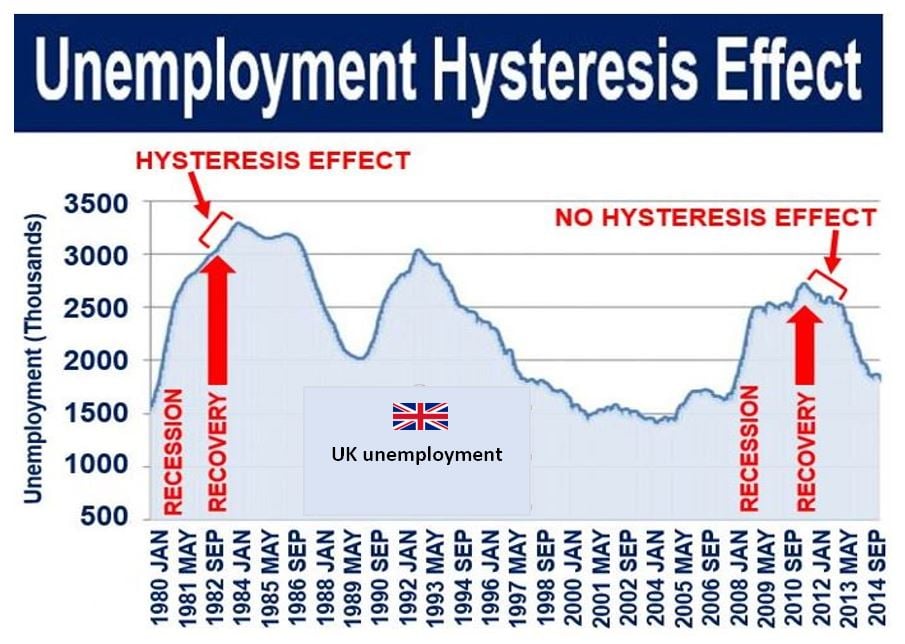 After the recession at the beginning of the 1980s, unemployment soared to over 3 million. However, unemployment continued rising for many years after the recovery started – there was a hysteresis effect. During the fairly weak recovery after the 2008 recession, unemployment declined much sooner. This time, the UK labor market was significantly more flexible. There was low-wage growth and more part-time and temporary employment, as well as self-employed people. (Image: adapted from economicshelp.org)

According to the Online Etymology Dictionary, the word with the meaning ‘a lagging of one or two related phenomenon behind the other’ – first emerged in the English language in Britain in 1881.

Etymology is the study of the origin of words. A person who is specialized in etymology is an etymologist.

The term was coined around 1890 by Sir James Alfred Ewing (1855-1935), a Scottish physicist and engineer, best known for his work on the magnetic properties of metals.

Export performance is subject to delay in cause and effect. Due to the fixed transportation costs, it may take a while, – or a big push – to boost a country’s exports. However, as soon as the transition is made, exports continue strong due to their own impetus.

Imagine you are on the starship Enterprise, the fictitious spaceship in the science fiction series Star Trek. You and your crew have just identified an intruder – a dangerous alien creature that you know eats human beings. You coax it to the airlock and then eject it into space – effectively killing it.

The alien, like humans and other animals from Earth, needs to breathe air to stay alive. But now it is in the dead of space.

However, it does not die immediately, but after about one or two minutes. The lag between the ejection and death is hysteresis – the ejection is the cause, while death is the effect. Hysteresis is the delay (lag) between cause and effect.

In this video we see a job seeker who goes for dozens of job interviews. It becomes clear that she has suffered the lasting effects of an economic downturn – she has become unemployable because her skills and self-confidence have deteriorated so much.