What is imperfect competition? Definition and examples

Imperfect competition exists in a competitive market, but where some of its features or sectors are not truly completely competitive. Imperfect competition is where there might be many producers and sellers, however, they are selling dissimilar goods and services. In an imperfect market, the ones who call the shots are often in a position to abuse their power.

Imagine an economy that has 1,000 different companies – on paper it appears to have a very competitive market. However, it would soon look less like a perfect and more like an imperfect market if among those one thousand companies you discovered that there was just one electricity producer and seller, one company that owned all the filling stations, two landline telephone companies, two providers of mobile phone services, one bus company, one airline, one water company, and two distributors of milk, etc.

It would still be classed as a competitive market, especially if none of the companies were state-owned, and many sectors did have several competitors and rivals. However, as the name suggest, it would be imperfect in nature – overall, there would be imperfect competition. 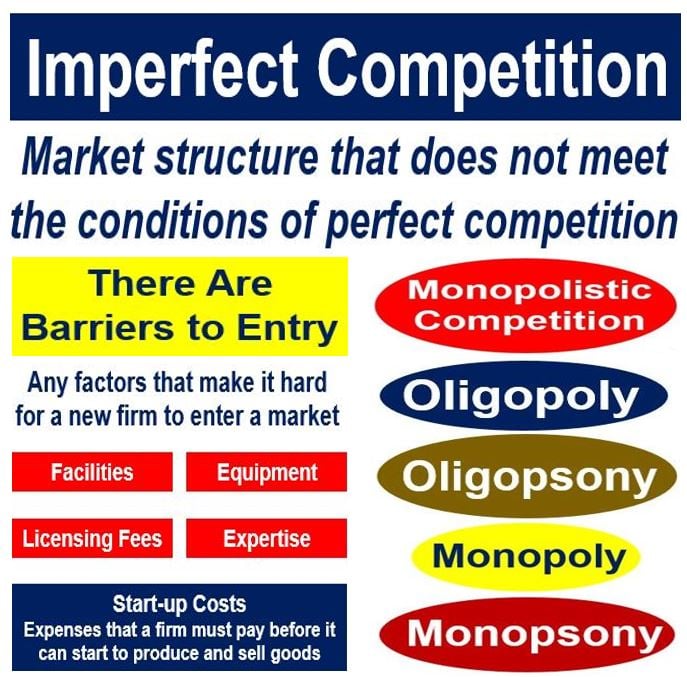 Imperfect competition exists in every country in the world. It is something we have had to learn to live with. Some industries and sellers today enjoy the luxury of influencing the price in order to make more money.

According to the Financial Times’ glossary of business terms, imperfect competition is:

An Oligopoly is a market that is dominated by very few producers. The players are known as oligopolists. Sometimes, a market ends up an oligopoly because the main players collude to reduce competition, raise barriers of entry, and manipulate prices.

In most oligopolies, each oligopolist is aware of what every competitor is doing, because there are very few of them to monitor.

In this market there are only two competitors – it is a duopoly. They both conspired to get rid of all competitors and raise the barriers to entry so that newcomers would find it extremely difficult to get in. In this image, the main barrier to entry is the table, which they have deliberately made too high for everyone else.

Monopolistic competition exists in a market where there are many producers that sell products which are differentiated from one another – they are not perfect substitutes.

In other words, there are many competitors, but each one makes and sells a slightly different product.

In many markets, such as toilet paper, smartphones and toothpastes, producers practice differentiation by changing their product’s physical composition, using special packaging, or simply making the claim that they have superior goods based on advertising and brand images.

Restaurants are all chasing the same type of customer – one who wants to come in and eat. However, each restaurant offers something different and claims to have an element of uniqueness.

A market where there is just one producer/seller of a product or service is a monopoly. In a monopoly the entry of new competitors is either prevented or highly restricted.

The monopolistic company typically keeps its price high and restricts output. Compared to markets where there is perfect competition, the lone producer shows very little or no interest in the needs and preferences of consumers.

If a monopoly exists in an important sector of the economy, one which is virtually impossible for consumers to avoid, such as utilities or public transport, governments try to oversee and control the company by imposing price controls, forcing it to break up into two competing businesses, or nationalization (taking over ownership).

In some of the world’s smaller economies, governments actually encourage a monopoly to form in a strategic industry for reasons of national security, and to achieve economies of scale so that it can compete internationally. This is often the case with utilities.

In this era of globalization, complete monopolies are much rarer than they used to be. They only truly exist in countries where the law clearly bans competitors from entering the market.

In Mexico, every single filling station is a PEMEX (Petroleos Mexicanos) one, and all electricity is generated and sold by CFE (Comisión Federal de Electricidad). According to lawyers in Mexico, installing solar panels on your roof and generating electricity from them is illegal – CFE is the only entity authorized to generate electricity in the country.

This is a back-to-front monopoly. There are several producers and sellers, but just one buyer. Monopsony also refers to the job market – when one major company or organization is by far the largest employer in a town.

That company has monopsony power in the labor market, and if the government does not intervene, it can push wages, workers’ rights and working conditions down to a bare minimum.

The defense industry in the United States, for example, is a market monopsony. The Department of Defense represents virtually all domestic sales of the country’s largest defense companies.

Lockheed Martin, based in Bethesda, Maryland, USA, a defense giant that employs more than 120,000 workers, is as big as it is thanks to the US Department of Defense – by far its largest client.

When there are many sellers but very few buyers – like a monopsony, but with more than one buyer. In this market, the buyers call the shots – it is a buyer’s market. Buyers can play off one supplier against another, thus significantly reducing their costs.

They can dictate terms – product specifications, quality, and delivery schedules – and the suppliers have to comply.

In the United States, Altria, Brown & Williamson and Lorillard Tobacco Company buy nearly 90% of all tobacco produced in the country. American tobacco growers live in an oligopsony.

Today, large supermarket chains have dramatically increased their influence over suppliers – they tell them what food to grow, how to process things, how goods should be packaged, and at what price to deliver them.

In Australia, Woolworths and Coles control 70% of the country’s food market.

Non-price competition – marketing strategies that do not involve altering the price of a product or service – is more common in marketplaces where there is imperfect competition.

In oligopolies, the market leaders give the impression that they are involved in a bitter rivalry, when in fact they have probably colluded to keep their prices artificially high.