An oligopoly is a market sector in which very few firms compete or dominate. It is a highly concentrated market. It does not mean there are just two, three or four competitors. In fact, there could be dozens of them. However, there are only a few dominant ones.

For example, let’s suppose a market has fifty competitors. However, the top three dominate 90% of the market. That market is an oligopoly.

Do not confuse the term with oligopsony, which is a market with few buyers and many sellers.

The dominant players in an oligopoly often work together. In other words, they collude. They collude as if they were a single monopoly, and try to fix minimum prices. They also try to fix output volumes and other terms of business.

Sometimes, the oligopolists opt for non-price competition – where their prices stay the same, and they compete using other factors. Perhaps they compete in packaging, customer service, or special delivery options. In these cases, their aim is to avoid a cut-throat price war.

Companies in oligopolies frequently collude in an attempt to stabilize a market that is unstable. Thyy do this to minimize the risks inherent in these markets for product development and investment. In most countries, there are legal restrictions on such collusion.

For a firm to be colluding illegally, the authorities must catch it communicating with a rival. In many cases, there is no formal or observable collusion taking place.

According to the Financial Times Lexicon, an oligopoly is:

“When supply of a particular product is dominated by a few companies, which are therefore able to control prices and output – though they would normally have to take each other’s decisions into account.”

Sometimes, a market becomes an oligopoly because the dominant players collude to minimize competition. For example, they manipulate prices and raise barriers to entry. 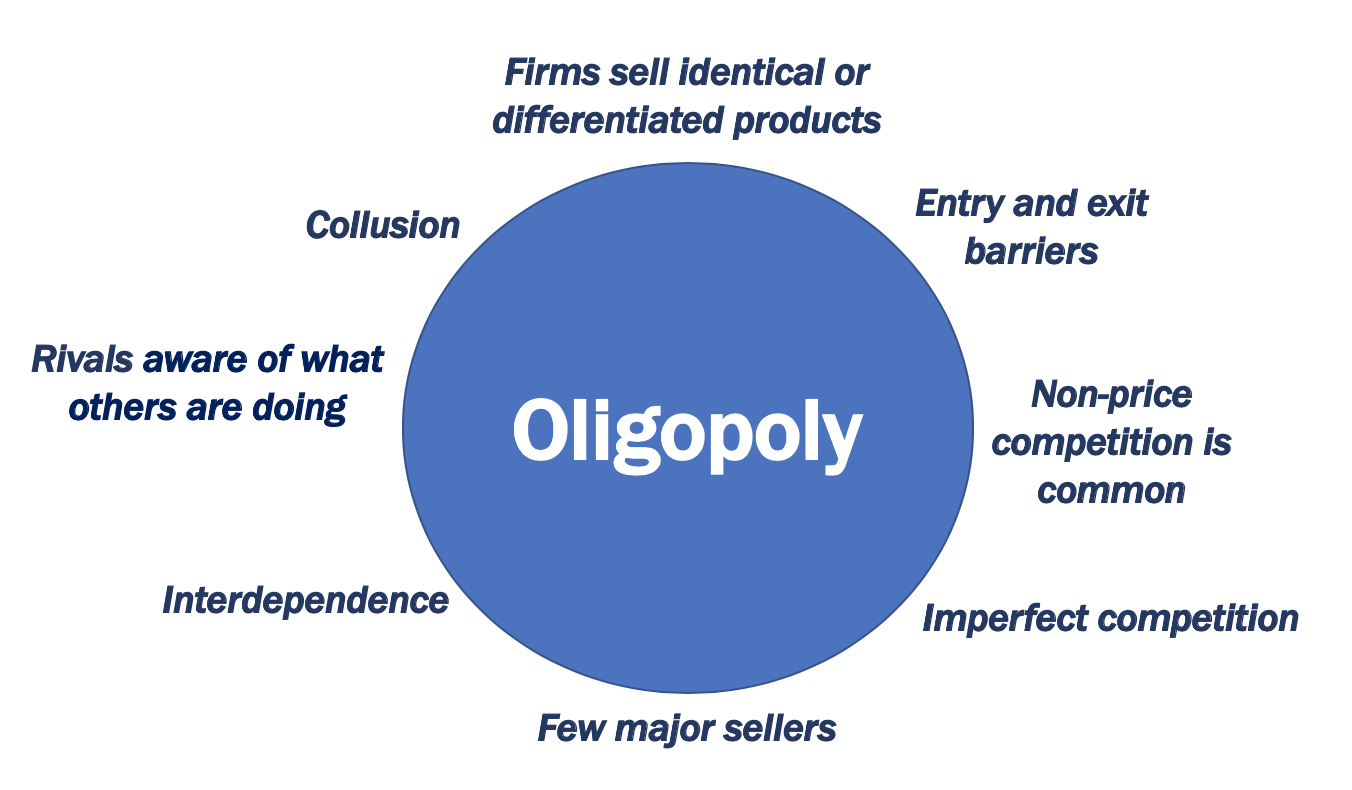 In the majority of oligopolies, each dominant rival is aware of what every player is doing. They are aware because there are so few of them. Therefore, keeping an eye on each other is relatively easy.

Game theory states that the decisions of one major player in an oligopoly influences all the others’ decisions. It also works the other way round.

When an oligopolist is considering planning and strategy, it must take into account how its rivals are likely to respond.

At the time of writing this article, these are some of the most well known oligopolies in the US and UK:

Oligopolies do not exist just within countries, but also in whole continents and across the globe.

In the smartphone and tablet markets, Google Android and Apple iOS together have more than 90% global market share.

Regarding the HHI scores and how US agencies rate them, the Department of Justice says: