What is inequality? Definition and meaning

Inequality or economic inequality refers to the difference between the rich and poor, the have and have-nots – it is shown by people’s different positions within the economic distribution – wealth, pay and income. Inequality is large in a society where few people own a disproportionate amount of the economic pie.

Inequality studies may also examine the difference between various socioeconomic groups in society, such as working class and poor households versus people with a university degree, or men versus women.

The term refers to the unfair situation in society where some individuals have considerably more money, access to education, opportunities, etc. than others.

For as long as anybody can remember, economists have been debating whether economic growth creates less or more equality, and whether equal societies grow more or less slowly than unequal ones.

“The unfair situation in society when some people have more opportunities, money, etc. than other people.

The Economist says that one of the problems is to agree which type of inequality matters the most – equality of income (outcome) or of opportunity. Then there is the problem of measuring it.

According to equalitytrust.org.uk, there are three main kinds of inequality – income, pay and wealth:

Income Inequality: refers to how unevenly income is distributed in society.

Income is not the same as pay. Income includes all the money people receive from employment – wages, bonuses, salaries, etc. – plus investments, state benefits, rent, and pensions.

Economists and sociologists may measure income on a household or individual basis. Gross income is what we receive before tax, while net income is what we are left with after taxes and insurance contributions have been paid.

Income distribution looks at the incomes of different socioeconomic groups in a country, industry, or company. 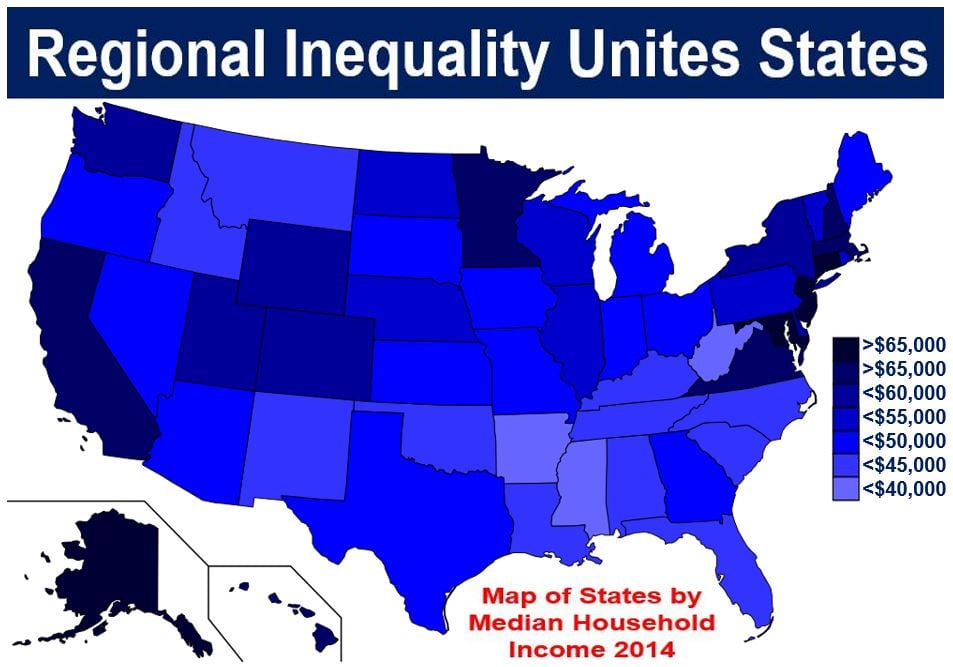 The median household income in the richest US states was more than 50% greater than in the poorest states in 2014. (Image: Wikipedia)

Pay Inequality: refers just to payment from employment, and includes bonuses and overtime. It can be based per hour, per month or per year.

The pay gap is the difference in pay between one group of people and another, either within one company or across a whole city, region or nation.

Wealth Inequality: all our assets, everything we possess, is our wealth. A person’s or household’s wealth includes all their financial assets, such as stocks or bonds, private pension rights, property, etc.

Studies have shown that extreme poverty slows economic growth more severely than income inequality itself. Extremely poor people are unable to receive or buy the education required to enable them to raise their standard of living. Very poor people’s children typically have to miss school in order to earn money.

In the majority of cases throughout history and across the world, economic growth has generally helped make people more equal, mainly due to redistributive tax and benefits systems.

However, tax and benefits can reach a point in which they sap GDP (gross domestic product) growth.

Some economists believe that high taxes discourage people from working as hard as they might have done in a lower-tax system, while generous benefits encourage unemployed individuals to either not bother to seek work or look for a better job.

Over the past couple of decades however, economic growth in the advanced economies has occurred alongside a widening wealth gap – the rich are getting richer at a faster rate than the rest of society.

The Organization for Economic Co-operation and Development (OECD) carried out a study which concluded that the GDPs of countries with shrinking inequality on average grew at a faster rate than those where the income and wealth gaps were expanding.

If nations across the globe made a greater effort to reduce the income and wealth gap, the GDP of the world would be boosted considerably.

In its report – Trends in Income Inequality and its Impact on Economic Growth – the authors wrote that the single largest obstacle to economic growth is the ever-growing income gap between the lower-middle class and poor households versus the rest of society.

The main factor behind the wealth gap undermining growth is poorer people’s lack of investment in education, the report authors added.

“This compelling evidence proves that addressing high and growing inequality is critical to promote strong and sustained growth and needs to be at the center of the policy debate. Countries that promote equal opportunity for all from an early age are those that will grow and prosper.”

Even the so-called enlightened economies of the Scandinavian countries experienced widening wealth gaps over the same period, which undermined growth. 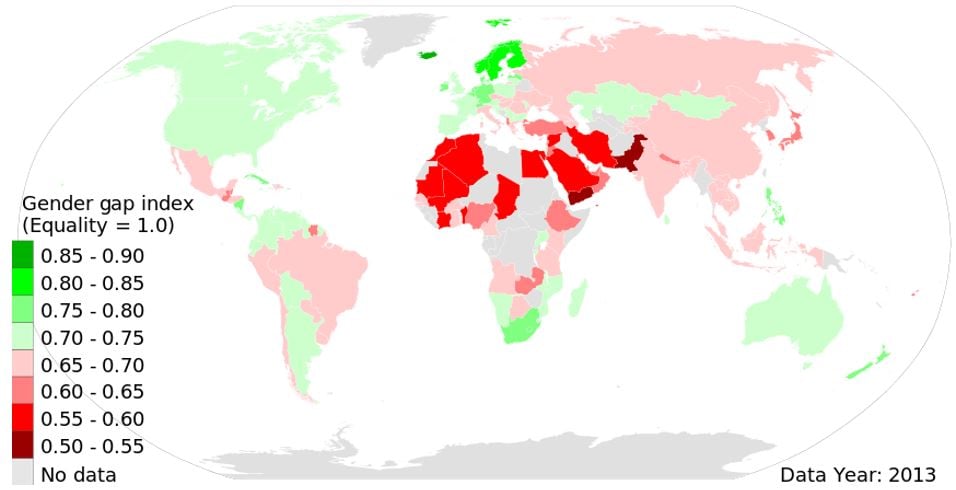 Gender inequality results from the persistent discrimination of one group of people based upon their gender. It is also considered a causal factor of violence against women. Male chauvinists are against gender equality. Gender discrimination against women is an entrenched, global pandemic – in some parts of the world it is used as a tool of war. (Image: Wikipedia)

Inequality in the United States

A Harris Poll conducted in 2014 involving 2,234 adults revealed that the majority of Americans think their country’s economic inequality is a major problem.

As expected, the survey found a link between household income and people’s perception of America’s inequality problem. More households earning less than $75,000 per year saw it as a major problem compared to those earning $100,000 or more.

Below is a list of households according to income and what percentage of them saw inequality as a major problem:

Seventy-two percent of interviewees said the problem was a political one, while 59% said it was a moral one.

Sixty-six percent of Americans say that their government should introduce policies that address the wealth gap across the country – forty percent say that it is a matter of urgency.

Regional inequality in the United Kingdom

Andrew Haldane, the Bank of England’s Chief Economist, warned in December 2016 that regional inequality in the UK is “one of the most important issues that we face today as a country.”

Haldane said: “The UK, I think, is towards the bottom of the league table within Europe in terms of its degree of difference across regions.”

London and the South East are the only regions of the country where income per head is greater than it was before the 2007/8 global financial crisis. In the North East of England and some other areas, net wealth has declined.

“And the signs of those gaps having shrunk over the past few years? Well, there is not much evidence to speak to that. If anything these gaps – which are of long standing – have nudged a little wider over the course of the UK’s recovery.”

“If you look at the level of income within region, per head, it is only really London and the South East where that is back above the levels it was before the crisis. In pretty much every other area of the UK we are yet to move materially back to those pre-crisis levels.”

“I think [the issue of regional inequality] is right up there as among the most important issues that we face today as a country.”

Within the next couple of centuries, humans and advanced robots will merge and become incredibly powerful, everlasting God-like cyborgs, says Professor Yuval Noah Harari, from the Hebrew University in Jerusalem. However, this unimaginable power will only be enjoyed by the very rich.

Prof. Harari thinks the merger of humans with machines will be the ‘biggest evolution of biology’ after life first appeared on Earth approximately four billion years ago.

We are, by nature, always dissatisfied with what we have. Those of us who can afford it will succumb to the temptation of undergoing either genetic engineering or technological upgrades. The cyborg-like humans of the future will probably be as different from modern humans as we are from chimps and gorillas – our fellow primates.

“I think it is likely in the next 200 years or so homo sapiens will upgrade themselves into some idea of a divine being, either through biological manipulation or genetic engineering of by the creation of cyborgs, part organic part non-organic.”

Inequality will be much greater than it is today, he warns. The cyborg technology of the future will be extremely expensive, and only very wealthy individuals will be able to afford it.

Our society will become divided not only as far as wealth is concerned. Lifespans will be vastly different, with some living virtually forever while the rest of the populations die within perhaps one hundred years.

This Market Business News video explains what inequality is: