The informal sector, also known as the underground economy, black economy, shadow economy, or gray economy, is part of a country’s economy that is not recognized as normal income sources. People who work in the informal sector do not declare their income and pay no taxes on them. The term includes illegal activities, such as drug pushing and smuggling. It also includes cleaning car windshields at traffic lights or doing construction work, i.e., legal work.

This sector includes situations where people must work without receiving any pay. It also includes sectors in which individuals work and in exchange receive something other than money.

Unlike the formal economy, economists do not include the informal sector’s components in GDP computations. This means that countries are probably richer than official statistics suggest. GDP stands for gross domestic product. 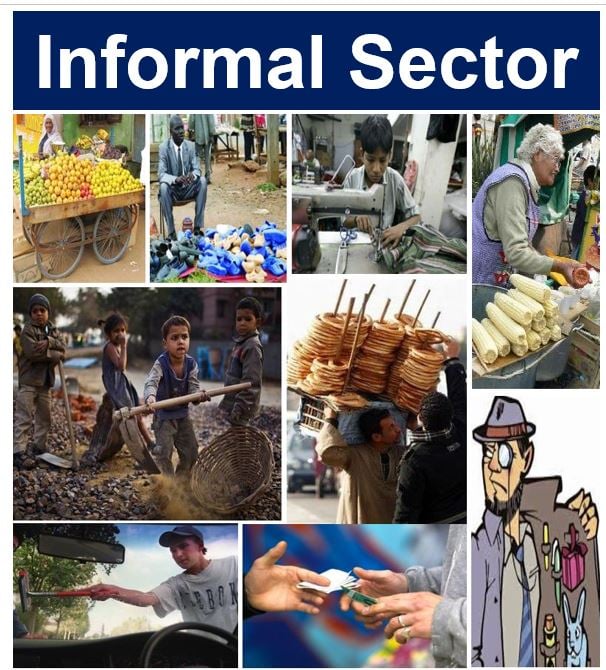 According to the OECD, people who work in the informal sector “typically operate at a low level of organization, with little or no division between labor and capital as factors of production and on a small scale. Labor relations – where they exist – are based mostly on casual employment, kinship or personal and social relations rather than contractual arrangements with formal guarantees.”

The informal sector represents a significant part of the economies of most countries in the world, especially developing nations.

In the advanced economies, between 10% and 20% of income comes from the shadow economy. In some emerging countries, it can represent more than fifty percent.

Even though the informal sector represents a major part of most developing nations’ economies, it is typically stigmatized. Critics say it is unmanageable and also extremely troublesome.

It provides vital economic opportunities for those at the bottom of the socioeconomic ladder. It has been growing considerably since the 1960s.

Most emerging economy governments are currently trying to integrate the shadow economy into the formal sector.

Sir William Arthur Lewis (1915-1991) first used the term ‘informal sector. He was an economist from Saint Lucia who was awarded the Nobel Memorial Prize in Economics in 1979. He was describing work that fell outside of the modern industrial sector, i.e., outside the formal economy. 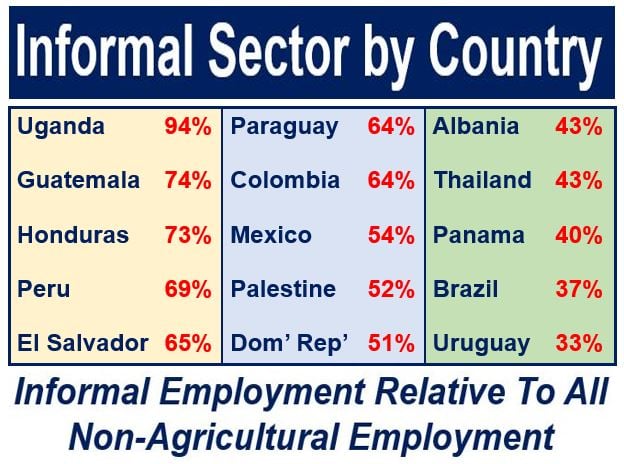 The informal sector is much greater in developing nations. Operators in the formal economy say unregistered players are a source of unfair competition. According to The World Bank, informal employment “…deprives governments of potential tax revenue and diminishes a government’s capacity for regulatory oversight.” (Data source: worldatlas.com)

Those who work in the informal sector have no employment security, workplace safety, or social security. The term also includes those who deliberately do not declare their income and evade paying taxes.

A child who is forced to work in a sweatshop fourteen hours per day works in the informal economy. So does an adult who mowed somebody’s lawn, got $40, never declared it, and paid no income tax.

The informal sector also includes forms of shelter or living arrangements that are illegal, unregulated or not afforded state protection. For this definition, the term ‘informal economy’ is more common.

People who are against the free market system commonly claim that the informal sector is one of the ills of advanced capitalism.

This view is naïve, because in regressive regimes, such as those of Cuba, North Korea, and the old Soviet Union – all communist (left wing) economies – the informal sector, known as the black market, is massive and represents a key and vital part of their economies.

The informal economy thrives when the government restricts an economic activity or slaps very high taxation on certain products.

During the prohibition of 1920 to 1933, the sale of alcoholic beverages in the United States was illegal, and the black market in that sector was enormous.

In the United Kingdom today, taxes are extremely high on cigarettes. The tobacco black market in Britain is big business and employs thousands of people.

However, this does not mean that all informal sector activities are criminal. A teenager selling cigarettes and chewing gum at the traffic lights in downtown Mexico City is working in the informal sector, but his activity is not criminal. 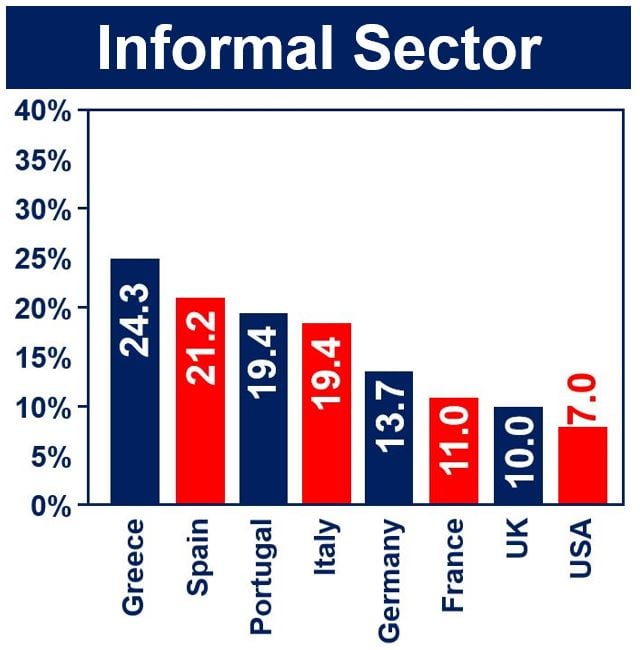 Percentage of Total GDP: In southern Europe, the informal sector represents a much larger proportion of GDP than in northern Europe. The USA’s percentage is relatively low.

The informal sector generally has the following features:

The informal sector covers a wide range of activities that combine two main groups, whose reasons for being in it are quite different:

They want to avoid labor regulations and other institutional or government regulations. They do not want to register their business or pay tax. Some of these activities are criminal.

The informal sector plays a controversial and important role. It provides jobs, reduces unemployment and underemployment, and probably helps combat malnutrition in many parts of the world.

However, it is typically low-paid, and job security is non-existent.

Even though it bolsters entrepreneurial activity, it does so to the detriment of regulation compliance, particularly labor and tax regulations.

Its role in most countries increases during a recession and declines when the economy is healthy and growing. 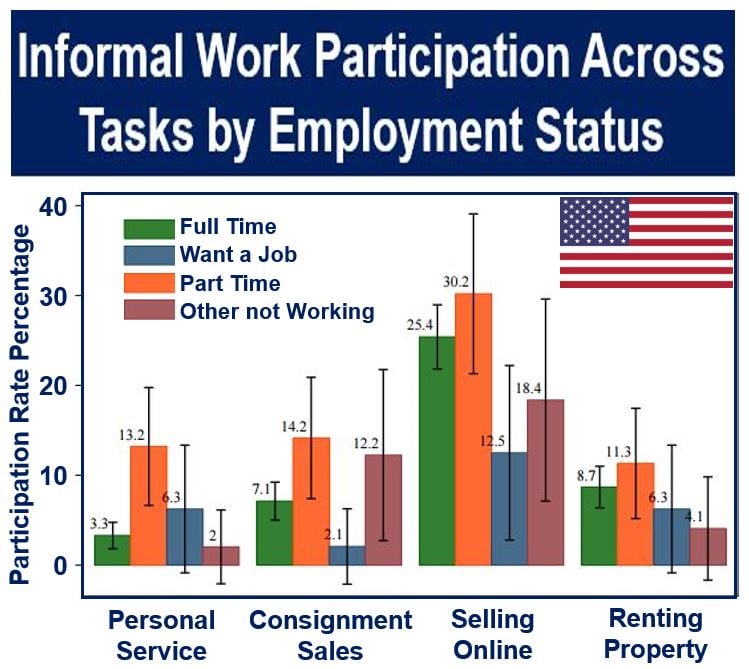 Many online salespeople in the United States work in the informal economy. (Image: Adapted from Federal Reserve Bank of Boston)

There have been dozens of estimates regarding the informal economy in the United States. Their findings vary considerably. Some have not included criminal activity in their figures, while others have.

Friedrich Schneider, Professor of Economics at Johannes Kepler University of Linz, Austria, carried out a deep study of the informal economy across the world.

Prof. Schneider estimated that it represented 7.2% of US GDP in 2007. His study did not include criminal activity such as hacking for organized crime, drug dealing, smuggling, gun selling, etc.

In the rich countries, the informal economy reached a peak in 1999, after which it shrank annually for many years, Prof. Schneider found.

However, since the global financial crisis of 2007/8, it has been growing again.

The Federal Reserve Bank of St. Louis says that it is extremely difficult to measure the informal sector accurately. It uses several approaches to gather data, including surveys, tax audits, and other compliance records. It also examines discrepancies between the official and actual labor force, national expenditure, income statistics, and even electricity consumption.

“The difference between the growth of electricity consumption and official GDP is then attributed to the growth of the informal economy.”

The state of California has America’s largest GDP – in fact, it is the world’s eighth biggest economy. Inequality.org says that from 15% to 17% of the state’s labor force works in the informal economy. It generates between $60 billion and $140 billion annually.

If that sector were in the formal economy, California would have between $8.5 billion and $28 billion more in collected taxes.

“Those who toil in the underground economy generally perform un- or semi-skilled labor, often with little opportunity for advancement, at significantly lower wages than those formally employed.”

“Moreover, they often rely on public assistance, in the form of food stamps and emergency room medical care, to subsidize this lesser pay. In many instances, workers receive wages for only a portion of the hours they worked in a given week, while others are paid on a piece rate basis—as low as $15 for a 10-hour workday hanging drywall.” 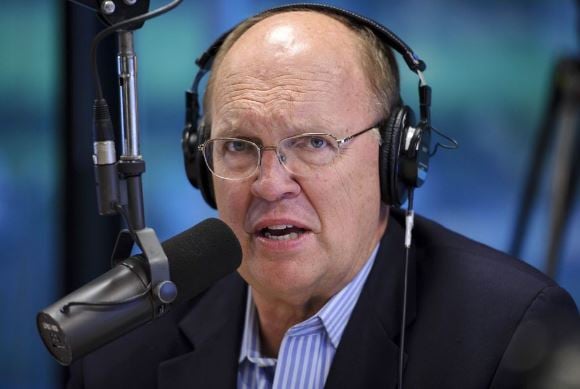 Neal A Boortz, an American author, attorney, and former Libertarian radio host, once said: “The underground economy. Our present complex tax code allows—even encourages—people to go ‘under the radar.’ How bad is this problem? Well, estimates are that the underground economy—those dealing in illegal or illicit behavior such as drugs or other off-the-books labor—amounts to between $1.5 trillion and $3 trillion per year.” (Image: wsbradio.com)

The shadow economy in the United Kingdom was worth approximately £150 billion annually in 2012, economists Friedrich Schneider and Colin Williams, from the Institute for Economic Affairs, reported after carrying out a study.

The authors said that Britain’s informal sector represents 10% of GDP. This is smaller than in most rich nations. In Italy, Greece, and Spain it represents at least 20%.

The underground economy represents an average of 13.4% of the GDP of the 34 developed nations in the OECD. OECD stands for the Organization for Economic Cooperation and Development.

“A reduction in the tax burden is therefore likely to lead to a reduction in the size of the shadow economy. Indeed, a virtuous circle can be created of lower tax rates, less shadow work, higher tax morale, a higher tax take and the opportunity for lower rates. Of course, a vicious circle in the other direction can also be created.”

“Given this relationship, the high level of non-wage costs (averaging 39% of total labor costs) and the penalty on individuals who move from earning one third to two thirds of the median wage (averaging 58% of the increase in earnings for a one-earner couple) in the European Union should be a matter of real concern.”

“The latter figure is 79% in the UK and thus low-paid UK workers have a huge incentive to supplement their incomes in the shadow economy.”

The Canada Revenue Agency estimates that from 1992 to 2012, its informal sector did not expand as fast as GDP. Over the past decade, its share of the official GDP has remained stable. Total ‘underground activity’ in 2012 was about $42.4 billion, or 2.3% of GDP.

The study showed that while the informal sector exists in most industries, it is particularly prevalent in sectors where purchasers use cash to pay for goods and services.

“From a provincial-territorial perspective, the total value of underground activity was the highest in the four largest economies: Ontario, Quebec, British Columbia, and Alberta.”

“Overall, the study provides encouraging signs that the underground economy is growing at a slower pace than the Canadian economy. However, any underground economy activity undermines the integrity of the tax system and impedes the ability of governments to protect the revenue base and keep taxes low.”