What is interest rate? Definition and meaning

Interest rate may refer to the annual cost of credit or the annual percentage growth of a savings account. It may also be the rates a central bank sets. Specifically, rates against which other banks in the country can lend to each other. When you borrow money from a bank, you will have to pay back the principal plus interest. How much interest depends on the lender’s interest rate. It also depends on how long you take to pay back all the money.

The term ‘principal’ in this context, means the original amount the borrower borrowed, i.e., before adding on the interest.

Banks can determine their own interest rates on loans and savings. However, financial institutions follow the movements of central bank rates closely. Therefore, most bank rates are quite similar. 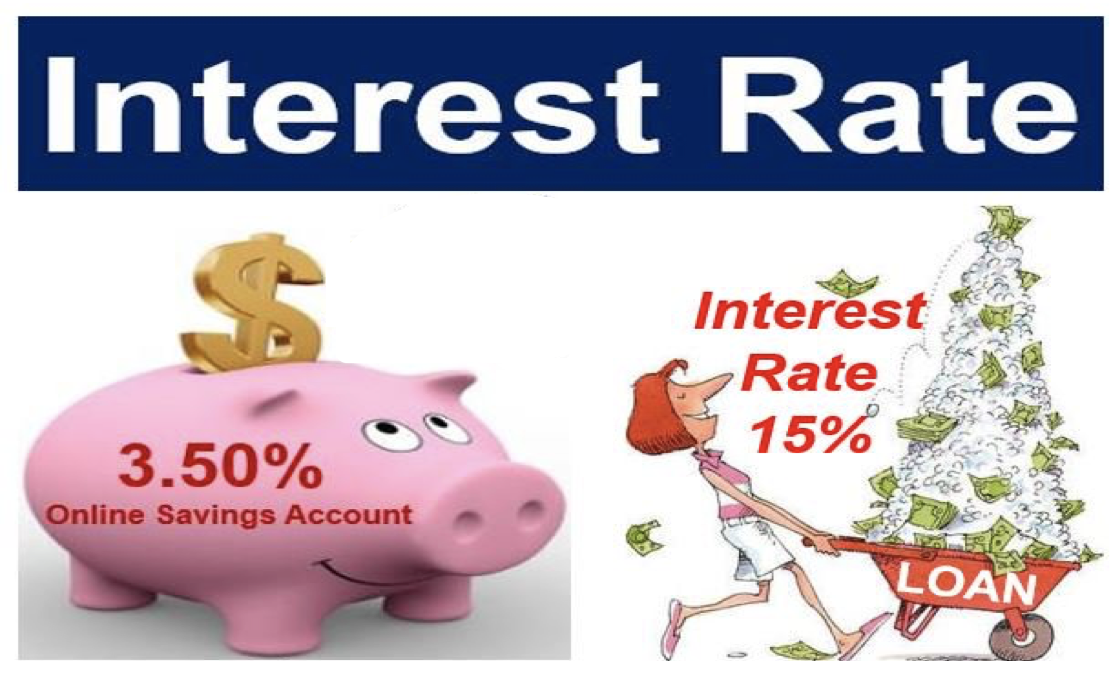 If you want to borrow money, go to a reputable bank. A reputable bank will charge you a much more reasonable rate than a loan shark. All banks charge higher interest rates on their loans than they pay out to savers. That is how they make a profit.

Usury refers to charging an exorbitant interest rate. In some religions, it is a sin to charge interest on loans, no matter how small. When London-based lender Wonga was charging an APR of 5,853%, the FCA made the company pay redress. The FCA said Wonga was guilty of unfair debt collection practices.

Most lenders express interest rate on an annual basis. We call this the APR (annual percentage rate). APR comprises the interest rate plus any arrangement fees that the lender adds to the loan.

Some agreements do not mention interest rates although there is one. We know there is one because the borrower pays back more than the principal. In such cases, we say that there is an implicit interest rate.

In most cases, a low-risk borrower will pay a lower interest rate than a high-risk one.

The interest rates that borrowers pay and savers receive are closely linked to what the central bank sets.

Trying to cool the economy

When inflation appears to be increasing, the Fed and other central banks work to reduce the money supply. They do this because they want to halt inflation.

When the economy is waning and unemployment is growing, central banks expand the money supply. They do this because they want to encourage consumers spending and corporate investment.

The control of the money supply occurs through interest rate manipulation by the central bank. In other words, it either raises or reduces interest rates.

Manipulating interest rates does not always work as the central bank had planned. However, for the most part, it is a very effective tool.

When the central bank reduces interest rates, we say it has adopted an ‘easy monetary policy.’

The stock market also suffers when interest rates go up. It suffers because investors get a better return from bonds or bank deposits, so they shift away from shares.

Interest rate on a loan

When we borrow money, we have to pay back the principal, i.e., the original amount. We also have to pay interest. Imagine that Fred Jones borrows $1,000 from his bank.

The total amount will be more than $1,100 if Fred borrows the money for longer than one year. Contrastingly, it will be less if he pays it back in less than a year.

Over the past two hundred years, interest rates have varied considerably. Central banks or national governments have set the rates.

The Central Bank of Zimbabwe raised interest rates for borrowing to 800%. Despite this drastic action, its attempt to tackle spiraling hyperinflation failed miserably.

The Bank of England has been setting interest rates since 1694. It has one of the world’s most complete economic datasets regarding central bank interest rate manipulation.

Below is a list of some interest rates throughout history (Source: Business Insider):

This Money and Society video explains the basics of interest rates and how they work.