What is intrinsic value? Definition and examples

Intrinsic value is what a security or company is actually worth, really worth, rather than its book value or market price. Intrinsic value takes into account a number of variables including trademarks, copyrights, the quality of the directors, the business climate, and brand name – features that are not easy to calculate and are not generally reflected accurately in the market price.

Intrinsic value, often called fundamental value, also refers to the value of an option, product, property or currency – it is determined through fundamental analysis with no reference to its market value.

One could say that the intrinsic value of a company is what it is really worth – its real value – while market capitalization is what investors on paper are willing to pay for the business – its price. 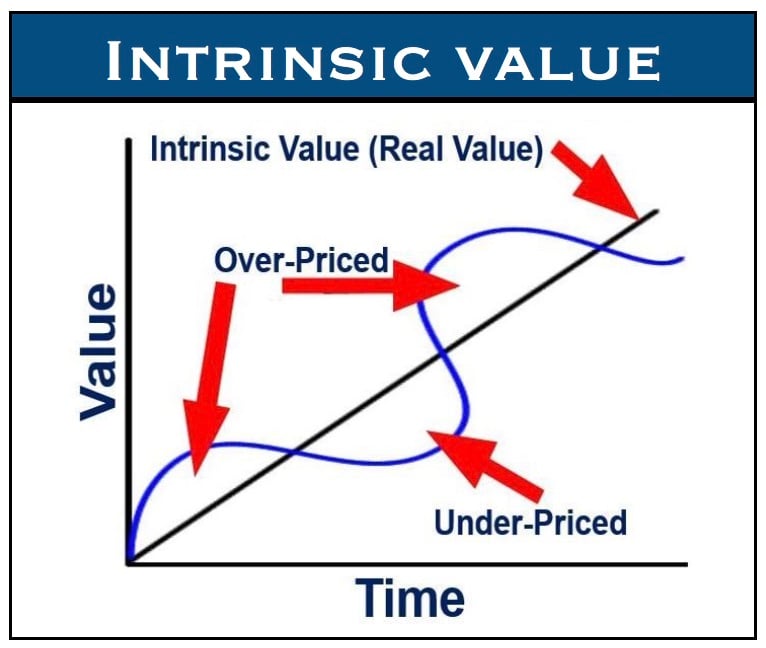 Calculating the intrinsic value of a company is not an exact science. It is an estimation or projection on the future value of its stock price based on business historical performance. Several factors determine a firm’s intrinsic value, including its performance, business trend, economic conditions in the region, country and the world, its financial condition, and the quality of its CEO and Board of Directors.

It is generally calculated by summing the discounted future income an asset will bring to obtain the present value. Experts point out that the term may have different meanings for different assets.

Value investors use a number of different analytical techniques to estimate the intrinsic value of securities – this way they hope to find securities where the true value of the investment is greater than its current market value.

Value investors who follow *fundamental analysis look at two aspects: 1. The business model, market factors, governance, target etc. – the qualitative aspect. 2. Ratios, financial statements, etc. – the quantitative aspect. Their aim is to determine whether the company is currently out of favor with the market and is really worth considerably more than its current valuation.

*Fundamental Analysis is used to analyze a stock, currency or contract – there are two basic approaches: 1. Bottom up analysis. 2. Top down analysis. The two terms are used to distinguish this type of analysis from other kinds of investment analysis, such as technical and quantitative. 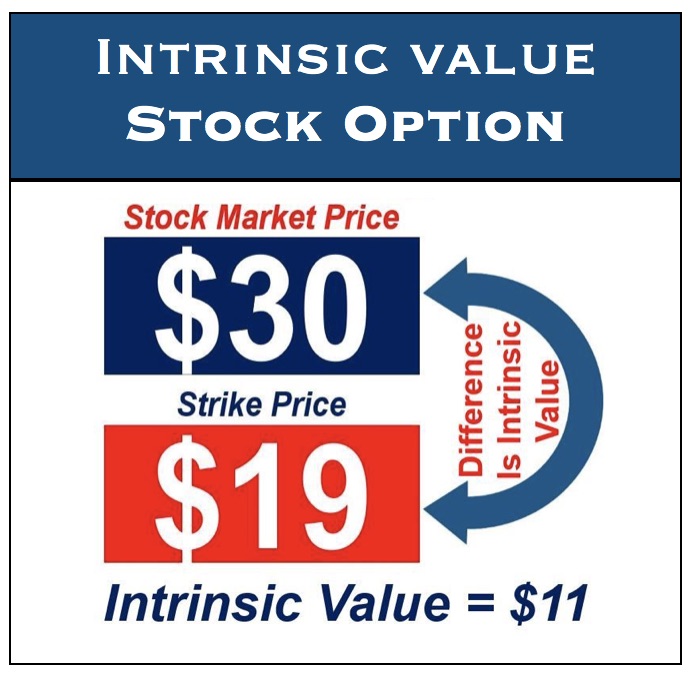 The Intrinsic Value is the difference between a stock’s market price and the option’s strike price.

For example, if a call option’s strike price is $19 and the underlying stock’s market price is $30, then the call option’s intrinsic value is $11. You will hardly ever find an option that is worth less than what an option holder can receive if the option is exercised.

According to the NASDAQ:

** Rate of return is the ratio of the income we gain from an investment over its starting cost.

Outside the world of business, intrinsic value has traditionally been thought to lie at the heart of ethics. Philosophers throughout history have used several terms to refer to such value. The intrinsic value of something is the value that that thing has ‘for it own sake’ or ‘in its own right’ or ‘in itself’. The opposite is extrinsic value.

When making moral judgments, philosophers say it is crucial to know the intrinsic value of things. For example; a fundamental form of consequentialism says that whether an action is morally right or wrong has exclusively to do with whether its consequences are intrinsically better than those of all other possible actions one could perform under the circumstances.

Several philosophical theories also hold that what is right and wrong morally has at least in part to do with the intrinsic value of the consequences of what we do.

According to the Stanford Encyclopedia of Philosophy:

“Moreover, if, as is commonly believed, what one is morally responsible for doing is some function of the rightness or wrongness of what one does, then intrinsic value would seem relevant to judgments about responsibility, too.”

Meaning of intrinsic: refers to something that is an extremely important and basic characteristic of a person or thing – belonging to a thing by its very nature. The word emerged in the English language in the 15th century with the meaning ‘internal, inward or interior’, and came from Middle French intrinsèque, meaning ‘inner’. The French term came from Medieval Latin intrinsecus, meaning ‘interior, internal’.

Below are some quotes by famous people using the word ‘intrinsic with its business, scientific and lay meanings.

– “Gold and silver, like other commodities, have an intrinsic value, which is not arbitrary, but is dependent on their scarcity, the quantity of labour bestowed in procuring them, and the value of the capital employed in the mines which produce them.” (David Ricardo, 1772-1823 – an English political economist)

– “And indeed this theme has been at the centre of all my research since 1943, both because of its intrinsic fascination and my conviction that a knowledge of sequences could contribute much to our understanding of living matter.” (Frederick Sanger, 1918-2013 –  a British biochemist who won the Nobel Prize for Chemistry twice)

– “For some of us, books are intrinsic to our sense of personal identity.” (John Updike, 1932-2009 – American novelist, poet, short story writer, art critic, and literary critic)

– “Gold is a commodity; over the long run, as we look back, it has not been a good investment. You can’t look at the intrinsic value of gold as you can a business. Gold doesn’t give you cash flow, and, at the end of the day, cash flow is what is important. Gold doesn’t give you dividends.” (Michael Lee-Chin –  a Jamaican business magnate, investor, and philanthropist, founder and Chairman of Portland Holdings Inc.)

– “In an efficient market, at any point in time, the actual price of a security will be a good estimate of its intrinsic value.” Eugene Fama – an American economist and Nobel laureate in Economics. Many refer to him as ‘The Father of Finance’)

– “Gold has intrinsic value. The problem with the dollar is it has no intrinsic value. And if the Federal Reserve is going to spend trillions of them to buy up all these bad mortgages and all other kinds of bad debt, the dollar is going to lose all of its value. Gold will store its value, and you’ll always be able to buy more food with your gold.” (Peter Schiff – an American stockbroker, author)

How the intrinsic value of a stock is calculated

This BrainBought video explains what the intrinsic value of a stock is and how it is calculated.