What is inward investment? Definition and meaning

Foreign direct investment (FDI) is a common kind of investment that comes into a company from outside. FDI is an investment in the form of a controlling ownership in a company in one country by an entity – firm or individual – based in another country. It differs from foreign portfolio investment in that FDI has a notion of direct control.

According to OxfordDictionaries.com, inward investment is:

“Investment in a country made by investors outside that country.” (as in: “Local governments are focused on generating inward investment.”) 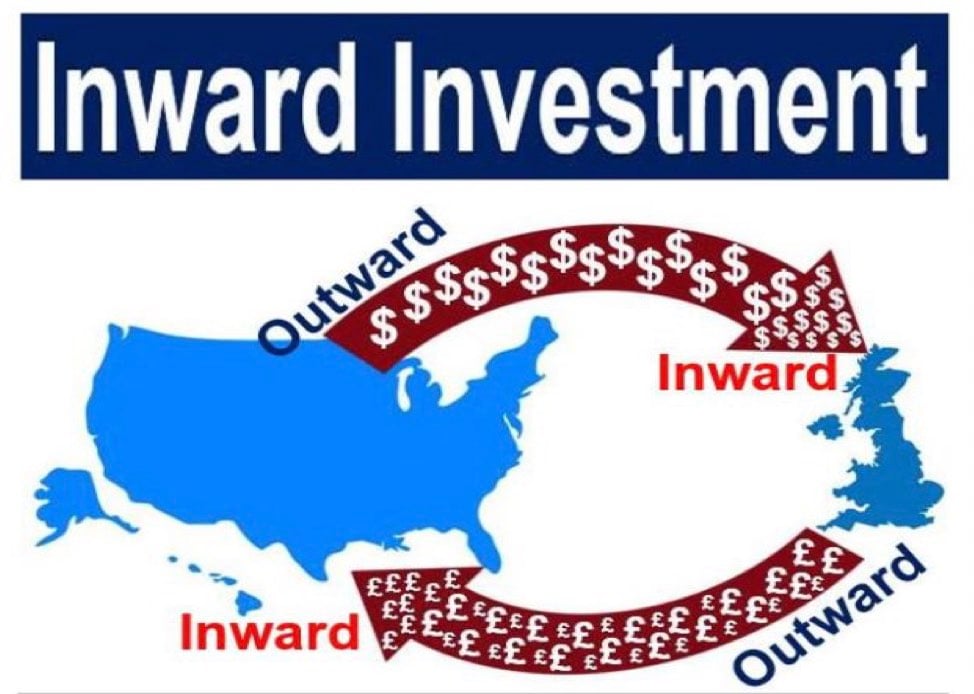 Inward refers to the purchase of capital goods. Capital goods are used in producing other goods, instead of being bought by consumers. Heavy machinery in a car factory is an example of capital goods, while the cars that the factory produces are consumer goods. The United Kingdom was by far the largest foreign investor in the United States in 2015, followed by Japan and Canada. US inward investment came from more than 100 countries. (Image: ofii.org)

Inward investment creates jobs in the country – it brings wealth to its economy. Much of this type of investment comes from multinational corporations, which invest money by introducing new industrial sites to an area in order to produce more goods locally in their foreign markets.

If labor and other costs are cheaper in another country, the multinational may even set up production facilities there for exports around the world, and even sell them in its home market.

For example, Mexico has received a great deal of inward investment from US multinationals, which then produce goods in Mexico to be sold to US consumers. The Ford Motor Company, for example, has a factory in Cuautitlán in Mexico which assembles cars that are then exported to the United States.

Many governments across the world become actively involved in attracting inward investment by offering incentives such as special tax deals and ultra-cheap land for building factories. Some even offer to contribute money to a project.

In several parts of the world, such as the European Union, governments have to adhere to certain commercial regulations, and face penalties if they offer foreign companies ‘sweeteners’ that violate those regulations.

Sometimes, the local population may criticize the government for concentrating on attracting inward investment to such an extent that home-grown small businesses and entrepreneurs are neglected. The largest direct foreign investor in the United Kingdom is by far the United States. (Source: gov.uk)

Inward investment in the United States in the form of foreign direct investment through 2015 totaled $3.1 trillion.

According to the Washington-based Organization for International Investment (OFII), a trade association representing the interests of American subsidiaries of overseas corporations, every year foreign companies make new investments in the US, which benefit the national economy in numerous ways. They:

International companies invested $353 billion in the economy of the United States in 2015, twice as much as in 2014. Equity inflows worth $220 billion in 2015 made up most of the foreign direct investment, followed by reinvestment of earnings of $83 billion.

In 2015, the US was the world’s number one destination for foreign direct investment, up from third place in 2014.

The United States’ share of global investment declined from 37% in the year 2000 to 22% in 2015, mainly due to increased competition from other countries, as well as the protectionist policies of some governments.

In its latest report, OFII wrote:

” For the fourth consecutive year, A.T. Kearney’s 2016 FDI Confidence Index has ranked the United States as the world’s top market, holding its lead over second-ranked China.”

“Canada and Germany moved up to third and fourth place, respectively, and the United Kingdom dropped from third to fifth place, with future investment inflows likely to diminish even more because of its recent decision to leave the European Union.” According to the Department of International Trade, foreign direct investment figures show that the UK had a record number of inward investment projects, which created the 2nd-highest number of jobs on record in 2015-2016.

The United Kingdom is the top European destination for investment from developing countries.

During the 2015-2016 period, nearly 1,600 new jobs have been created each week by foreign direct investment.

UKTI (UK Trade & Investment), part of the Department of International Trade, claims it helped secure 4 out of 5 of the projects that led to the creation of these jobs.

A total of almost 390,000 new jobs have been created through foreign direct investment in the UK since 2010.

The US is looking to boost foreign direct investment from China.