What is a layoff? Definition and meaning

A layoff is the suspension or permanent termination of employment of workers by their employer. A layoff does not occur because workers did something wrong – it is not their fault. People are laid off because the commercial enterprise’s sales have declined, it is in financial trouble, has gone bankrupt, or is unable to obtain a crucial component or raw material for the production of goods.

The verb is ‘to lay off’. In South Africa, the term ‘retrenchment’ means the same as ‘layoff’.

Layoffs may be temporary or permanent. When they are permanent, the meaning is the same as ‘redundancy’. 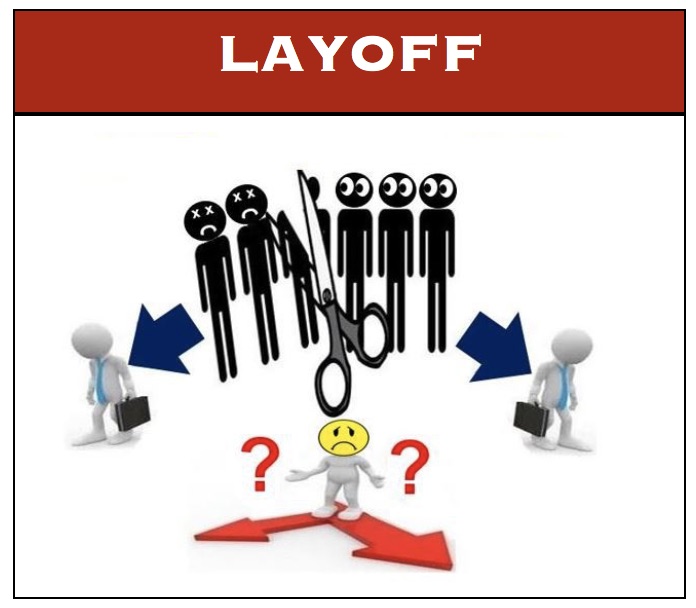 If you are ever laid off, it is important to remember that the job itself has been suspended or terminated. It is not your fault.

Business leaders tend to use a number of euphemisms when announcing a layoff. Rightsizing, which in theory means adjusting a company so that it is better able to make a profit, nearly always means laying off workers permanently. Downsizing is another term that managers and directors use when redundancies or layoffs are necessary.

When employees choose to leave their jobs, they resign (noun: resignation). In cases of redundancies, the employer may offer extra incentives, such as more money, and see how many workers volunteer to leave – this is called voluntary redundancy. When the employer makes the decision to get rid of somebody, it is known as firing or being fired.

A layoff differs from a firing in that firing could be because the worker did something wrong or did not carry out his or her duties up to the required standard, while laying somebody off is never the worker’s fault. 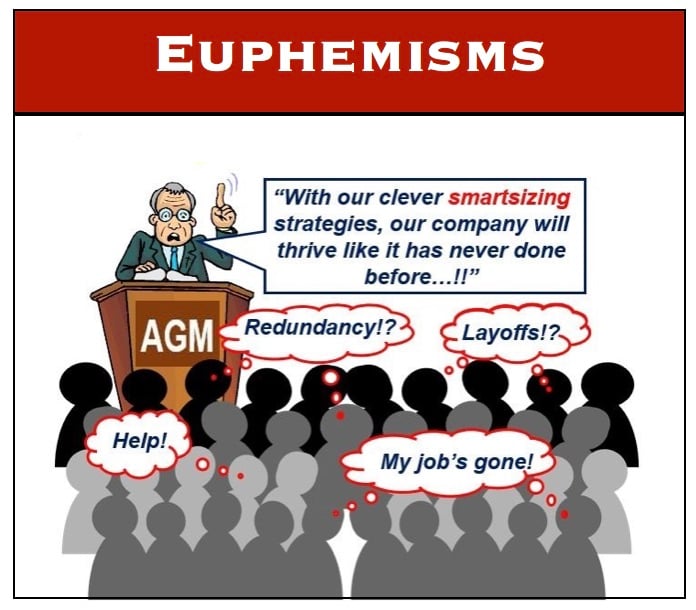 A euphemism is a mild word substituted for one that the speaker or writer considers to be too blunt or harsh when referring to something unpleasant or perhaps embarrassing. The term ‘layoff’ has many euphemisms.

As ‘layoff’ has an ambiguous meaning – the permanent or temporary termination of employment – it is best to precede the term with either the words ‘permanent’ or ‘temporary’. Originally, the term only referred to the temporary loss of employment. Over the past twenty or thirty years, its meaning has broadened.

The following euphemisms are used when announcing that a mass layoff is going to take place:

One can understand why business leaders choose to use euphemisms when they are about to make workers redundant. Shareholders may become jittery, and morale among the employees, including those who are not made redundant, can be undermined.

However, painting a rosy picture over an inevitable and unpleasant event can sometimes backfire, leading to strikes, downing of tools, work to rule, and nasty comments and stories appearing online and eventually in newspapers and other news media. Eventually, the company’s brand image may be damaged.

Layoff: Last in, first out

Nobody likes being at the receiving end or ordering a permanent layoff. A popular but controversial technique is to let go of the newest employees first. This strategy is called LIFO, which stands for Last In, First Out.

If the company’s accountants have been told to find the best ways of reducing long-term costs, they may argue that the longer-serving employees, who generally earn more than their newer colleagues, and have longer annual vacations and more perks, would save the company more money if they went first.

Giving notice about a layoff

Usually the workers are told in advanced that there will be redundancies. In smaller businesses, the employer is not legally bound in most countries to give notice. If a worker is unexpectedly told that he or she has been made redundant, the effect can be devastating for that person.

In the USA, the WARN (Worker Adjusting and Retraining Notification) Act states that private sector companies must give 60 days’ notice of plant closures and large-scale redundancies. Several states in the US have their own more stringent regulations.

These consultations are compulsory so that the employer and employees or their representative may look for ways to either avoid or minimize the number layoffs.

In the UK, a worker in any-sized company who has been an employee for between one month and two years must be given at least one week’s notice. This notice period increases by one week for each year he or she has been working for the employer, up to a maximum of 12 weeks. During the notice period, any time taken off work to attend job interviews must be granted, and with full pay.

Outplacement refers to helping people who are laid off to find a new job. The service may be offered by specialized professionals working within large companies or agencies that are contracted by the employer.

Across the world, the frequency of layoffs has increased considerably since the early 1980s. Companies have increasingly found the need for some kind of help in reducing the negative effects of a mass layoff for both the employees who had to go and those who remained.

Outplacement is today a common component of severance agreements. Even if the service is not provided free of charge by the employer, many people are willing to pay for it privately.

Finding yourself looking for a job again after working in the same company for ten, twenty or thirty years can be scary and confusing.

Being coached on how to cope and proceed may considerably improve an individual’s chances of not only finding another job, but one for which he or she is ideally suited.

In this video, Christopher Williams explains that a layoff is a forced change that we cannot prepare for – in some cases, it will test every single fiber of our being. He says there is a healthy way of processing forced change.