What is an LED or light-emitting diode?

LED stands for light-emitting diode, an electronic device that lights up when electricity passes through it. The physical properties of LEDs determine the types of light that they emit. The devices have many applications and benefits. As room lights, for instance, they use less energy and last longer than filament bulbs. 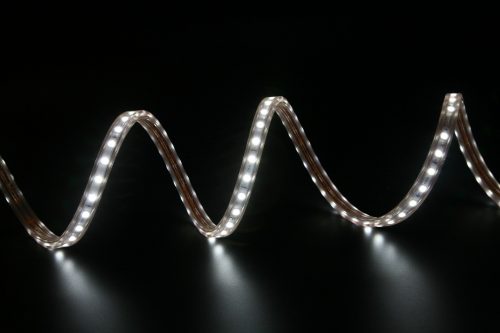 LEDs feature in a variety of consumer products, from interior lights and vehicle lamps, to displays, posters, signs, cameras, TV remotes, and wearable technology such as fitness trackers.

The many fields of application – which include medicine, forensics, and food technology – are growing rapidly.

How do LEDs work?

Light-emitting diodes (LEDs) are semiconductor devices that emit light when an electric current passes through them.

As far as the science is concerned, the devices rely on two main aspects. One is that they emit light and the other is that they are diodes. To explain how they work, let us start with the latter.

A diode is an electronic component that allows electrical current to flow easily in one direction and almost not at all in the other direction. It is the electrical equivalent of a valve.

The diode comprises two different materials – one n-type and the other p-type – that meet at a p-n junction. The n-type material is abundant in free electrons while the p-type has lots of holes that combine easily with electrons.

When a current passes through a diode designed as an LED, the free electrons in the n-type material combine with the holes in the p-type. Each time an electron combines with a hole, it releases energy as a packet of light.

By manipulating the composition and set-up of an LED, it is possible to fix the wavelength of light that it emits. Because of this, the devices typically fall into three types: infrared, visible, and ultraviolet.

Infrared LEDs emit light in the infrared part of the spectrum. They are cheap and efficient and have many uses. Perhaps the most familiar use is the beaming of commands from a remote to a TV set. When we press a particular button on the remote, it uses an LED to send codes to the TV in the form of infrared pulses. Different codes control different functions, such as change channel, power on or off, and volume.

The devices are also useful in other fields that use infrared light, such as law enforcement, the military, and medicine.

The lighting firm Osram have recently developed an infrared LED application for access control and security cameras. The new design allows the cameras to be smaller and cheaper. The wavelength of light that the LED emits is outside the visible range of the human eye but within range of detection by camera sensors.

Infrared LEDs also have many uses in medicine. A new application is in therapeutic devices for healing deep tissue. The LEDs generate infrared light, which passes through skin and muscle tissue to reach deeper tissue. By stimulating the mitochondria, or tiny power houses of cells, the technology helps to relieve pain and promote healing of injuries and wounds.

Visible light LEDs emit light in the visible spectrum. For general lighting, the devices use 100 times less energy than incandescent lamps. This creates huge opportunities not only for consumers and businesses but also in other applications such as architectural lighting and traffic control.

Consider, for example, the portable temporary lights for traffic control around roadworks. With LEDs, there is no need for a large generator – they can run on solar panels.

LED lights are also safer and more durable than traditional options such as incandescent, neon gas, or fluorescent lights.

In addition, LEDs offer a vast range of vivid colors. This feature has caught the attention of fashion designers, many of whom are incorporating LED lights into their garments.

While all forms of lighting are an obvious use of visible light LEDs, the devices are also attracting interest in a technology called visible light communication (VLC).

VLC is a wireless data communication method that uses visible light. It has been around a while but until recently was based on fluorescent lamps. The advent of LEDs – and their many advantages over fluorescent lamps – has rekindled interest in VLC.

Ultraviolet (UV) LEDs emit light in the ultraviolet part of the spectrum. They also have many uses and this section touches on three of them: industrial curing, water purification, and medicine.

Many water purification systems use UV radiation to degrade pollutants and kill bacteria and viruses. However, the mercury lamps that they use are unreliable, bulky, costly to run, and not good for the environment. Scientists have been investigating the potential for using UV LEDs instead as they leave a much smaller carbon footprint and do not contain mercury.

UV LEDs are increasingly used in medicine and life sciences. In spectrometry instruments, for instance, they offer accurate and reliable measurements in real-time. This can be especially useful where optimal dosing is important, such as in kidney dialysis. More recent medical applications include the treatment of skin conditions such as eczema and psoriasis.