A market follower is a company that follows what the leader in its sector does. A market follower does not like taking risks, i.e., it is the opposite of a maverick. Instead, it waits and observes what its competitors do, especially the market leader. It then only adopts the leader’s successful strategies.

A market follower may be second to the market leader in a particular industry. It does not want to lose its share by disrupting the status quo.

This type of company never challenges the leader. However, it can usually maintain market share with significantly lower investment costs than the market leader.

The follower’s investment is lower because the market leader paid for most of the groundwork.

It does not challenge the leader for one or a combination of reasons. Perhaps it believes that in a confrontation, the leader would win because it has more resources.

A market leader, in this context, is a company with the largest market share. For example, Samsung and Boeing are market leaders in the smartphone and aircraft markets respectively.

Market share refers to how big a company’s slice of the total market pie is. We usually express market share in percentage terms. If Company XYZ has a 20% market share, it means that of every 100 units consumers buy, twenty are XYZ’s.

The Cambridge Dictionary has the following definition of the term ‘market follower’:

“A company that is not the leading company in a particular market but that chooses to keep its position rather than competing in a forceful way to increase its share of the market.” 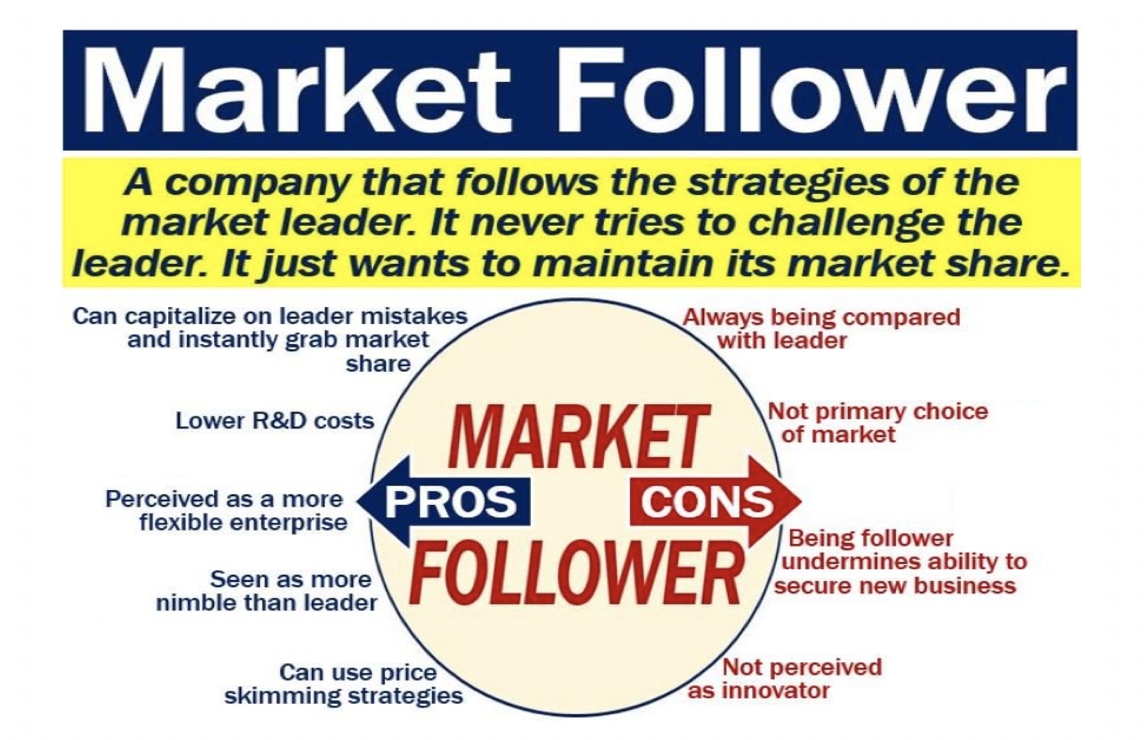 A market follower may be a firm that enters a product market after another company has gained significant market share.

The company that follows the major one into the market begins with a significantly smaller market share. However, it has an important advantage as a newcomer.

It benefits from all the promotion the front-running company did. That promotion educated consumers. In other words, the front-runner has already explained to consumers why they should buy the product.

The front-runner has already spent money making the consumer understand the product, and also to want it.

Let’s suppose, for example, that Bicycles A Inc. is the first company in the world to sell bicycles. It has spent the past five years not only selling bicycles but also spending lots of money on advertising.

The advertising campaign educated consumers about the benefits of owning and using a bicycle. Educating consumers takes time and can be very expensive.

Now, Bicycles B Ltd. enters the market. Bicycles B does not need to spend as much on advertising as Bicycles A did.

Bicycles B does not need to spend money educating consumers because Bicycles A has already done this.

Therefore, Bicycles B comes in with an important advantage – lower costs. It has no intention of challenging the market leader.

All Bicycles B wants is a specific market share, and to hold onto that share. It is happy to let the market leader remain on top.

This Marketing 91 video talks about three kinds of market followers.

– First, one that follows the market leader in as many markets as it can. However, it never blocks the leader because it wants to avoid conflict.

– Second, a company that follows at a distance. This firm maintains some difference in price, distribution, and quality compared to the leader.

– Third, a company that follows selectively. This market follower cannot copy the market leader in all its activities. Therefore, it only follows the leader in some activities.