What are Mergers and Acquisitions (M&A)? Definition and meaning

Mergers and acquisitions, often referred to as M&A, is a practice of corporate finance that deals with combining, dividing, selling, and buying different companies to create a new enterprise, merge them together, or help a company complete a takeover.

M&As allow companies in similar industries to merge and grow in their respective sector without the need to create a subsidiary or engage in a joint venture.

M&A activity has been progressively increasing over the past few decades. Experts say that today, many companies believe their only chance of surviving in this global market is by uniting with other companies.

Many people, when they see the acronym M&A, believe mergers and acquisitions are the same – they aren’t!

A merger is essentially the consolidation of companies to form a new company, while an acquisition is when one company buys out another company and absorbs their assets establishing itself as the new owner – as such no new company is created. 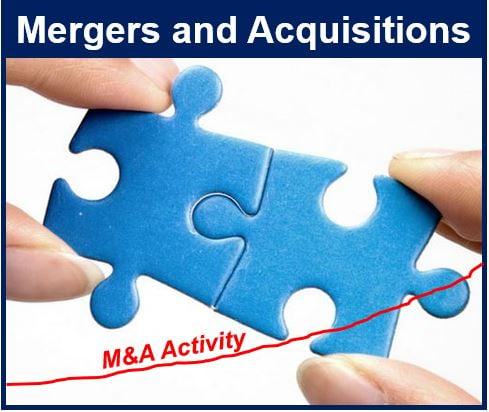 Since the 1980s, M&A activity has increased considerably.

Mergers are also known as ‘a marriage of equals‘ because the companies involved are usually of a similar size and stature.

An acquisition of a company can either be ‘friendly’ or ‘hostile’, depending on the context and the means in which the acquirer goes about taking over the other company. In a friendly transaction both companies are involved in the negotiations and cooperate together. A hostile takeover occurs when the board and management of the target company is not as involved in the process and the company is bought out without them having much prior knowledge of the offer. As term implies, in a hostile takeover, the board is against the acquisition.

The whole process of an M&A can last a very long time, and there are a number of things that can go wrong in the process, such as the seller and buyer not agreeing on a selling price, sudden volatility in the market, or the possibility of the buyer backing out.

Investment banks are currently at the forefront of providing companies with M&A advice and financing. However, there has been a recent increase in the number of specialist M&A advisers, who solely offer advice and don’t provide financing – these companies are often known as Merchant Capital Advisors.

The process of an M&A transaction is initiated with a letter of intent. The letter of intent typically binds the entities to confidentiality and exclusivity obligations so that the transaction can undergo a due diligence process – involving accountants, lawyers, and people in management from both sides.

Once the due diligence process is over then the entities draw up a “merger agreement”, “asset purchase agreement”, or “share purchase agreement”. These definitive agreements typically focus on five key terms: conditions, representations and warranties, covenants, termination rights, and provisions related to acquiring shareholders approval.

There are several different methods of financing an M&A deal:

Cash on hand: this is not associated with high transaction costs and consumes excess cash or unused debt capacity – potentially decreasing debt rating.

Issue of debt: consumes excess cash or unused debt capacity but typically decreases debt rating and is associated with an increased cost of debt. The transaction costs of underwriting or closing are between 1 to 3 percent of the face value.