What is the minimum wage? Definition and meaning

Minimum wage is the minimum an employer is allowed to pay an employee per hour – it is against the law to pay less. Employees must receive this minimum level of pay. In some countries, trainees and workers under the age of 18 may have a lower minimum hourly pay rate than their older counterparts.

By definition ‘minimum wage’ means workers can be paid more than the minimum wage, but never less. In the UK, there is a ‘name and shame’ system organized by the Government, which lists employers that paid their workers less than the legal minimum. 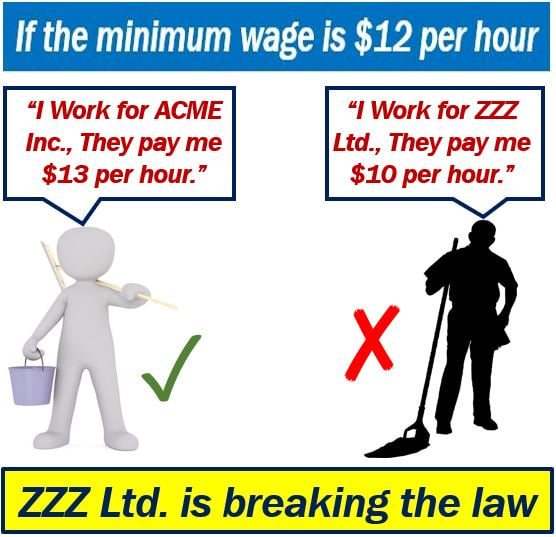 The minimum wage is typically higher in the advanced economies compared to the emerging nations.

Many US states also have their own minimum hourly wage laws. In cases where a worker is subject to both the state and federal minimum wage laws, he or she is entitled to the higher of the two.

Twenty-nine of the fifty states in America have minimum hourly wage rates that exceed the federal rates, led by Massachusetts and California at $10 per hour.

According to the United States Department of Labour:

The economic effects of a minimum wage

Let’s look at California and Massachusetts’ $10 minimum hourly wage. Having a minimum amount employers can pay their worker is affordable if the employee’s marginal productivity is greater than $10 per hour.

However, for those whose marginal productivity is less than ten dollars per hour, a minimum wage set at $10 creates an instant shortage of profitable manpower.

If a worker’s marginal productivity is $8 per hour, the only way the employers can take on workers is at a loss.

Many economists argue that the minimum wage fuels unemployment for this very reason – many jobs that would have existed had there been no minimum currently don’t, so there are more people out of work.

Supporters of Keynesian Economics disagree. They say that aggregate demand created by having a minimum wage boosts the economy, keeps consumer demand healthy, which in turn fuels growth in jobs.

There are many other arguments that support the minimum wage: 1. Better off employees get ill less often – if workers have a living wage they are less likely to miss work because of illness, which is better for the economy. 2. A minimum hourly rate of pay keeps extreme poverty levels down, which means there is less crime. Extremely poor people are more likely to break the law to survive.

Whether these perceived benefits are felt on a national scale we will never know for certain. There are no large-scale studies on this. The only way we could be sure would be to split a country down the middle – one half has and the other does not have a minimum wage – and monitor the two halves over a ten or twenty year period.

The evidence we do have suggests that minimum wages, or small minimum wage increases actually improve the employment market and boost GDP (gross domestic product). Voters in Florida approved a hike in 2004. A follow-up comprehensive study found that employment subsequently increased and the economy got stronger

Some economists have suggested that introducing or raising minimum wages reduces on-the-job training, because that money is used up paying salaries. An empirical study carried out in 2001 found there was no evidence that minimum wages reduced training – in fact, its findings showed that training actually increased slightly.

It all started with a ‘maximum’ wage

Did you know there was once a maximum wage? In 1349, King Edward III set a maximum wage for laborers in medieval England. He was a wealthy landowner, who along with his Lords, was dependent on serfs to work the land.

The Bubonic Plague (Black Death) reached England in the autumn of 1348 and decimated the population. Consequently, there was a severe shortage of farm laborers, which caused wages to soar. King Edward III set a wage ceiling.

The Justice of the Peace was charged with setting the maximum wage. Eventually, he started setting formal minimum wages. In 1604, King James I signed the Act Fixing a Minimum Wage for workers in the textile industry.

In the 19th century, Britain favored laissez-faire policies and disfavored both upper limit and lower limit wage regulations. During that century there was significant labor unrest in several industrial nations. Wage Unions, which had been illegal, were decriminalized and collective agreements became more popular.

New Zealand and Australia – in the 1890s – were the first countries to introduce legislation governing minimum wages. The movement initially focused on stopping worker exploitation in sweatshops.

The New Zealand government enacted the first national minimum age law in 1894, followed in 1896 by Australia, and the UK in 1909. Statutory minimum wages were first introduced in the United States nationally in 1938.

Today, there is legislation or binding collective bargaining regarding minimum rates of pay in over ninety percent of all nations.

Video – Minimum wage in the USA

This Time video shows that the minimum wage calculated in purchasing power was considerably higher in the 1960s than it is today. Put simply, it has not managed to keep up with inflation.