What is money laundering?

Money laundering is the process of ‘cleaning’ illegally-obtained money so that it appears to have come from a legitimate (legal) source. The aim of the money launderer is to make the money usable, which is only realistically possible if it cannot be traced back to its real origin.

Placement: the money is discreetly introduced into the legitimate financial system.

Layering: the money is moved from one place to another, and then another … several times. It is sent around the globe using and abusing shell companies, money transmitters and intermediaries. The aim is to create confusion. The funds will be wired through a large number of different accounts.

Integration: the money is integrated into the financial system via further transactions until it is fully laundered, i.e. completely ‘clean’.

Dirty money is risky to keep and use

Money obtained illegally, for example from drug trafficking, illegal gambling, illicit arms sales, *insider trading, extortion, bribery, and theft is ‘dirty’. If it is not ‘cleaned’, banks and other financial institutions will realize and refuse to deal with it, and the police and other financial authorities will be told (or will spot it) and go after the criminals.

Criminals want to use the dirty money, and the only way to do that is run it through the laundering procedure, which may vary in complexity and sophistication.

The proceeds of many criminal activities are generally generated as cash. Criminals do not like to hold onto large quantities of hard cash. It raises the possibility of exposure, getting it stolen by rival criminals, and seizure by law enforcement.

According to INTERPOL (a network of police forces from 190 countries all over the world), money laundering is:

“Any act or attempted act to conceal or disguise the identity of illegally obtained proceeds so that they appear to have originated from legitimate sources.” 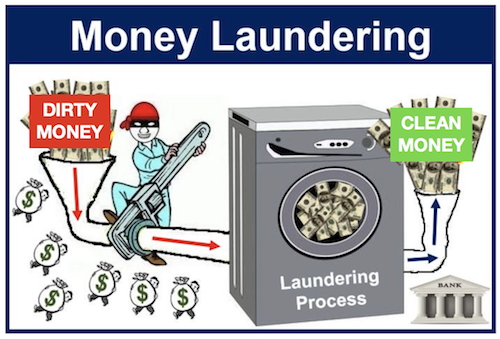 The aim of money laundering is to get dirty money, which is difficult to use safely, turned into clean money.

The International Compliance Association says that hundreds of billions of dollars of dirty money is laundered through financial institutions each year. The nature of the products and services the financial services industry offers – managing, controlling and possessing money and property belonging to others – makes it vulnerable to abuse by criminals.

The British Government says that today the term money laundering also refers to funds that are used to finance terrorism, regardless of how they are obtained.

According to the US Department of the Treasury:

“Money laundering can facilitate crimes such as drug trafficking and terrorism, and can adversely impact the global economy.”

UNODC (United Nations Office on Drugs and Crime) carried out a study to determine the magnitude of illegal funds generated by organized crime. The authors estimated in 2009 that criminal proceeds amounted to 3.6% of Global GDP, with 2.7%, or $1.6 trillion, being laundered.

According to US authorities (FFIEC), private banking services are vulnerable to money laundering schemes. Several past prosecutions have demonstrated this vulnerability.