What is a money order? Definition and examples

A money order is a financial instrument – a tradable asset – issued by a government or financial institution, usually a bank, that allows the person or entity named on the order to receive a specific amount of cash *on demand.

* On demand means that a participating bank or retailer must give the person named in the order – the payee – the amount of money specified in cash immediately, if that is what they want.

A money order functions very much like a personal check (UK: cheque), in that the individual who signed it may also stop payment. 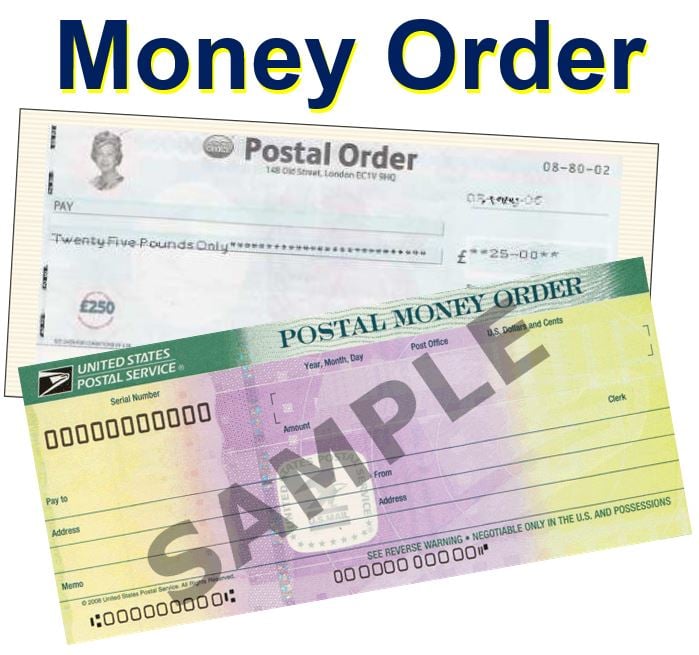 Most post offices across the world have a money order service. They are seen as safer than sending a check because they do not bounce. Many people prefer them because they do not need to provide their own financial details. (Images: US Postal Service and UK Post Office)

A trusted method of payment

They are a more trusted method of payment than a check because the funds for the amount shown on the order must be prepaid, i.e. they do not bounce.

Money orders are readily accepted and converted to cash – usually by bank branches, post offices, some supermarkets, smaller moneylenders, and even small shops. They are especially useful for people who do not have a bank account.

If you need to pay a bill or a debt, and checks or credit cards are not accepted, a money order may be the solution.

According to the United States Postal Service: MoneyGram and Western Union are probably the two best known companies globally that provide an international money order service. The payee gets his or her money virtually instantly (up to one hour after you have completed the forms and paid)

The Post Office (UK) says its Postal Orders work in a similar way to checks, but you do not need a bank account. They are great for eBay and other auction sites, and allow you to pay without handing over your financial details.

Money orders look like checks, and in most cases have the payee’s name printed on it. The UK Post Office says its Postal Orders can be crossed so that the payee can only pay into his or her bank account.

An international money order is much the same in many aspects as a regular money order, except that it can be used for payments when the payee is in another country.

An international money order is typically issued by the buyer’s bank and bought in the payee country’s currency, or one that his or her country accepts.

International money orders are much safer than sending currency through the post. In order to get their money, payees have to present a form of photo identification.

Money orders and bank drafts are quite similar, both of them are paid for in advance with a specified and printed amount. The two of them are seen as extremely secure forms of payment to a 3rd partly.

However, a money order is literally ‘bought’ – you give the cash to the issuer and the money order is created – while a bank draft is a kind of check drawn on the bank’s funds after it has accepted the money from your bank account. According to experts, money orders are more secure than bank drafts.

While a bank draft is only issued by a bank, money orders can be issued by a wide range of outlets, including some certified stores and post offices.

Money orders have a limit on the amount – bank drafts don’t.

Financial historians say the first money order system was established in 1792 in Britain by a private firm – it was extremely expensive and not very successful.

In c.1836 the system was sold to another private company which significantly reduced the fees, after which it became much more popular.

Noticing how successful and profitable it was, the UK Post Office took over the system in 1838, and reduced the fees even further, while still having a profitable and extremely popular money order system.