What is the multiplier effect? Definition and examples

A multiplier or the multiplier effect is the factor by which the return resulting from an expenditure is greater than the expenditure itself, or the way in which a change in spending leads to an even bigger change in income. The term is generally used in reference to how much a certain amount of expenditure increases total national income or GDP (gross domestic product).

Imagine that the government spends an extra $5 billion on education. The immediate effect is an increase in teachers’ income as well as greater sales of goods and services for companies that supply schools.

These people and businesses will in turn spend their extra income, making other entities richer, who spend some of that money, etc.

As far as the theory goes, this process should go on and on forever, in which case the multiplier has an infinite value. Most people and entities who become richer as a result of the initial expenditure put some of that money into savings rather than spending it.

How much of their extra income is spent depends on their marginal propensity to consume. The multiplier’s value can be calculated by using the following formula: 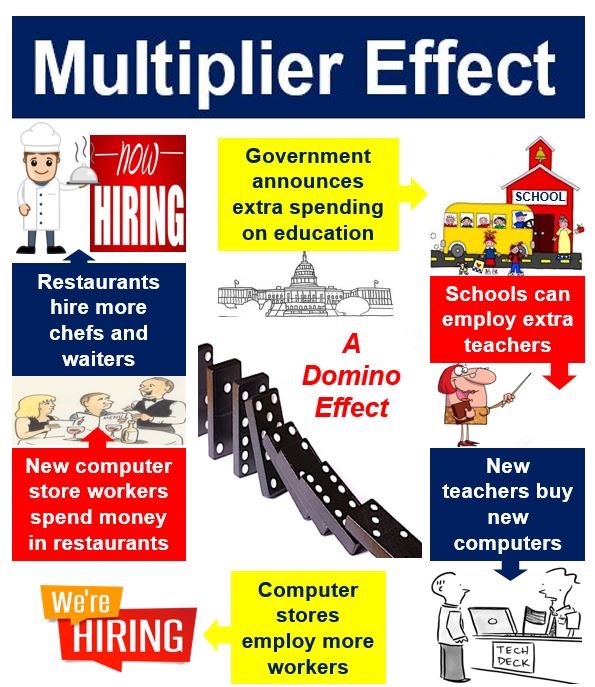 Public spending triggers a domino or ripple effect, with additional spending occurring throughout the whole economy.

The multiplier and John Maynard Keynes

British economist John Maynard Keynes, whose ideas fundamentally changed the theory and practice of macroeconomics and governments’ economic policies, created the multiplier theory and its equations.

Keynes said that an increase in government spending created a proportional boost to overall income or GDP, because the additional spending would have a ripple effect through the economy.

Keynes first mentioned this effect at the height of the Great Depression in 1933 in his book – The Means to Prosperity. While addressed mainly to the British Government, his work also contained suggestions for several other countries that were also affected by the Great Depression.

US President Franklin D. Roosevelt and other world leaders received a copy. The British and US governments took the work seriously. This paved the way for the later general acceptance of Keynesian ideas.

According to Keynes, with a multiplier of two, the economy grows by $2 while the government deficit increases by $1.

Scores of papers written by economists have attempted to estimate fiscal multipliers since the global financial crisis of 2007/8 and the Great Recession that followed. The International Monetary Fund (IMF) calculated that the ‘harmful’ economic multiplier for fiscal contractions was often at least 1.5.

The Economist made the following comment regarding governments’ recent fiscal stimulus:

“Even as many policymakers remain committed to fiscal consolidation, plenty of economists now argue that insufficient fiscal stimulus has been among the biggest failures of the post-crisis era. Decades after its conception, Keynes’s multiplier is relevant, controversial and ascendent.”