What is a negotiable instrument? Definition and examples

A negotiable instrument is a document, a written order, with the payer named on it – it guarantees the payment of a specified amount of money, either immediately (on demand) or at a future date. A negotiable instrument promises the payment without condition. The document may be used and interpreted in slightly different ways, depending on what country it is used in and what law is being applied, as well as its context.

The best examples of negotiable instruments are banknotes – dollar bills or pound notes – as well as checks (UK: cheques), promissory notes, demand drafts, certificates of deposits and bills of exchange.

Because the money is promised to be paid on demand or at a specified time, a negotiable instrument is often used by the holder as a store of value – he or she holds on to it.

The document may be transferred to a third party – banknotes are transferred from party-to-party all the time.

When there is doubt about the payer’s ability to pay, transfers may occur at less than the instrument’s face value – this is known as discounting. If I want to exchange dollars for a soft currency such as Venezuelan bolivars, I might not want to go ahead unless I get a good discount, because I know its value is likely to decline soon. 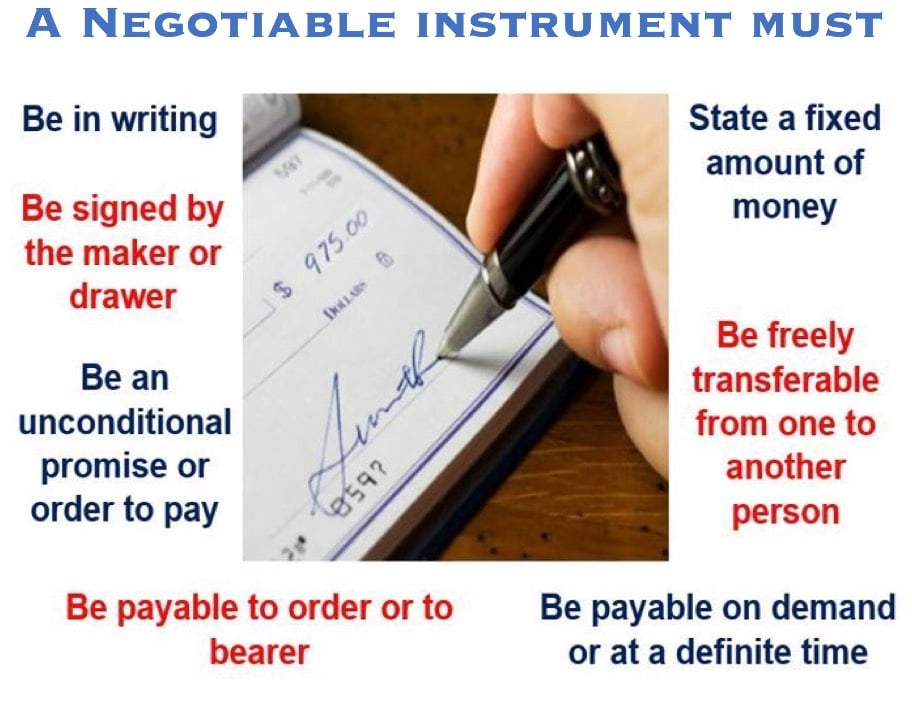 For it to be a negotiable instrument, it must have the features listed in this image.

Promissory Note: involves two parties, the payee (receives the note/money) and the maker of the note. The maker promises to pay a specific amount of money to the payee.

Bill of Exchange: involves three parties: 1. The drawer of the bill – they draft the bill. 2. The drawee – the party who is called on to make the payment. 3. The payee – the party to whom payment is to be made.

Check: – this is an example of a bill of exchange, where the party writing the check is the drawer, the person to whom the check is made out to is the payee, and the drawer is the bank.

According to Reference for Business, for a negotiable instrument to be valid it must meet four requirements:

A bank draft might be a negotiable instrument, but in English law is not a bill of exchange, bacuse it is not drawn on a 3rd party, but rather on the bank itself.

Prototypes of promissory notes and bills of exchange date back to the 8th century in China, during the reign of the Tang Dynasty when feitsyan – special instruments – were used to safely transfer money over long distances.

In 13th-century Persia, the Ilkhanid rulers printed chap or cha which were used as a limited form of paper money used between merchants and the court. The system only lasted about three years, after which it collapsed because the court kept accepting the documents only at progressive discount.

Such documents for money transfer were used by Middle Eastern merchants for several centuries, and eventually were adopted by Italian and Iberian merchants in the 12th century.

From the 13th to 15th centuries, promissory notes and bills of exchange in Italy obtained some of the features we are are familiar with today. The documents continued evolving in 16th to 18th century France – where the endorsement appeared – and 19th century Germany.

Exchange law in the UK and later in the United States was different from continental Europe.