What is neo-classical economics? Definition and meaning

Neo-classical economics is a theory, i.e., a school of economics – that believes that the customer is ultimately the driver of market forces. By market forces, they mean price and demand. The school believes this because the consumer’s aim is customer satisfaction, while the company’s goal is profit maximization.

It is a theory that concentrates on how the perception of the usefulness of products influences supply and demand.

We can also write the word ‘neo-classical’  without the hyphen, i.e., neoclassical. If you are writing a text, you must stick to one type of spelling throughout that document.

It is an economics approach that relates supply and demand to individuals’ rationality. It also relates to people’s ability to maximize utility and profit. Additionally, neo-classical economics increases the use of mathematical equations from its predecessor, classical economics.

The most famous neo-classical economist is Alfred Marshall (1842-1924), a British economist. He took economics to a more mathematically rigorous level.

Marshall extended economics away from the classical market economy focus. He subsequently made it popular by focusing on human behavior.

A major part of microeconomics is neo-classical economics. In fact, alongside Keynesian economics, it forms the neo-classical synthesis which dominates current mainstream economics.

Current economists have widely accepted classical economics. However, many have also criticized it, and frequently created new versions of it.

According to EconomicsDiscussion.net: “Marshall frequently uses biological analogies to explain the organic and evolutionary character of the economic system. He says that the Mecca of the economist lies in economic biology rather than in economic dynamics. Emphasizing that economic development is a gradual and continuous process.” 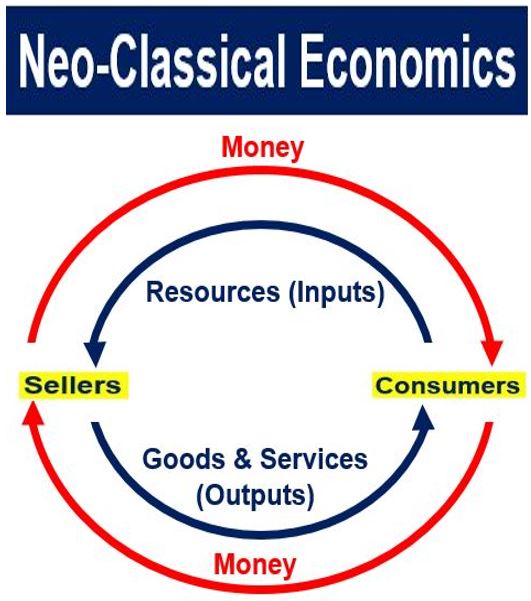 The rational behaviors and goals of the sellers and consumers in the marketplace drive the flow of resources, goods, services, and money. Their objectives and actions lead to market equilibrium.

They focus mainly on market equilibrium and growth at full employment, rather than on the under-employment of a country’s resources.

Neo-classical economics gained prominence at Cambridge University during the second half of the 19th century. It gave the classical economists’ ideas analytical depth by developing the theories of elasticity, monopoly, and equilibrium.

After WWII, Keynesian economics dominated. However, neo-classical economics became fashionable again with monetarism during the late 1970s and 1980s. This was thanks to economists such as Milton Friedman who advised US President Ronald Reagan. Friedman also advised the then British Prime Minister Margaret Thatcher.

According to BusinessDictionary.com, neo-classical economics by definition is:

“‘Classical’ in the sense that it is based on the belief that competition leads to an efficient allocation of resources, and regulates economic activity that establishes equilibrium between demand and supply through the operation of market forces.”

“It is ‘neo’ in the sense that it departs sharply from the classical viewpoint in its analytic approach that places great emphasis on mathematical techniques.”

Followers of neo-classical economics believe strongly that markets must be free. This means that the state should refrain from creating too many rules and regulations.

They say that if government intervention is minimal, citizens enjoy a higher standard of living. For example, they receive better wages and have a longer average life expectancy. Also, the country’s GDP (gross domestic product) grows faster. 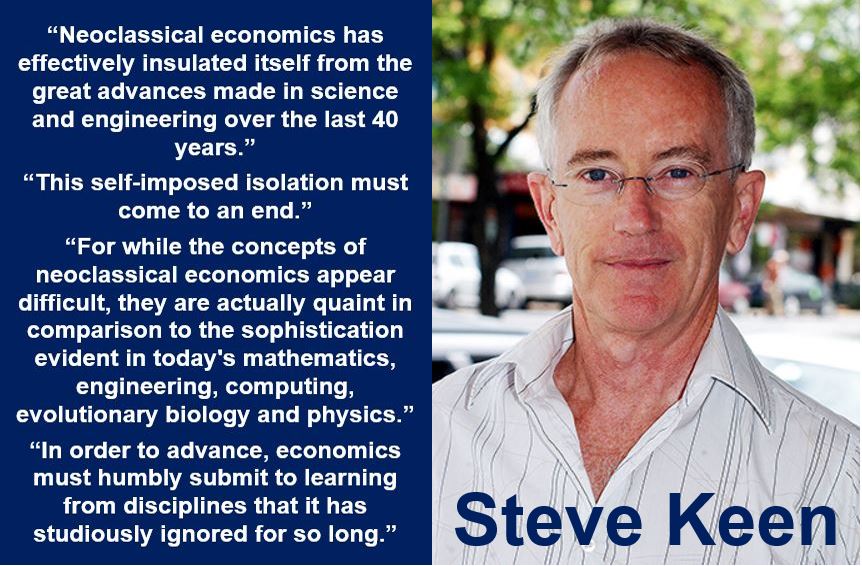 Professor Steve Keen is an Australian-born, British-based economist and author. He says he is a post-Keynesian, neo-classical economics critic. Middlesex University in London said that he: “Accurately predicted the Great Recession, which applies to both the US recession –from December 2007 to June 2009 – and the global recession in 2009.” (Image: cdn.kingston.ac.uk/)

Neo-classical economists believe that there should be some legislation to make sure business behavior is ethical.

There should also be laws to protect consumers. That is why we have regulatory bodies in even the world’s most laissez-faire economies.

Without oversight in the banking industry, for example, there is a greater risk of frequent and extremely severe financial crises.

Markets are an abstract idea, say neo-classical economists. Markets have businesses or individuals selling goods and services, as well as the consumers purchasing them.

If all the sellers who want to sell at or below a given price have sold to all the consumers who are willing to purchase at or above a given price, there is ‘market equilibrium.’ The free-functioning market determines the prices of goods and services. 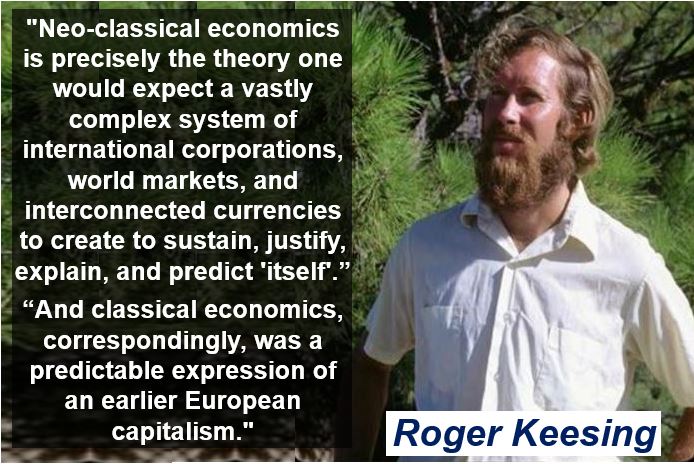 Roger Martin Keesing (1935-1993) was an American anthropologist and linguist, famous for his fieldwork in Kwaio (Solomon Islands). He wrote widely on religion, politics, history, cognitive anthropology, kinship, and language. He is seen as one of the major contributors in the field of anthropology. (Image: perspectivasculturalesunad2015.blogspot.mx)

Neo-classical economics was developed by scholars and authors including French mathematical economist and Georgist Leon Walras (1834-1910), Austrian economist and founder of the Austrian School of Economics Carl Menger (1840-1921), British economist and logician William Stanley Jevons (1835-1882), and Alfred Marshall (1842-1924), one of the most influential economists of his time.

We refer to the transformation from classical to neo-classical economic theory as the ‘Marginal Revolution.’ However, the change in the economic theory took longer than the word ‘revolution’ implies.

The Marginal Revolution is commonly dated from 1871, when Jevons published Theory of Political Economy, Carl Menger’s Principles of Economics came out (1871), to the publication of Walras’ Elements of Pure Economics (1874-1877).

Marginalism is a method of analysis that economists used in microeconomics. It sought to explain economic phenomena through mathematical functions (consumption, production, etc.)

Economic historians still disagree on whether there was a revolutionary change of thought during this period. In fact, some insist there was a gradual development and change of emphasis.

There is also disagreement on whether the transformation spanned just one decade or longer. 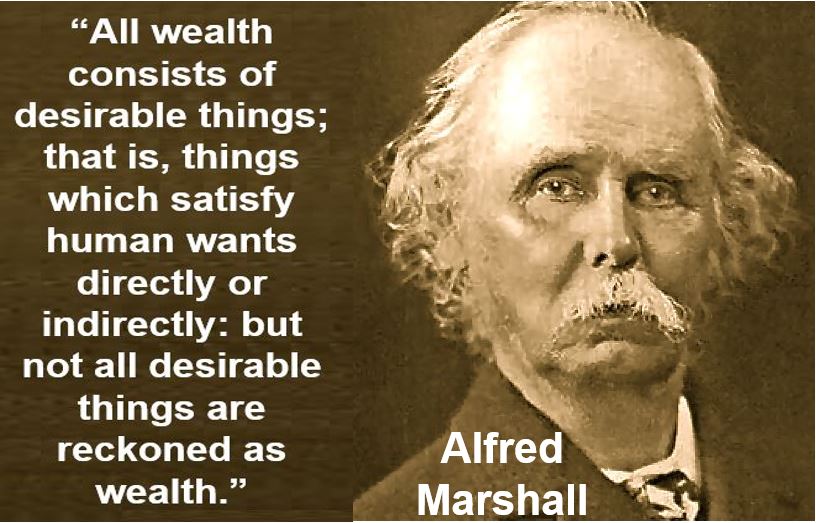 Alfred Marshall (1842-1924) was born in London. He was one of the founders of neo-classical economics. Marshall was probably the most influential economist of his time. He played a major role in shaping mainstream economic thought during his life. (Image: economicsonline.co.uk)

Keynesian economists assume that there are frictions in markets. Prices do not adjust rapidly to fluctuations in demand or supply, they argue. Therefore, any shock to the market will become evident with relatively large shifts in quantities.

Neo-classical economists assume the opposite. They say that markets have few frictions. In other words, prices adjust rapidly and simply. Therefore, quantities do not change when there is a shock to demand or supply, they say.

In the school of neo-classical economics, quantities are not flexible while prices are.