What is nominal value? Definition and meaning

Nominal value is the value of a product or service quoting the money of the day, without taking into account any changes in prices, i.e. inflation. Nominal figures are misleading when we use them to compare values in different periods, because inflation diminishes the real value of something over time.

Nominal value contrasts with real value, which factors in the effect of inflation. With real value, the nominal figure is adjusted to remove the distortions caused by price rises.

In the world of business and finance, when issuing a security, instrument or currency, the nominal value means the same as the par value or face value – it is the security’s value when it was first issued. It is the stated price that is written on the front of a security.

Share Capital: nominal value is commonly an arbitrarily assigned amount used to calculate the accounting value of a firm’s stock for balance sheet purposes – in this context the term ‘par value‘ is commonly used.

The nominal price of something – also known in the US as its current dollar price – is an estimated price that may not reflect its real market price.

For preferred stocks and bonds, however, nominal value is the amount that must be repaid when the security matures – the redemption price. In the USA, corporate, municipal and government bonds carry a nominal value of $1000, $5,000 and $10,000 respectively.

Measurements of GDP (gross domestic product) growth and personal income that do not factor in inflation are nominal values, while those that adjust for inflation are real values. 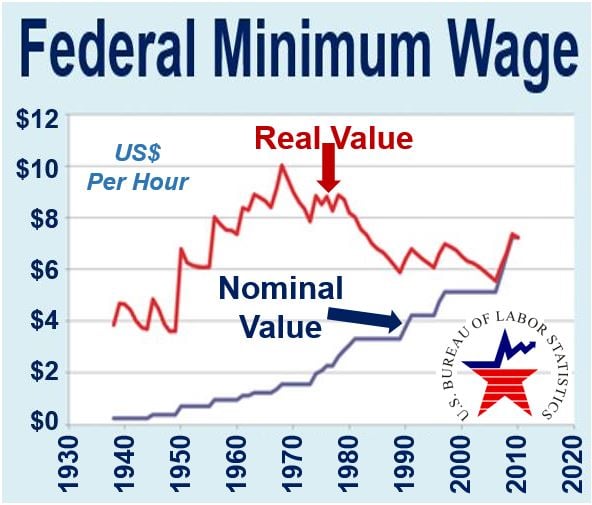 As you can see in this image, the nominal and real values tell quite different stories. The real value of America’s minimum wage reached a peak in the 1960s, and is considerably lower today. (Data Source: economicfront.wordpress.com)

According to the OECD (Organization for Economic Cooperation and Development):

“The nominal value of a debt instrument reflects the value of the debt at creation, and any subsequent economic flows, such as transactions (for example, repayment of principal), valuation changes (independent of changes in its market price), and other changes.”

“Conceptually, the nominal value of a debt instrument can be calculated by discounting future interest and principal payments at the existing contractual interest rate(s) on the instrument; the latter may be fixed rate or variable-rate.”

A financial instrument or security may have one value written on it, which is more or less than what people are willing to buy it for in the marketplace.

The amount written on the document is its nominal value, while how much it could be sold for now is its market value.

The nominal value of a financial instrument such as a bond or stock does not change until maturity, while its market value changes according to the impact of inflation and the level of demand.

Market value also means the market capitalization of a publicly-traded company. It is calculated by multiplying its current share price by the total number of its outstanding shares.

We do not calculate something’s nominal value, because it is stated on the document. The real value of something allows us to make comparisons spanning different moments in time. If a bag of coffee cost $20 in 2010 and $20 in 2016, its nominal price remained the same, but if inflation was 1% per year, its real price declined over the six years.

Imagine that a fictitious country – Doeland – had a GDP of $100 billion on January 1st, 2017. The government’s national statistics department reported a GDP of $110 billion twelve months later, on December 31st, 2017.

Does this mean that Doeland’s gross domestic product grew by 10%? The answer is ‘yes’ and ‘no’ – it depends whether you are talking in nominal or real terms.

If prices rose by 5% during that 12-month period, the two interpretations would be reported as follows:

Money illusion is the tendency to only consider the nominal value of money rather than its real value – the person ignores the inflation effect.

When there are serious economic problems in a country, its politicians are tempted to use the money illusion approach when attempting to calm their people.

“It does not mean that the pound here in Britain, in your pocket or purse or in your bank, has been devalued.”

He became the butt of cartoonists and comedians for trying to make his citizens believe that what really mattered was the pound’s nominal value.

This International Budget Partnership video explains the difference between nominal and real value. If there are changes in the price level, the speaker explains how we use that information to convert the prices we see everyday into numbers that we are actually able to compare – how to convert prices into ‘real’ values.