What is organizational structure? Definition and meaning

The organizational structure of, for example, a company is a system used to define its hierarchy. Each employee’s position is identified, including their function and who they report to within the firm. It is the way in which a company or organization is organized, including the types of relationships that exist between the directors, managers and employees.

The organizational structure, which may refer to the hierarchy of not just a business, but also any entity such as a charity, government department, agency or education establishment, is developed to establish how an entity operates and helps the organization in achieving its goals and objectives.

The organizational structure outlines how activities including task allocation, supervision and coordination are directed towards its individual aims. It is also a ‘viewing glass’ or perspective through which employees may see their organization and its environment.

Put simply, it refers to how an organization arranges its staff and jobs so that its work can be performed and its objectives and goals met.

There are many different ways in which a company or organization may be structured, depending on why it exists and what its objectives are.

For the rest of this article, I shall use the terms ‘company’, ‘business’ or ‘firm’ when referring to an organization. Unless otherwise stated, they could also refer to any other type of organization.

In a small company, face-to-face communication is common and a formal structure is probably not required. However, in larger corporations, decisions need to be made regarding the delegations of several tasks. So procedures are set up that assign tasks and responsibilities for a number of functions. It is these decisions that determine the company’s organizational structure.

In any medium- or large-sized businesses, employees’ job descriptions are typically defined by what they do, their immediate supervisors (who they report to), and who reports to them if they are managers or directors.

Eventually, these descriptions are assigned to the post within the company rather than specific people.

How these different positions are inter-related is often illustrated graphically in an organizational chart. The features of any organizational structure depend on many factors including:

There are many kinds: vertical & tall with many tiers, or flat with just a couple of levels separating top from bottom. Below are the four most common:

In a functional structure, each employee is dedicated to a single function. These clearly-defined job descriptions and expectations reduce confusion. One drawback with this type is that it makes it harder to facilitate inter-departmental communications. 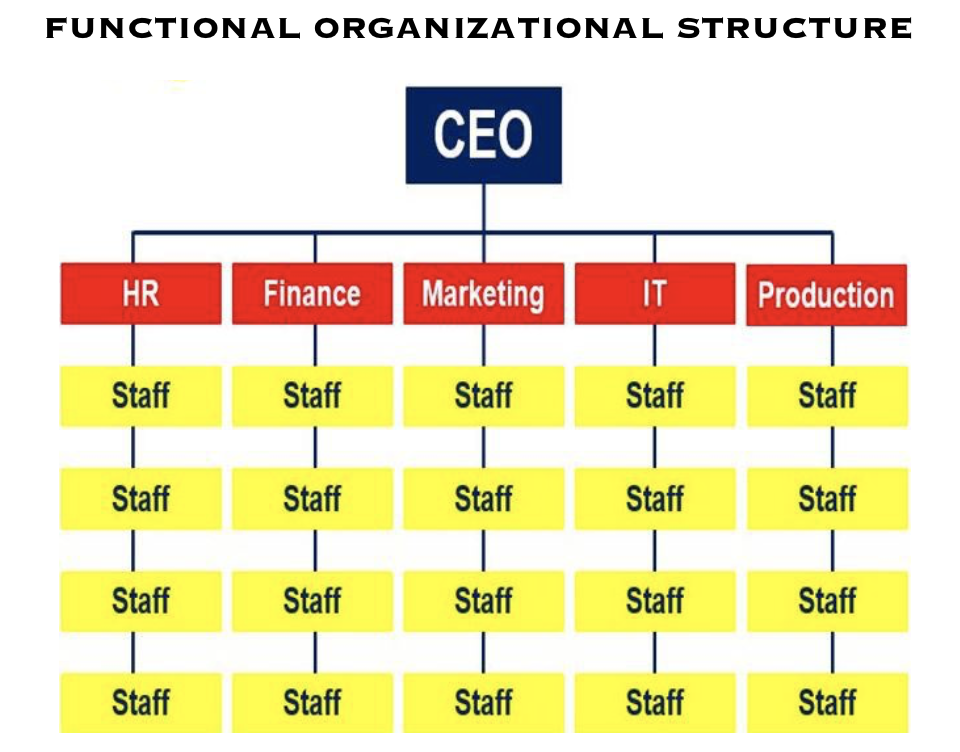 In this type of structure the organization is divided into different functional work activities – departments. A level of top managers usually oversees the work carried out by employees in each functional area.

Divisional: this type of organization structures leadership according to different projects or products. For example, while International Consolidated Airlines Group, S.A. (IAG) is the company, there are four different airlines underneath – British Airways, Iberia, Vueling and IAG Cargo. Each one operates as an individual company, but they are ultimately under IAG. 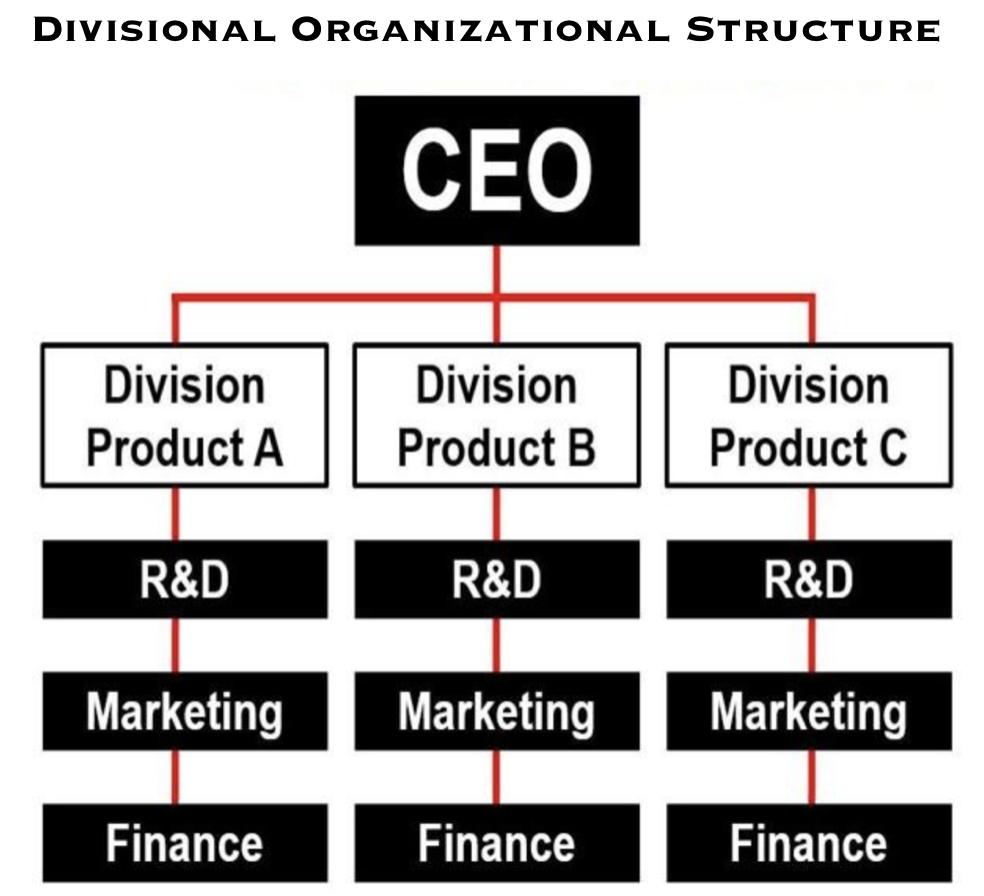 This type of organization divides the functional areas into divisions – each one with its own resources in order to operate independently. Divisions may be defined according to products/services, geographical area or any other measurement.

Matrix: in this kind of organization the workers have several different bosses and reporting lines. They report to, for example, a divisional manager, and also have project managers for certain project.

A matrix organization is more likely to experience confusion and complications, especially when staff members have to carry out conflicting tasks. 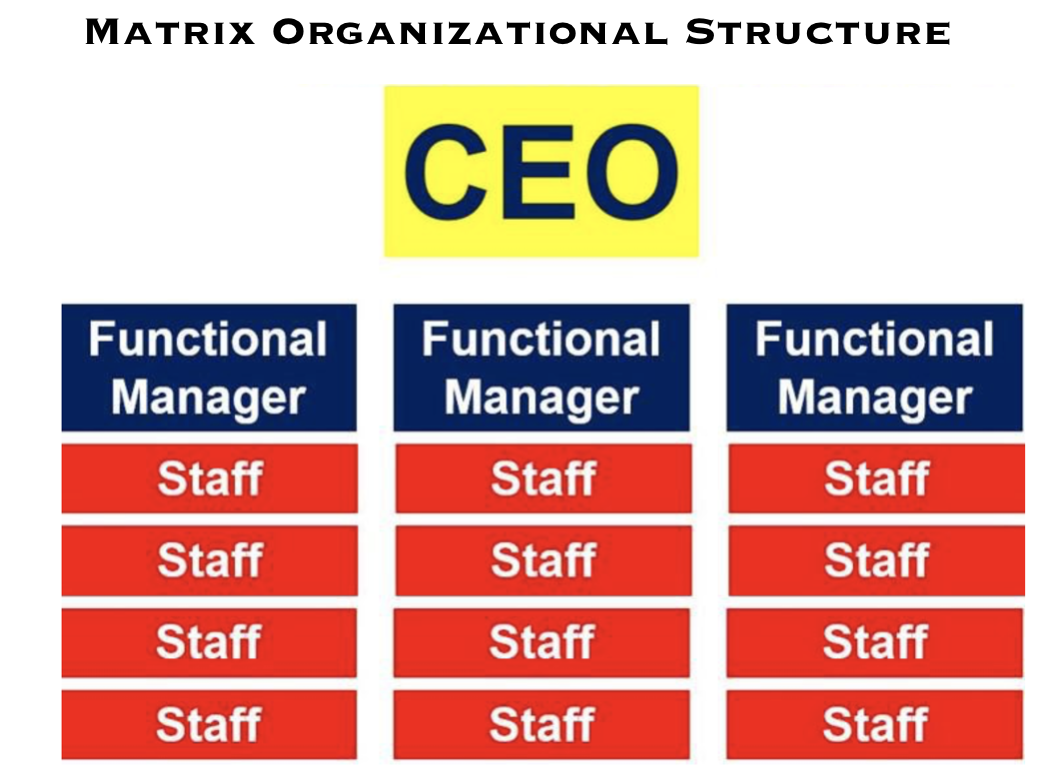 Employees are placed according to their function and the product. With this structure you get the best of both the worlds of divisional and functional structures. The business uses teams to complete tasks. Teams are formed according to the functions of each member plus the product he or she is involved in.

Flatarchy: more common in new startups and smaller companies. These types of businesses have a bit of vertical hierarchy but also flat structures, i.e. they may be more hierarchical and then have ad-hoc teams for flat structures, or vice-versa.

Flatarchy structures are very dynamic in nature and are typically constantly evolving and changing. 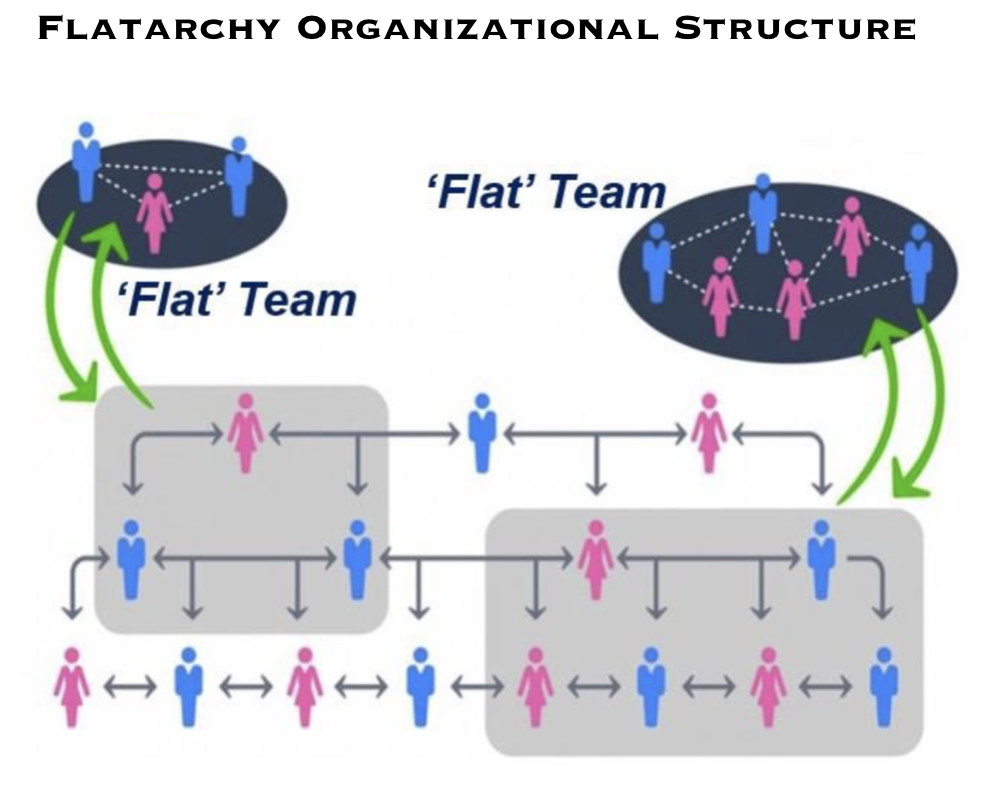 ICAS (Institute of Chartered Accountants of Scotland) says the following about flatarchy:

“Odd name, but not such an odd concept. The flatarchy aims to combine the organisational strengths of the hierarchy with the innovative freedom of the flat structure. It’s not so much an organisational structure as an ad-hoc way of working.”

“For example, this method is favoured by many companies with in-house incubators or innovation teams. The overall business maintains a relatively traditional model, but teams of people are allowed to create flat spin-offs for specific projects. This leaves employees free to explore new ideas in a more fast-paced, open environment. Tech firms such as Google have used such a practice to great effect.”

According to the Cambridge Dictionary, organizational structure is:

“The way in which a large company or organization is organized, for example, the types of relationships that exist between managers and employees.”

Video – What is organizational structure?

This MBN Video Dictionary video walks you through the definition of organizational structure with easy-to-understand terms and examples.