What is outplacement? Definition and meaning

Outplacement refers to helping recently laid off employees with their career and employment opportunities. In some cases, the employer will work with a specialist outplacement agency that locates jobs for people who have been laid off and helps them improve their job-seeking and interview techniques. Larger companies may have internal specialists.

Outplacement services in most cases are only provided for a limited period. Providing this kind of service for recently laid off workers is not compulsory – companies do so voluntarily.

Redundancy situations are stressful for both the employee and employer. Outplacement services provide the emotional and practical specialist career coaching support that will help an employee or ex-employee navigate the job market and move into a new job as soon as possible. 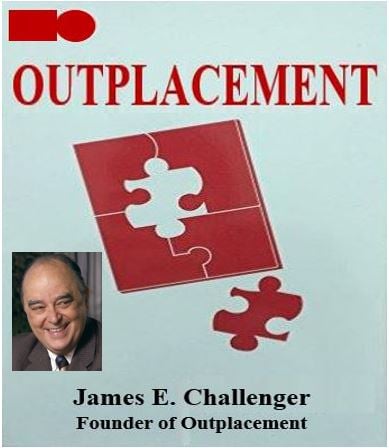 The term ‘Outplacement’ was coined by James E. Challenger, about thirty-five years ago. (1. Image of book, abebooks.com. 2. Image of James Challenger, Wikipedia)

According to the Cambridge Dictionary, outplacement is:

“Help with finding a new job that a company gives to someone they can no longer employ.”

The term is only thirty-five years old. It was coined by James E. Challenger, the founder of Challenger, Gray & Christmas, a career consultancy company based in Chicago.

With the increased rates of *rightsizing, downsizing, layoffs and redundancies, particularly since the early 1980s, companies increasingly found a need for some form of help in reducing the trauma of redundancy for both their ex-employees and those who remained.

* Rightsizing means adjusting the size of the workforce and other components of a business so that it is better able to make a profit – in most cases the workforce is reduced. Downsizing means making people redundant.

According to research, losing your job is the third most stressful experience a person can have in peacetime, after death and divorce.

Using an outplacement service offers several advantages for employees. They receive personal and career support during the transition period, they are better able to transition to a new role rapidly, and are provided with a positive environment for change.

Laying off employees occurs more frequently when these events or circumstances exist:

– Mergers: companies are merging today at 11 times the rate they used to in the 1970s.

– Acquisitions: rather than spend their money on research and development in order to have new drugs in the pipeline, the trend now in the pharmaceutical industry is to use that money to buy another company. Many other industries are following this pattern.

– Consolidations: the merger and acquisition of several smaller companies into much bigger ones.

– Offshoring: contracting out certain functions in a company to contractors abroad, usually because costs (wages) are lower.

– Relocations: when companies physically move to a geographically new area.

– Recessions: sales decline and people have to be laid off.

– A New Product: this can render another one obsolete. For example, over the past thirty years, a growing number of people are getting their news online, rather than buying printed newspapers. Major newspaper companies in the United States and Western Europe are worth a tiny fraction of what they would have fetched a couple of decades ago.

In 2013, Jeffrey Bezos, the founder and CEO of Amazon.com, agreed to buy the Washington Post from the Graham Family for $250 million. In the 1990s, the Graham Family would not have considered any offer below $1 billion. Hundreds of thousands of jobs in the newspaper industry are disappearing each year globally. Employers that offer a free outplacement service for the workers that they lay off will probably have a more loyal workforce, are less likely to be sued, and continue protecting the company or brand name.

Outplacement is rapidly becoming a common component of a severance agreement when staff is laid off. Even if the service is not provided by the employer, many people seek out specialized agencies and pay for their services privately.

If you have been employed by the same company for a number of decades, finding a new job is an unfamiliar and daunting prospect. Being coached on how to cope and proceed, learning current job searching techniques, and training in job hunting and what to do during an interview can improve a person’s employment prospects.

Specialist coaches help individuals create a professional resume (curriculum vitae, CV), cover letters, and apply for jobs. In some cases, the specialists within a company or the outside agency may also provide job leads and follow-up advice and counseling.

People seeking jobs may be provided with office space and group or individual training in all aspects of career transition and job searching. Some interactive outplacement services are available online, so the job seeker does not have to travel to his or her coach.

According to data compiled by Mullin International, the the New York-based outplacement and redeployment specialists, since 2013 sixty percent of departing employees will remain in their former employer’s ecosystem, either as suppliers, buyers, influencers or competitors. Treating your staff well pays off in multiple ways, even if they are no longer with you, the company found. As not enough employers track whether outplacement works, it is not possible to determine how effective it is. A Wall Street Journal article said that workers complained that it offered little value. However, that was seven years ago. Until an independent, comprehensive study is carried out, we will never be certain.

“When an employee leaves an organization, it is important they feel that the company is there to support and respect them through the transition.”

“I think every company going through organizational change understands they have a social responsibility to provide a positive experience to those who are transitioning,” he said. Not only is it the right thing to do, but it also protects their brand and creates ambassadors.”

Consequences of no outplacement assistance

In an age of ceaseless restructuring and instant communication, companies are learning the benefits of trying to be helpful to the employees that they have to make redundant, and the harms if they don’t.

Large companies can create enormous ill will and even tarnish their brand name if they do not handle the redundancy process properly. In The Black gave the example of British bank Barclays, which earlier this year axed one hundred employees in its Singapore office.

Barclays Singapore employees had already suspected that many of them were in for the chop when the news leaked a few weeks before the official announcement.

However, when Barclays announced the redundancies shortly before the Chinese New Year holiday, shocked and resentful employees went public with savage complaints about the lack of outplacement support and unfair treatment.

Bitter outcries these days can spread rapidly and hurt the brand. Angry workers can lash out in Facebook, Twitter and other online social media networks and forums. Newspapers rapidly pick up on this and amplify the social media reaction, as they did with Barclay’s decision.

If workers then pursue legal action and keep up the pressure online, the issue can remain in the public eye for a very long time, and damage the morale of those who were not fired.

In fact, seemingly poorly handled redundancies can result in valuable staff leaving the company. Those who were not laid off start updating their resumes just in case they end up in the same way.

Peter Wilson, National President and Chairman of AHRI (Australian Human Resources Institute), explained that according to US studies, businesses that reduced their workforce by 10% typically ended up losing another 25% of their staff voluntary over the next thirty-six months. This made it much harder for them to cope when business picked up.