What is a patent? Definition and meaning

A patent registers a person’s invention and allows him or her to take legal action against any person who uses, makes, imports or sells that invention without permission. If you are the owner of an invention, it grants you a right, preventing other people from copying it, or using it in any way without your permission.

A patentable invention may be a physical or abstract thing. It could be a product or a process that provides a new technical solution to an existing problem.

A method of doing something, a technical improvement, the functioning of certain objects, or the composition of a new product may be patented.

When your application is approved, you are legally granted the exclusive right to make and sell a process or product for a given period.

Patents are valid for twenty years from the date you filed them. Make sure you remember to keep up your annual payments, otherwise that protection will vanish.

The World Intellectual Property Organization (WIPO) describes a patent as being “an exclusive right granted for an invention, which is a product or a process that provides, in general, a new way of doing something, or offers a new technical solution to a problem.” 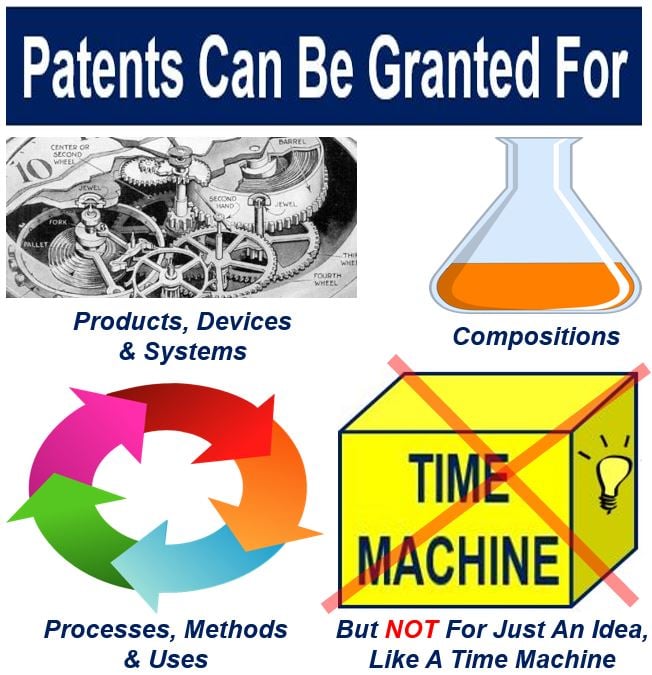 You cannot just think up something and have it patented. You need to explain in fine detail how it would work and how your invention is new and unique, and solves a problem. If mere ideas could be patentable, without having to invent how they worked, I could sit with 40 people and think up 20,000 ideas and patent them all. If thousands of other people did the same as us, it would not be long before nobody would be allowed to research and develop anything.

Patents, trademarks and copyrights are examples of intellectual property. Intellectual property refers to creations of the mind, including inventions, artistic and literary works of arts, musical compositions, symbols and designs.

As soon as your invention is patented, not only do you have protection from others taking advantage of your invention, but also you can use it to get funding for a project or your company.

Some of the most commonly-mentioned advantages to getting something patented:

Some businesses exist solely from their royalty income. You may decide to focus on your domestic market and license out the patent to businesses overseas – in other words, it is an opportunity to expand your market.

Alternatively, you may decide to focus on one part of the market – such as retail – and license your invention to somebody else in another part, such as manufacturing.

Most people would be surprised that filing a patent may have some disadvantages.

In this cutthroat global market, when a lot can happen at the blink of an eye, keeping your cards held closely to your chest is strongly advisable.

However, if you have a super invention, but nobody knows the fine detail, this secrecy is gone the moment you file a patent. In your patent application, you have to explain in great detail what your new invention is all about.

Put simply, certain technical information about your invention becomes publicly available as soon as it is patented.

Even if competitors are not allowed to exactly copy what you did, with a good team of inventors and clever patent lawyers, as soon as they know all the science and technology that you used, they can then start working on a similar product, without breaking patent law.

Registering a patent costs money – you will have to spend time and money, even if your application is unsuccessful.

Suing somebody can be very expensive. Even if you are likely to win your case and get paid lots of compensation, there is a risk that you could run out of money halfway through.

The United States Patent and Trademark Office says that there are three kinds of patents:

Etymology is the study of the origin of words. Somebody who specializes in a word’s history and origin is an etymologist.

According to the Etymology Online Dictionary, in the English language, the term dates back to 14th-century Britain, when the word ‘patent’ meant an ‘open letter or document from some authority’.

The verb ‘to patent’ in the 1670s in Britain meant ‘to obtain right to land’. The term expanded to include ‘to copyright an invention’ in 1822.

A trademark is a symbol, design or phrase that identifies and distinguishes the source of a product. Examples of trademarks are logos, slogans and brand names. The trademark of Apple Inc., the American multinational technology giant based in Cupertino, California, is a drawing of an apple with a piece bitten off.

The word has the following spellings: 1. USA – trademark. 2. Canada – trade-mark. 3. UK and others – trade mark. However, over the past twenty years the American spelling has been appearing in the UK and Canada with increasing frequency.