What is political capital? Definition and meaning

Political capital refers to the goodwill, trust and influence that politicians earn or build up with the public through the pursuit of policies that people like or respect. It is then possible to use this goodwill to push through unpopular legislation without severely damaging their support or that of their political party, and also to win elections.

This type of capital may also be spent on other politicians, not just members of the public. The goodwill is a kind of invisible political currency that lawmakers can use to mobilize the electorate or spend on policy reform.

For the long-term success of any politician, political capital is vital – without it their chances of winning elections or effectively leading the nation during difficult times is virtually impossible. 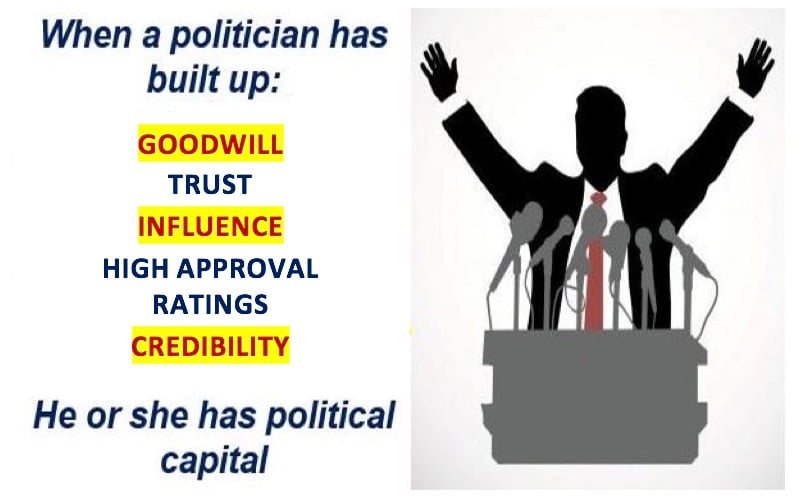 Politicians need to build up political capital in order to push through unpopular legislation later on, get people to follow their lead, and to win elections.

At the beginning of a leader’s term in power, just after winning elections, they are less concerned about goodwill and political capital. However, when they re-evaluate their chances of being re-elected – during the final year – it all becomes very important again. That is why government spending suddenly jumps from about 12 months before a general election.

Imagine that Jane Doe is elected President of a fictitious country called Everland. One of the first bills she signs is a sweeping tax cut one that will improve the take-home pay – pay after tax and insurance contributions are deducted – of virtually every salaried employee across the nation.

By pushing through the bill and signing it, Ms. Doe and her party have gained a significant amount of ‘goodwill’.

This goodwill – political capital – can be used later during her 4-year term when Ms. Doe and her party try to push through a rather unpopular health care reform bill.

Some people say there are two types – representative and reputational capital.

Fomer British Prime Minister Margaret Thatcher (1925-2013) won three general elections. Many electors who did not agree with her politics still voted for her because of her consistency on policy and ideological views. “What you see is what you get,” and “At least with her you know where she stands,” voters said of her.

Political capital – be it representative or reputational – is the result of relationships between policy (legislative rewards/penalties), opinion (public impressions), and political judgment (prudent decision-making).

At a simple level, political capital may just refer to the influence that certain politicians have to get things done, regardless of the reasons. An article published in the South Dakota State University website says:

“Powerful government officials can make things happen— ‘it’s who you know, not what you know.’ For instance, representatives and senators can bring projects and funding to your community through their places in the government power structure.”

Although political capital may be considered as a type of currency, it is not the same as money in the bank. When you place money in the bank, it stays there, it does not melt away if you do not touch it. The amount of money you can have in your account, in theory, is limitless. With the political currency the amount is limited, it also always eventually melts and shrinks.

In an article published in the University College London website, Dr. Mark Bennister and Dr. Ben Worthy write that political capital is both personal – in terms of the politicians own skill – and political – in terms of institutional resources, context and events.

Lawmakers’ (politicians’) attributes and skills can use political capital to shape the context in which they operate, creating a compound accumulation effect as the political and personal reinforce each other.

However, when politicians are in over their heads and their flaws and personality weaknesses are exposed, the compound accumulation effect can shift into negative territory. When US President George W. Bush was re-elected on 4th November, 2004, he said he intended to spend the ‘political capital’ he had built up campaigning for the White House. (Image: Wikipedia)

Political capital, which is finite, is not the same as money in the bank, which can keep growing indefinitely. Political capital is also subject to depreciation as part of ‘a natural trajectory’ during which support and power is lost over time.

While the loss of goodwill, support and power is inevitable, how this happens and at what rate is not always the same.

Drs. Bennister and Worth wrote:

“Often leaders begin with high levels that slowly dwindle but some leaders build it more slowly. The most unfortunate never have it. The article concludes with a look at a selection of politicians who managed to turn around an initial lack of political capital or even regain it.

Former Prime Minister Margaret Thatcher was nicknamed ‘The Iron Lady’ by Soviet Russia in the 1980s. Her reputation for sticking to her guns earned her tremendous political capital, which helped her win three general elections – in 1979, 1983 and 1987.